With retirement of the space shuttle imminent, and the commercial space industry burgeoning, NASA is searching for safe and innovative methods for carrying payload and passengers to the Moon, Mars, and beyond. The search for new vehicles has been going on for some years now, with a variety of plans being pursued and countless technologies being developed.

One of the early quests for a shuttle replacement involved the X-33 program, initiated in 1996. The goal of the X-33 program was to reduce the business and technical risks associated with space travel so that private industry could build and operate the next-generation reusable launch vehicle (RLV) by first designing, constructing, and flying a half-scale prototype that would demonstrate (in flight) the technologies needed for the new RLV.

The X-33 was intended to pave the way for a full-scale, commercially developed RLV to be built by the Lockheed Martin Corporation after the turn of the century. The full-scale RLV would dramatically reduce the cost of putting payloads into space and, ultimately, replace the space shuttle.

The Lockheed Martin design for the X-33 was selected from three designs submitted to NASA. The concept used a wedged shape coupled with an aerospike rocket engine to propel the vehicle, and a rugged metallic thermal protection system to shield against the extreme variations in temperature the craft would endure during take off and reentry.

It was designed to take off vertically like a rocket and land horizontally like an airplane after having reached hypersonic speeds and altitudes of up to 50 miles.

The X-33 program was managed by the Marshall Space Flight Center and the craft would have been launched at a special site on Edwards Air Force Base, in California.

Due to technical problems with the vehicle’s composite liquid hydrogen tanks, though, the X-33 program was cancelled in February 2001, with Lockheed Martin given the option by NASA to continue development of the craft on its own.

Science developed for the vehicle prototype proceeded in many directions, including toward advancing knowledge needed to create the next-generation RLV, and toward creating a small fiber-optic-based temperature sensor that has found uses as widespread as automating the oil and gas industry to ensuring the structural integrity of large concrete dams.

In 1996, Systems and Processes Engineering Corporation (SPEC), of Austin, Texas, undertook a NASA Small Business Innovation Research (SBIR) contract with Langley Research Center to develop a compact and lightweight digital thermal sensing (DTS) system for monitoring the cryogenic tanks on the X-33 prototype aircraft. That technology, along with a processor developed by SPEC for Goddard Space Flight Center, was space-qualified and integrated into several NASA missions.

SPEC formed an ancillary organization, SensorTran, Inc., to continue work developing the DTS technology for a variety of commercial and industrial applications.

By the year 2000, SensorTran was employing the DTS technology around the world in the oil and gas industry, the electrical power industry, in processing plants, and to test structural integrity of large structures.

Now in its second generation, the commercially available device, billed as the SensorTran 5100, is an industry leader because of its performance, ruggedness, and cost-effectiveness. The device measures temperature along an optical fiber by monitoring the amplitude of backscatter from a laser pulse through the fiber, with temperature profiles accurate to half a degree Celsius along full kilometers of optical fiber. By measuring temperature over the entire surface of an area, the SensorTran 5100 provides thousands of measurement points to monitor actual conditions. These extensive real-time data allow operators to make better decisions about performance, to reduce operating costs, and to increase performance and return on investment.

In the oil industry, it helps companies make the right decisions for the operation of their oil wells by giving them clear depictions of downhole conditions. Often when downhole information is available, it is limited or vague, leaving oil companies with high levels of uncertainty, which could potentially cost valuable time and resources. The SensorTran 5100 instrument reduces this uncertainty by providing clearer pictures of well conditions, which allows for better decisions and maximizes overall productivity. Using the installed optical fiber, it measures temperature over the entire length of the well, detecting conditions at any location. It also permanently monitors conditions over time, capturing critical events as they occur, while helping reduce the risk and cost of well intervention.

The device enables users to better see conditions and events anywhere in their wells at any time, allowing them to make the right decisions.

In the power cable monitoring industry, the SensorTran device also offers a host of benefits. Traditional methods for calculating load ratings rely on estimates for cable heat dissipation under different loads and conditions. The downside of this method is that it produces overly conservative load ratings, leaving cables with significant unused capacity. The SensorTran instrument allows engineers to increase load ratings by directly measuring temperature over the entire length of a cable and under actual conditions. This provides a much more accurate picture of cable heat dissipation, which, in turn, produces a more accurate cable rating. Estimates suggest that utilizing DTS measurements can increase cable ratings by as much as 25 percent.

These higher ratings available with DTS can provide significant benefits for power companies, because they can defer new capital expenditures, deliver more power with existing infrastructure, and defer millions of dollars in planned new construction. The ratings also allow them to reduce load-shedding events and the number of blackouts and brownouts on their systems, which translate into internal benefits that help to greatly improve customer service and support future customer growth. The need for additional investment is reduced by extending the life of existing underground cables.

When problem areas in power cable lines, called hotspots, are not known or change over time, power cable operators may be routinely loading cables above thermal limits. With the SensorTran 5100, engineers can accurately pinpoint the location and severities of all hotspots, helping extend cable life by ensuring temperature limits are not exceeded. The device can even provide automatic alarms, giving operators greater confidence under critical load conditions.

SensorTran 5100 can ameliorate new cable design and operation. By designing new cables with an expected higher rating from DTS data, less expensive cables can be used. In addition, with the sensor installed from the very beginning, the conditions of the cable for its entire life can be tracked, helping better estimate cable life and optimize cable maintenance.

The benefits of this technology also extend into monitoring processing plants. With the SensorTran 5100, plant operators now have the ability to thoroughly monitor their processing vessels and plant pipelines in real time. Using standard optical fiber, the device can monitor the entire surface of any vessel, such as a reactor vessel or cryogenic tank, helping operators pinpoint the location and severity of impending insulation failure or catastrophic leaks—even on internal surfaces. The entire length of any plant pipeline can also be monitored for potential leaks.

By monitoring vessels and pipelines in real time, operators can respond quickly to leaks or spills, thus reducing downtime and improving plant safety. In addition, maintenance schedules can be optimized based on actual conditions instead of estimated guesses.

DTS can also be used to monitor the strength of large cement structures. With the SensorTran 5100, engineers now have the ability to monitor critical dam structures from the inside out, to ensure proper cement curing and sufficient integrity throughout the life of the structure. Using standard optical fiber installed throughout and around the dam structure during construction, the SensorTran 5100 can provide initial insight into the progress of cement curing to help locate any significant flaws for reinforcement. In addition, the sensor can be used over the life of the dam to precisely locate any emerging leaks throughout the dam structure. With an accurate location of leaks, corrective action can be taken to stop or reduce potential damaging effects. 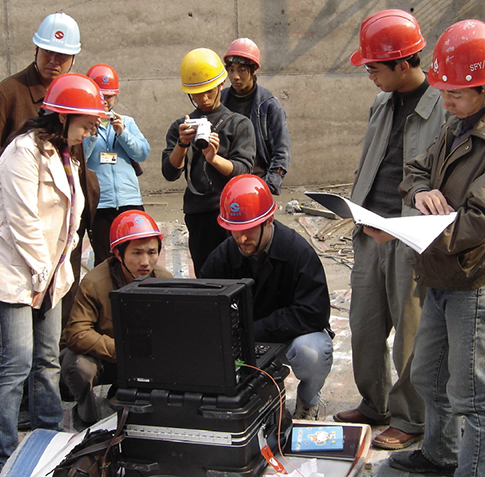 A group of engineers gathers to collect temperature data using the SensorTran 5100 on the Yu River dam construction project in the Guizhou Province of China. 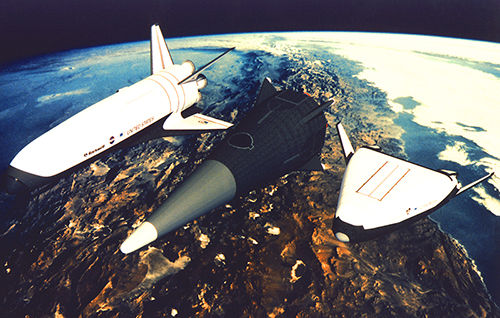 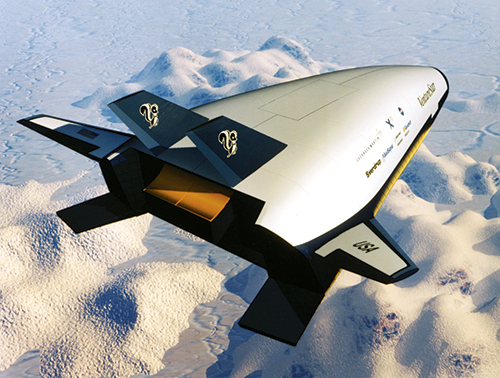 An artist’s conception of a half-scale X-33 demonstrator, one of the first visions for a space shuttle replacement, flying over a southwestern desert. The vehicle had a wedge-shaped lifting body, with two vertical fins and a pair of stub wings. At the rear was the aerospike engine, an experimental design that lacked the nozzles of conventional rockets. 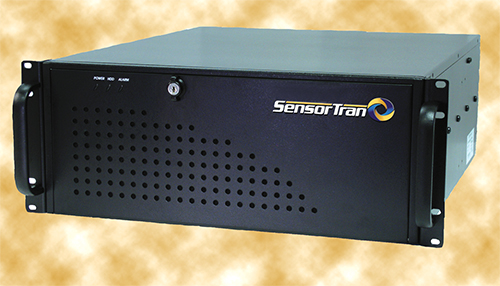 The SensorTran 5100 DTS unit is rugged, cost-effective, and precise.

The SensorTran unit relies on advanced fiber optics. The device measures temperature along an optical fiber by monitoring the amplitude of backscatter from a laser pulse through the fiber, with temperature profiles accurate to half a degree Celsius along full kilometers of optical fiber. By measuring temperature over the entire surface of an area, the SensorTran 5100 provides thousands of measurement points to monitor actual conditions. This precision is useful in myriad industries.