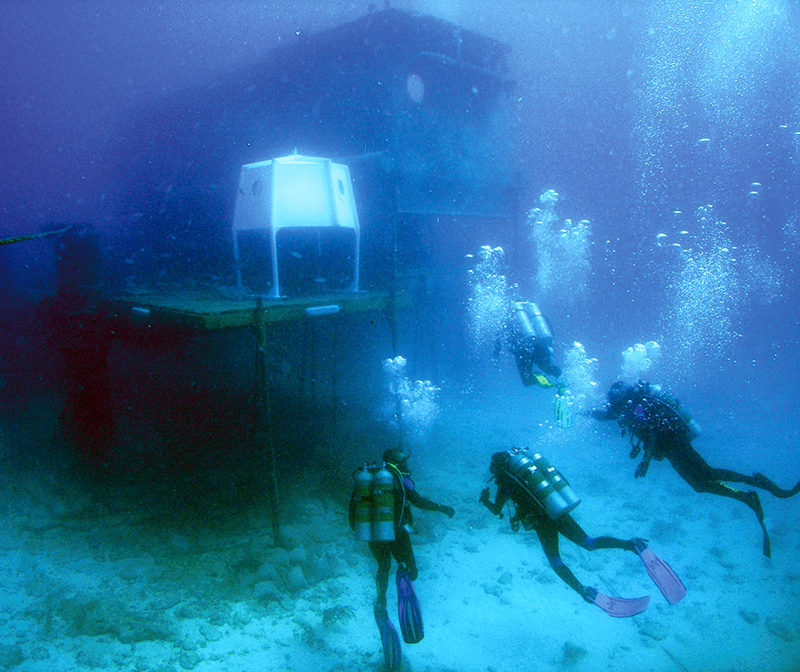 Like the environment of space, the undersea world is a hostile, alien place for humans to live. But far beneath the waves near Key Largo, Florida, an underwater laboratory called Aquarius provides a safe harbor for scientists to live and work for weeks at a time.

Aquarius is the only undersea laboratory in the world. It is owned by the National Oceanic and Atmospheric Administration (NOAA), administered by NOAA’s National Undersea Research Program, and operated by the National Undersea Research Center at the University of North Carolina at Wilmington. Aquarius was first deployed in underwater operations in 1988 and has since hosted more than 200 scientists representing more than 90 organizations from around the world.

For NASA, Aquarius provides an environment that is analogous to the International Space Station (ISS) and the space shuttle. As part of its NASA Extreme Environment Mission Operations (NEEMO) program, the Agency sends personnel to live in the underwater laboratory for up to 2 weeks at a time, some of whom are crew members—or “aquanauts”—who are subjected to the same tasks and challenges underwater that they would face in space. In fact, many participants have found the deep-sea diving experience to be much akin to spacewalking.

To maintain Aquarius, the ISS, and the space shuttle as safe, healthy living/research habitats for its personnel—while keeping costs in mind—NASA, in 1997, recruited the help of Conroe, Texas-based Invocon, Inc., to develop wireless sensor technology that monitors and measures various environmental and structural parameters inside these facilities.

This project, funded through a Johnson Space Center Small Business Innovation Research (SBIR) contract, focused on developing wireless sensors to help cut back on the integration costs associated with wired sensors. It included the conceptual design, fabrication, and demonstration of a battery-powered, miniature, wireless temperature sensor. NASA and Invocon agreed to take Invocon’s existing wireless network communication system and combine it with various microelectromechanical systems (MEMS) sensors. The innovation consisted of a PC interface unit, a graphical user interface, and multiple wireless sensors that are each equivalent in size to a stack of five quarters.

Upon completion of the miniature wireless sensor technology, Johnson’s Human Exploration and Development of Space program (now part of the Space Operations Mission Directorate) sought to apply it to the space shuttle to acquire temperature data from several fundamental locations in and around the shuttle crew compartment and avionics equipment. High above the depths of Aquarius, the sensor system has flown and operated successfully on space shuttle missions STS-92, STS-96, STS-97, STS-100, STS-101, STS-104, STS-106, and STS-108. Further use of the technology is being investigated for monitoring carbon dioxide concentrations onboard the ISS, in the crew’s sleeping quarters, and in regions of reduced airflow.

After emerging from the sea and shooting high into the heavens, Invocon’s wireless sensor system has made a terrestrial landing as a product called MicroWIS-CO2. This commercial offspring is a wireless, remote, low-power, carbon dioxide data-acquisition system for near-static sensing and recording applications. It uses a non-dispersive infrared diffusion method for carbon dioxide measurement. Carbon dioxide diffuses into the sensor’s optical chamber, and molecules of the gas absorb infrared light. This absorption is measured to derive the carbon dioxide concentration.

MicroWIS-CO2 offers three modes of data transfer once the carbon dioxide level is determined. The unit can transmit data in real time to an associated receiver; store information in a memory bank for later downloading, via radiofrequency, to either the receiver or a PC; or conveniently combine both of these modes to stream real-time information while backing it up in memory.

Invocon has also spun off several “next-generation” MicroWIS products that are configured for applications other than carbon dioxide sensing. The latest of these products, the MicroWIS-XG, can be used for sensing environmental, temperature, strain, and pressure parameters, for example.

In the area of construction, one of these next-generation systems was used to monitor external grout pressure during the building of three tunnels in the Netherlands. When boring tunnels through the ground, proper grout pressure is critical, because it controls the amount of grout that is deposited on the exterior of the tunnel, which ultimately determines the strength of the water-seal and durability of the tunnel throughout its useful life. Another important reason to maintain proper grout pressure is that it influences surface elevation of the ground directly above the tunnel. When the grout pressure becomes too low during construction, the surface can sink. This becomes problematic in areas where much of the land is at or below sea level.

Dutch Government regulations required that strict controls were used during construction in order to ensure that the tunnels would maintain their integrity for 100 years or longer. The MicroWIS technology was called upon to monitor grout pressure at several locations during the building phase to verify that the project met quality and safety requirements. The wireless nature of the system greatly simplified the building process and eliminated any risks that could have come from wires and power cables that could have been cut when exposed to the boring machines used to dig through the ground to assemble the tunnels.

In 2002, MicroWIS systems were used by the University of Houston to study stresses during construction and testing of a local bridge. This application stemmed from concerns that certain sections of a bridge may actually be compromised in the construction process due to inadequate support during handling and installation.

To test this theory, 112 MicroWIS units were mounted at key locations on the bridge—between main box girders and on temporary k-frames—to determine stress loads during the 6-month construction process. Data sampling took place once every 8 minutes or once every 30 minutes, depending on the stage of construction. The units measured the strains induced on the bridge beams by both mechanical loads and diurnal temperature effects. The measurements taken and the resulting data produced by the units prevented the builders from adding any unnecessary loads or strains to the sections of the bridge in question.

Since developing the sensors for NASA, Invocon has gone on to manufacture monitoring solutions that have flown on 20 space shuttle missions, including the latest STS-114 mission. By continuing to support NASA with new technologies bound for space, the company is reaping the benefits of bringing new ideas down to Earth. 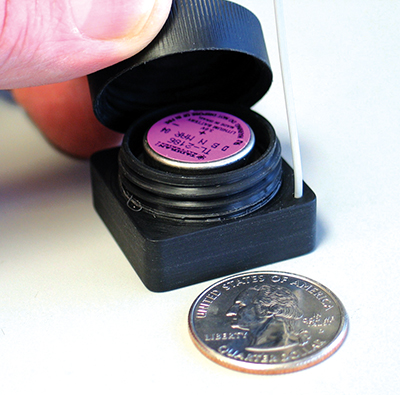 The miniature wireless sensor developed for NASA is equivalent in size to a stack of five quarters. The technology has helped NASA acquire important data to keep astronauts’ remote living quarters safe and has been applied to a variety of sensing applications on Earth.