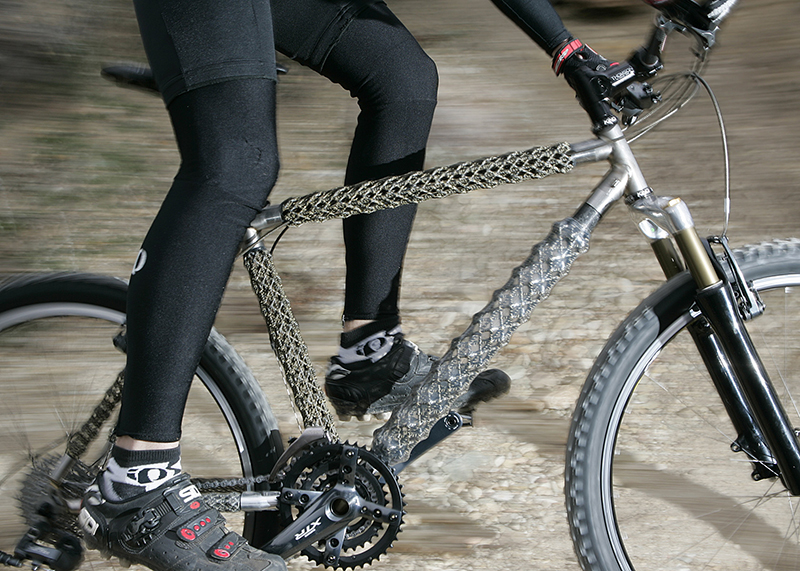 NASA has invested considerable time and energy working with academia and private industry to develop new composite structures that are capable of standing up to the extreme conditions of space. Over time, such technology has evolved from traditional monocoque designs, in which the skin of a metal structure absorbs the majority of stress the structure is subjected to, to more complex, geometric designs that not only offer strength to counteract stress loads, but also add flexibility.

With an eye to next-generation space-deployable structures, NASA is continuing to identify advanced composite materials and designs that could eventually become the mainstay of future missions, be it in the framework of advanced spacecraft or in the form of extraterrestrial outposts constructed for long-term space habitation.

One of the structures in which NASA has made an investment is the IsoTruss grid structure, an extension of a two-dimensional “isogrid” concept originally developed at McDonnell Douglas Astronautics Company, under contract to NASA’s Marshall Space Flight Center in the early 1970s. IsoTruss is a lightweight and efficient alternative to monocoque composite structures, and can be produced in a manner that involves fairly simple techniques.

In the early 1990s, NASA’s Langley Research Center helped fund a 7-year research project that led to the development of IsoTruss. David Jensen, a professor of civil engineering at Utah’s Brigham Young University (BYU) and director of the school’s Center for Advanced Structural Composites, invented the technology, with assistance from several graduate students and further funding from the National Science Foundation and the Federal Highway Administration.

Passionate about aerospace, Jensen originally thought that this would be the area in which IsoTruss would attain the most success. The support he received from NASA was for development of space applications, including evaluation of a proposed solar sail that could propel a craft through space by harnessing solar flux. According to him, a very lightweight structure would be required to stretch the solar sail out, because of the high costs associated with launching mass into space.

BYU inked a licensing agreement with space suit and soft materials developer ILC Dover LP in February 2002 to evaluate use of Jensen’s patented IsoTruss technology on NASA’s conceptual solar sail-driven spacecraft. Though the project never came to fruition, Jensen continues to explore aerospace applications based on his initial support from NASA to create the technology.

BYU has licensed the IsoTruss technology for use in the United States, China, and Japan; negotiations are in process for other parts of the world.

The technology is garnering global attention, because it is extremely lightweight and as much as 12 times stronger than steel (depending on the application). It is typically constructed of carbon and/or fiberglass filaments that are interwoven in an open-lattice design—longitudinal and helical reinforcement members forming triangles and pyramids that distribute stresses. (The “iso” and “truss” in IsoTruss represent the isosceles triangles that truss the pyramids that ultimately give the structure its strength and stiffness.) According to Jensen, the breakthrough is not the composite materials used to fabricate the structure—as any fiber and resin combination can be used—but the three-dimensional, spider web-like structural design itself, since it eliminates the weight of comparable structures, such as solid wood and tubular metal poles. In essence, a 90-pound IsoTruss composite structure could replace a 1,000-pound steel pole and still offer the equivalent strength.

There are many cost and environmental advantages to IsoTruss, too: It is less expensive to manufacture, transport, and install than wood or steel; there is little-to-no maintenance needed, as it does not rust, corrode, or rot; it is impervious to insect and woodpecker damage; it is easy to repair and easy to replace, if necessary; it does not contain hazardous or toxic chemicals; and it can be made from fully recyclable materials. When used as utility poles, IsoTruss structures can serve as an environmentally friendly alternative to wooden poles, which are treated with chemical preservatives that could potentially harm the ground and water supplies.

Furthermore, an IsoTruss structure offers superior wind resistance. Because of its open-lattice design, wind drag is typically reduced by 30 percent, as compared to a traditional wooden pole. This means that an IsoTruss pole is much less susceptible to breaking or falling when subjected to high winds—another reason why it is a good match for utility-related applications.

IsoTruss utility pole applications are still on the horizon, albeit with plenty of potential. According to a Wall Street Journal article from 2000, the United States alone requires approximately 4 million new utility poles each year just to replace rotting wood poles, while rapidly developing Third World countries still constructing their power and communications distribution systems will require hundreds of millions of poles over the next decade.

Meanwhile, IsoTruss has taken off in the form of meteorological towers. IsoTruss Structures Inc., a Utah-based licensee of the technology, is selling and installing meteorological towers that are 270-feet high and one-tenth the weight of steel, plus less expensive to manufacture and easier to install than steel towers. These tall towers are designed to handle harsh weather conditions, including radial ice loads up to 1/2-inch thick and strong winds up to 90 miles per hour.

The meteorological towers have been fitted with wind instrumentation and installed near the mouth of Spanish Fork Canyon, Utah; in Arizona and New York; and on U.S. Air Force bases, where they are monitoring meteorological conditions in preparation for the installation of large wind turbines that generate electricity from wind power. Since wind characteristics vary with height, these towers provide more accurate wind speed and meteorological measurements, enabling better prediction of the potential long-term energy efficiency of tall wind turbine towers. At the Spanish Fork site, for example, tests are being conducted to evaluate the economic and energy-saving effects of the tower.

IsoTruss structures can also be employed as preassembled, three-dimensional, corrosion-resistant reinforcement for concrete structures and as standalone structural columns. They were recently used as tilt-up wall braces in constructing the South Towne Exposition Center, in Sandy, Utah. At this site, it took just two workers to install these wall braces (one to hold a brace in position and one to install the anchor), as opposed to the five workers required to install the neighboring steel braces (four to hold and one to install).

IsoTruss Structures Inc. and ATK Thiokol Propulsion have agreed to collaborate on the analysis and distribution of composite lattice structures for commercial and military products. The pact will enable the two companies to provide application-specific solutions to customers in the military, international aerospace industry, and commercial markets that rely on high-performance, lightweight structures.

In the realm of sports, there is one unique application that may eventually see the light of day as a commercial product. Under the tutelage of Jensen, a group of BYU engineering students used the intertwining IsoTruss composite materials (carbon fiber and Kevlar, in this case) to construct a mountain bike. The longitudinal frame tubes were designed to resist all axial and bending loads, while other IsoTruss parts were used to support transverse sheer and torsion loads. A clear sheathing was placed over some of the tubes to protect them from the dirt and mud that can kick up during a ride. The students involved with the project are touting the bike frame to be lighter, more aerodynamic, and less breakable than many top-of-the-line carbon fiber frames.

IsoTruss® is a registered trademark of Brigham Young University.

Kevlar® is a registered trademark of E.I. DuPont de Nemours and Company.

Abstract
Advanced composite materials and designs could eventually be applied as the framework for spacecraft or extraterrestrial constructions for long-term space habitation. One such structure in which NASA has made an investment is the IsoTruss grid structure, an extension of a two-dimensional isogrid" concept originally developed at McDonnell Douglas Astronautics Company under contract to NASA's Marshall Space Flight Center in the early 1970s. IsoTruss is a lightweight and efficient alternative to monocoque composite structures and can be produced in a manner that involves fairly simple techniques. The technology was developed with support from NASA to explore space applications and is garnering global attention because it is extremely lightweight; as much as 12 times stronger than steel; inexpensive to manufacture transport and install; low-maintenance; and is fully recyclable. IsoTruss is expected to see application as utility poles and meteorological towers for the aforementioned reasons and because its design offers superior wind resistance and is less susceptible to breaking and woodpeckers. Other applications such as reinforcement for concrete structures stand-alone towers sign supports prostheses irrigation equipment and sporting goods are being explored." 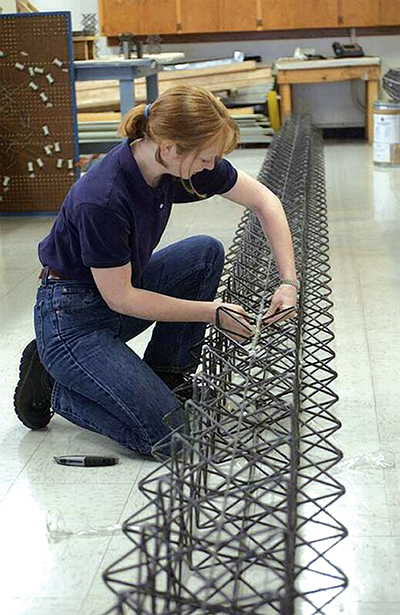 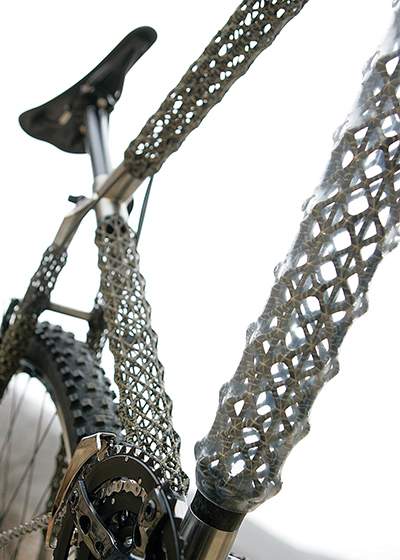