In the increasingly sophisticated world of high-definition flat screen monitors and television screens, image clarity and the elimination of distortion are paramount concerns. As the devices that reproduce images become more and more sophisticated, so do the technologies that verify their accuracy. By simulating the manner in which a human eye perceives and interprets a visual stimulus, NASA scientists have found ways to automatically and accurately test new monitors and displays.

The Spatial Standard Observer (SSO) software metric, developed by Dr. Andrew B. Watson at Ames Research Center, measures visibility and defects in screens, displays, and interfaces. In the design of such a software tool, a central challenge is determining which aspects of visual function to include—while accuracy and generality are important, relative simplicity of the software module is also a key virtue. Based on data collected in ModelFest, a large cooperative multi-lab project hosted by the Optical Society of America, the SSO simulates a simplified model of human spatial vision, operating on a pair of images that are viewed at a specific viewing distance with pixels having a known relation to luminance.

The SSO measures the visibility of foveal spatial patterns, or the discriminability of two patterns, by incorporating only a few essential components of vision. These components include local contrast transformation, a contrast sensitivity function, local masking, and local pooling. By this construction, the SSO provides output in units of “just noticeable differences” (JND)—a unit of measure based on the assumed smallest difference of sensory input detectable by a human being. Herein is the truly amazing ability of the SSO—while conventional methods can manipulate images, the SSO models human perception. This set of equations actually defines a mathematical way of working with an image that accurately reflects the way in which the human eye and mind behold a stimulus.

The SSO is intended for a wide variety of applications, such as evaluating vision from unmanned aerial vehicles, measuring visibility of damage to aircraft and to the space shuttles, predicting outcomes of corrective laser eye surgery, inspecting displays during the manufacturing process, estimating the quality of compressed digital video, evaluating legibility of text, and predicting discriminability of icons or symbols in a graphical user interface.

Radiant Imaging Inc., of Duvall, Washington, develops systems and software for testing and measuring color and light for lighting and display system designers, developers, manufacturers, and other users. To make use of the SSO’s defect detection abilities in its work, the company licensed the software from Ames.

Already focused on the human perception of color and light in its line of colorimeters and photometers, Radiant Imaging sought this proven model as a means to design a system that reflected more perceptually meaningful criteria than gearing toward some scientific spectral characteristics. Ames provided training and consultation to the engineers at Radiant Imaging regarding the SSO and related theory. The SSO software was then used to develop the TrueMURA Analysis Module. The module was incorporated into Radiant Imaging’s proprietary ProMetric 9.1 system, originally created to provide automated defect detection analysis for flat panel display (FPD) systems. When used in conjunction with the ProMetric Series Imaging Colorimeters, the new software module provides a complete characterization and testing system for FPDs—especially LCD panels and displays—in research and development and production processes.

Automatic simulation of the human perception of display defects or blemishes—mura—is difficult, because human visual recognition of uniformity variations and other defects is dependent on many factors including brightness, color, and spatial relationships. Most available image analysis techniques are based on simple techniques which identify gross defects, but do not accurately discriminate JND. TrueMURA allows a grading of LCD mura in a way designed to mimic human observers, ignoring mura that cannot be seen by humans and ranking those likely to be distinguished by humans into different categories. TrueMURA is thus well-correlated to human perception of defects in brightness, color, and blemishes, and provides useful, quantifiable analysis of an FPD image.

Radiant Imaging released the TrueMURA Analysis Module for ProMetric 9.1 in December 2007. This is the first commercial system available to provide advanced image analysis algorithms for computing JND. Augmenting the defect analysis functions offered by ProMetric 9.1, the TrueMURA Analysis Module has already been successfully integrated into thousands of systems in use worldwide.

The TrueMURA Analysis Module is now being integrated into Radiant Imaging’s ProMetric Production Test Sequencer, used by display manufacturers to automate production testing of FPDs and projectors. By further automating defect detection, TrueMURA is expected to increase the speed and reduce the cost of product testing. While the primary applications for TrueMURA will continue to be display image quality, other applications for measuring visual uniformity are under investigation and anticipated in the near future.

TrueMURA™ and PM Series™ are trademarks, and ProMetric® is a registered trademark of Radiant Imaging Inc.

Abstract
Radiant Imaging Inc., of Duvall, Washington, licensed the Spatial Standard Observer (SSO) software from Ames Research Center. The SSO simulates a simplified model of human spatial vision, operating on a pair of images that are viewed at a specific viewing distance with pixels having a known relation to luminance. The SSO software was used to develop the TrueMURA Analysis Module, incorporated into Radiant Imaging's ProMetric 9.1 system. When used in conjunction with the ProMetric Series Imaging Colorimeters, the new software module provides a complete characterization and testing system for flat panel displays, especially LCD panels and displays. 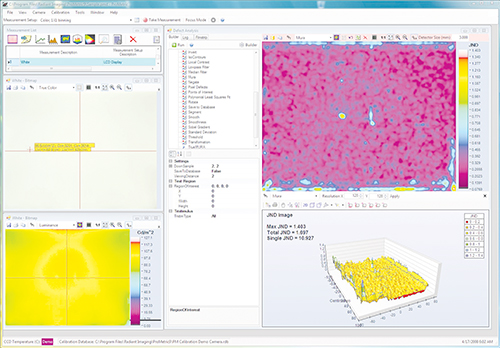 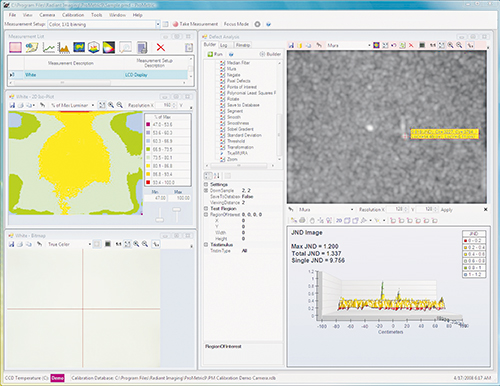 The Spatial Standard Observer is particularly useful for the inspection of displays during the manufacturing process.