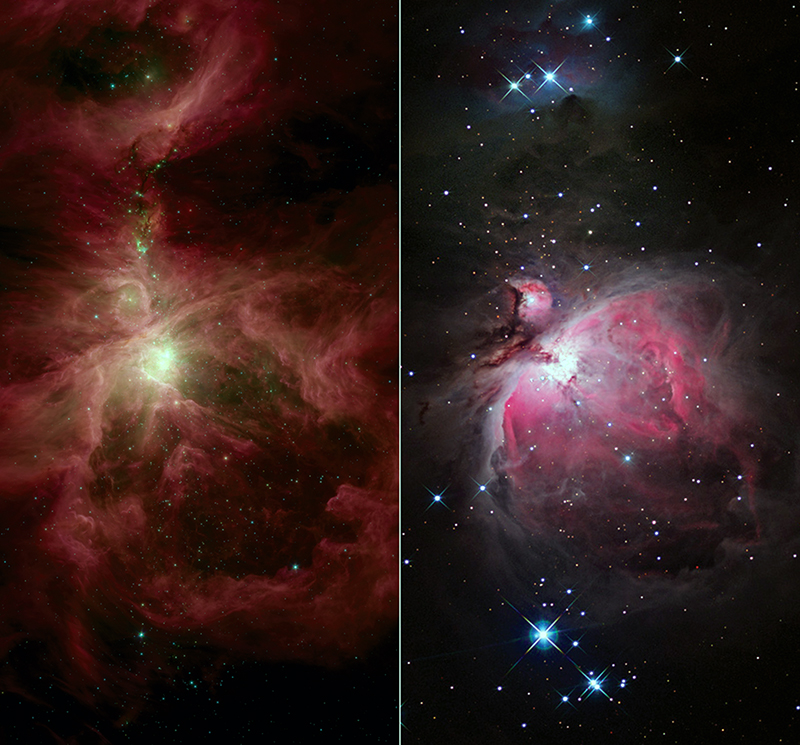 Consider the anatomy of a rainbow: From the inner arch, violet shifts to blue, then green, yellow, and red. Contained in the rainbow is the spectrum of light that our eyes take in and translate into images of the world around us. But the human eye only registers a minute percentage of the electromagnetic spectrum, which theoretically stretches into infinity beyond the wavelengths (between 0.38 and 0.76 micrometers) of visible light. Past violet, the wavelengths of ultraviolet, X-rays, and gamma rays cramp closer and closer together. Going in the other direction, past red, stretch the expanding wavelengths of infrared, terahertz, microwaves, and radio waves. It is within these invisible ranges that many of the secrets of our universe remain.

Much of the universe is not observable using visible light. Clouds of cosmic gas and dust obscure the gaze of traditional telescopes, and the ongoing expansion of the universe following the Big Bang further complicates observation of distant galaxies. As the galaxies race away from our position, the visible light they emit is redshifted, or stretched, transforming it into infrared (IR) light—thermal, or heat radiation—which is able to pass unimpeded through cosmic dust clouds. Telescopes that detect IR light are therefore capable of unveiling vastly greater views of our universe and even peering into its very beginnings.

NASA has been at the forefront of IR astronomy since 1974, when its Kuiper Airborne Observatory (KAO), an IR telescope mounted on a transport jet, made astonishing observations on a series of flights that lasted until 1995. (The Earth’s atmosphere absorbs much of the IR radiation from space, making high-altitude telescopes far more effective than ground-based versions. Space-based telescopes are more sensitive yet, since they can by cooled to very low temperatures, limiting interference from their own heat radiation.) The Agency has developed many IR observatories, from the 1979 construction of the Infrared Telescope Facility 14,000 feet up the slope of Mauna Kea in Hawaii to the 1983 launch of the Infrared Astronomical Satellite, the first IR satellite telescope, to the Cosmic Background Explorer (COBE), to the near-infrared camera multiobject spectrometer (NICMOS) operating onboard the Hubble Space Telescope since 1997. In 2003, the Spitzer Space Telescope combined sensitive modern infrared detectors with a cooled telescope to produce a remarkably powerful observatory. NASA plans to come full circle in its IR observatory efforts in 2010 with the first operational flight of KAO’s next-generation cousin, the Stratospheric Observatory for Infrared Astronomy (SOFIA), a large, airplane-mounted IR telescope. Four years later, the Agency expects to launch the infrared James Webb Space Telescope, which will allow us to see deeper into the universe than ever before.

Lake Shore Cryotronics Inc., of Westerville, Ohio, entered into 2002 Phase I and Phase II Small Business Innovation Research (SBIR) contracts with NASA’s Jet Propulsion Laboratory (JPL) and similar contracts in 2004 with Langley Research Center. The NASA centers wanted robust and high performance optical filters for IR astronomy to select the wavelengths of light that reach the detector. Since warm objects emit IR radiation, steps must be taken to reduce the amount of local thermal noise that interferes with the desired signal, typically by cooling the detector and its filters to a near-absolute-zero temperature. Existing IR filters, composed of multiple layers of different materials with different mechanical properties, tend to delaminate (separate from one another) at such extreme temperatures. They are also extremely expensive and often comprised of mechanically and chemically fragile materials. Lake Shore, a leading supplier of cryogenic temperature sensors and instrumentation, magnetic test equipment, metrology systems, and probe stations for the characterization of magnetic and transport properties of material, was intrigued by the problem and used the SBIR funding to investigate porous silicon technology, and subsequently, metal-mesh technology, as possible elements of a new filter technology for the IR. The company invested significant internal funds in the project; Lake Shore prides itself in a research and development budget that is typically double the national average for instrumentation companies.

The effort resulted in a more affordable long wave pass IR filter composed of mesoporous silicon. The filter, composed of a lattice of electrochemically etched, porous layers of monocrystalline silicon, maintains its properties and does not delaminate at extreme temperatures. Its high transparency for the far IR range (most removed from visible light) also makes it more desirable than conventional filter technology, which cannot perform using the long wavelengths employed for deep space imaging. This research program also resulted in the development of metal-mesh constructed filters (also referred to as frequency selective surfaces) specifically for IR band pass filters.

“The SBIR funding jumpstarted this program internally for us,” says David Klein, Lake Shore’s lead on new business development programs. “As we confirmed interest from NASA and other aerospace organizations, it further justified our decision to pursue the technology’s development and push toward commercialization.”

Lake Shore’s main customers for its filter products are within the astronomy community, but there are other promising applications on the horizon. One such opportunity is in the burgeoning field of terahertz imaging. Terahertz radiation—the range of wavelengths between IR and microwaves—is blocked by water or metal but passes through a range of other materials, including wood, cardboard, clothing, ceramics, and plastic. This makes terahertz radiation a highly appealing option for everything from medical imaging to examining artwork. Because certain materials, like plastic explosives, have special spectral signatures when imaged with terahertz radiation, the potential is great for developing highly specific security measures using terahertz. Klein notes that Lake Shore’s filter technology could be useful for this developing field.

“Our partnership with NASA has provided us with cross-cutting technology that we can use for other applications in different markets,” says Klein. The company is also investigating ways of using its SBIR-developed macroporous silicon technology in the development of other types of optical and electronic devices. “We wouldn’t have this porous silicon technology if it wasn’t for the NASA SBIR program.”

“The relationship between NASA and the private sector results in a cross-pollination of ideas and technologies, some with readymade applications and customers,” says Klein. “The U.S. government’s multi agency SBIR and STTR programs and their focus on supporting the small, technically rich business community provides an incentive for companies like Lake Shore Cryotronics to further invest in these technologies and bring them to market.”

Abstract
Infrared (IR) light filters developed by Lake Shore Cryotronics Inc., of Westerville, Ohio-using SBIR funding from NASA's Jet Propulsion Laboratory and Langley Research Center-employ porous silicon and metal mesh technology to provide optical filtration even at the ultra-low temperatures required by many IR sensors. With applications in the astronomy community, Lake Shore's SBIR-developed filters are also promising tools for use in terahertz imaging, the next wave of technology for applications like medical imaging, the study of fragile artworks, and airport security. 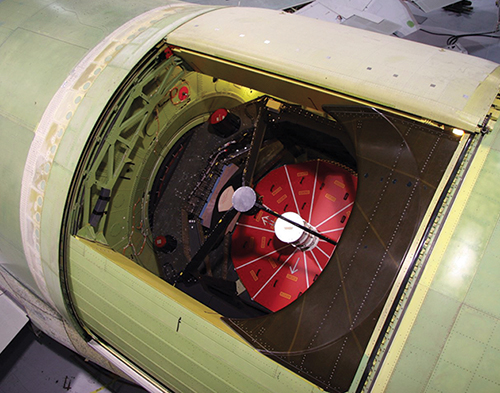 The infrared (IR) telescope of the Stratospheric Observatory for Infrared Astronomy (SOFIA) peers through the opening in the fuselage of its Boeing 747 mothership. 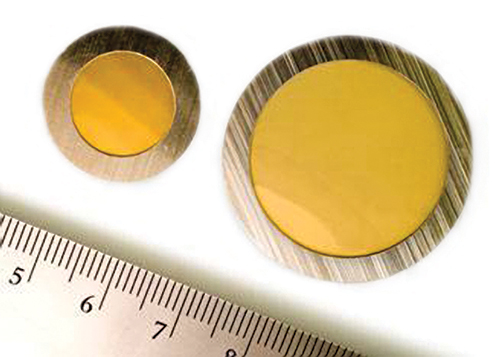 Lake Shore’s SBIR-developed IR filters are ideal for astronomy applications, as well as for technologies like terahertz imaging.