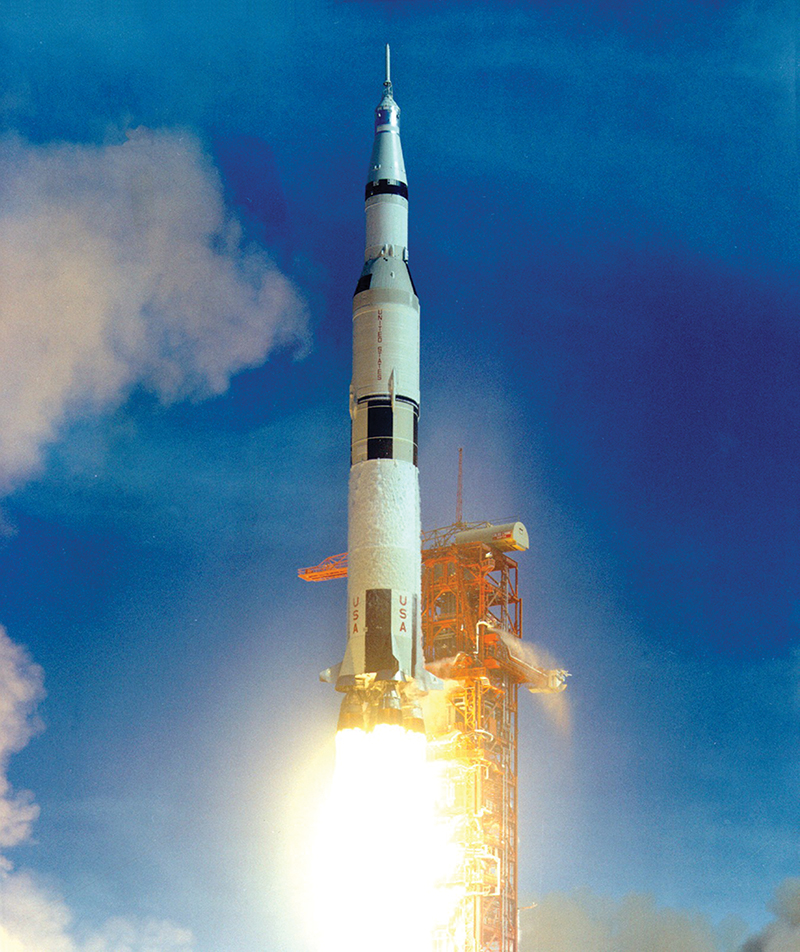 Rocket fuel needs to stay cool—super cool, in fact. The ability to store gas propellants like liquid hydrogen and oxygen at cryogenic temperatures (below -243 °F) is crucial for space missions in order to reduce their volumes and allow their storage in smaller (and therefore, less costly) tanks. The Agency has used these cryogenic fluids for vehicle propellants, reactants, and life support systems since 1962 with the Centaur upper stage rocket, which was powered with liquid oxygen and liquid hydrogen.

During proposed long-duration missions, super-cooled fluids will also be used in space power systems, spaceports, and lunar habitation systems. In the next generation of launch vehicles, gaseous propellants will be cooled to and stored for extended periods at even colder temperatures than currently employed via a process called densification. Densification sub-cools liquids to temperatures even closer to absolute zero (-459 °F), increasing the fluid’s density and shrinking its volume beyond common cryogenics. Sub-cooling cryogenic liquid hydrogen, for instance, from 20 K (-423 °F) to 15 K (-432.4 °F) reduces its mass by 10 percent. These densified liquid gasses can provide more cost savings from reduced payload volume.

In order to benefit from this cost savings, the Agency is working with private industry to prevent evaporation, leakage, and other inadvertent loss of liquids and gasses in payloads—requiring new cryogenic systems to prevent 98 percent (or more) of boil-off loss. Boil-off occurs when cryogenic or densified liquids evaporate, and is a concern during launch pad holds. Accurate sensing of propellants aboard space vehicles is also critical for proper engine shutdown and re-ignition after launch, and zero boil-off fuel systems are also in development for the Altair lunar lander.

One company, in partnership with NASA, has developed a liquid-sensing system that monitors cryogens and densified propellants. Fremont, Ohio’s Sierra Lobo Inc. (SLI) specializes in cryogenics and propulsion, and, in particular, produces propellant storage systems. The Hispanic-American-owned company that began with only 9 employees in 1993 now has an ISO 9001:2008 registration and currently employs over 370 people in its Ohio, Florida, Texas, Alabama, Virginia, and California facilities.

In 2006, SLI developed the Cryo-Tracker Mass Gauging System (Cryo-Tracker MGS) with funding from a Phase III Small Business Innovation Research (SBIR) contract from Kennedy Space Center, after receiving Phase I and Phase II funding from the U.S. Department of Defense. The Cryo-Tracker (CT) probe—the key component of the Cryo-Tracker MGS—works in conjunction with the system’s other two components: electronics that provide power and signal management for each sensing element, and software that displays data received from the probe. Since winning the initial SBIR contract, SLI has successfully tested Cryo-Tracker MGS on parabolic flights, which simulate the reduced gravity of space flight without the high costs. On these flights, SLI researchers validated wicking technology used in the system’s sensors by capturing numerous images of the system’s CT probe operating in water during 90 reduced-gravity parabolas lasting 25 seconds each. Sierra Lobo also successfully tested a 33-foot CT probe and the Cryo-Tracker MGS in a simulation of typical pre-launch and flight operations in a large-scale expendable launch vehicle liquid oxygen tank.

SLI has also received funding from NASA’s Innovative Partnerships Program Seed Fund in order to advance its system’s flight readiness for use on NASA and commercial launch vehicles. The NASA Launch Services Program, which certifies launch vehicles and manages payloads for the Agency, rated the Cryo-Tracker MGS at technology readiness level (TRL) 6, which indicates successful testing of a prototype in a relevant environment. The next level, TRL 7, requires successful operation in space. Cryo-Tracker MGS has been successfully tested with the liquid forms of nitrogen, oxygen, methane, and hydrogen, and the system proved robust in extensive vibration testing.

SLI is marketing the Cryo-Tracker MGS as a commercial product to testing facilities that use and store cryogens. Various industries routinely use cryogenic Dewar flasks (vacuum flasks) to store or transport super-cooled liquids, including the medical industry, metals processing, and semiconductor manufacturing. The Cryo-Tracker MGS is used in these industries to monitor mass, liquid levels, temperature, and pressure for stored liquid helium, hydrogen, nitrogen, or oxygen.

The Cryo-Tracker MGS is a three-part system that integrates the use of software, electronics, and the “R&D 100” award-winning CT probe. The probe offers increased reliability and adaptability over other cryogenic probes, according to Mark Haberbusch, director of research and technology at SLI. The patented probe has low mass for quick thermal response and flexible, one-piece construction, which reduces potential problems from vibration or breakage. It can also be adapted to different applications that may have size restrictions; Haberbusch explains that the CT probe can be manufactured to virtually any length and width, and has a nominal thickness of 0.030 inches (0.76 millimeters). Flexible material allows the CT probe to be installed along non-uniform tank walls, allowing it to gauge mass, tank pressure, liquid temperature profiles, and liquid levels in tight spaces.

In addition, the probe offers a flexible design configuration; each of the probe’s silicon diode sensors can be independently operated to detect liquid level or sense temperatures ranging from 1.4 K (-457 °F) to 325 K (125 °F) in the liquid as well as the unfilled container space (called ullage). Each diode’s sensing mode can then be toggled on the fly or by a preprogrammed logic of operations. A 1-millimeter-thick layer of polyimide insulates the diodes inside the probe from the fluids, enabling the probe to respond accurately to temperature and liquid-level changes in less than 1 second. The sensing elements can detect the difference between liquid and vapor (even when they are at the same temperature) through the difference in voltage output. This quick response adds a level of safety to cryogenic operations and storage by providing the ability to detect dangerous heat levels inside a tank that could lead to rapid over-pressurization.

The third component in the system, the Cryo-Tracker MGS software, determines the mass of fluid in a tank by monitoring liquid temperature, level, and ullage pressure. The software calculates mass and mass uncertainty, identifying the components needing the most monitoring. The software can monitor liquid mass for a variety of fluids in different types of Dewar flasks or tanks. In addition, the software uses computational fluid dynamics to determine the optimum number of sensors and their ideal locations for mass measurements.

Although SLI is currently marketing the Cryo-Tracker MGS primarily to customers interested in medical or industrial storage, it may only be a few years before this “super cool” gauging system appears in consumer products. SLI soon expects that manufacturers will begin using SLI’s Cryo-Tracker MGS to monitor tanks for gas grills and no-vent fuel tanks in liquid hydrogen-powered automobiles.

Cryo-Tracker® is a registered trademark of Sierra Lobo Inc.

Abstract
With SBIR awards from Kennedy Space Center, Sierra Lobo Inc. (SLI), based in Fremont, Ohio, developed the Cryo-Tracker Mass Gauging System (Cryo-Tracker MGS). The Cryo-Tracker MGS is a three-part system that integrates the use of software, electronics, and the R&D 100" award-winning Cryo-Tracker probe. SLI is marketing the Cryo-Tracker MGS to companies that use and store cryogens, including medical organizations, metals processors, and semiconductor manufacturers, which use the Cryo-Tracker MGS to monitor mass, liquid levels, temperature, and pressure for stored liquid helium, hydrogen, nitrogen, or oxygen. SLI began with only nine employees in 1993, and now has an ISO 9001:2008 registration and over 370 employees. 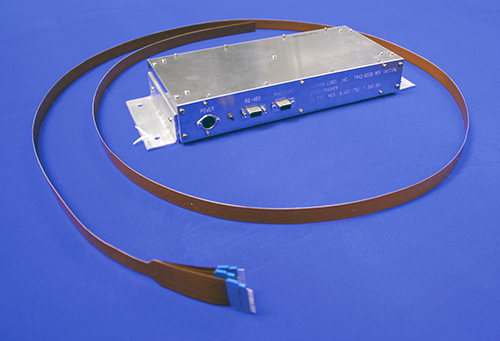 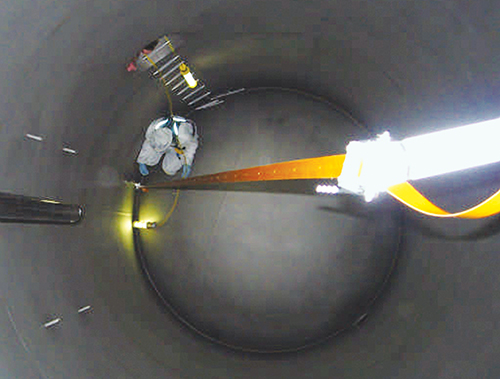 The Cryo-Tracker probe descends into a large tank where a worker checks conditions.

The Saturn V was a liquid-fueled expendable rocket used for Apollo and Skylab missions. Apollo 15, shown here, used over three-quarters of a million gallons of liquid oxygen and liquid hydrogen.