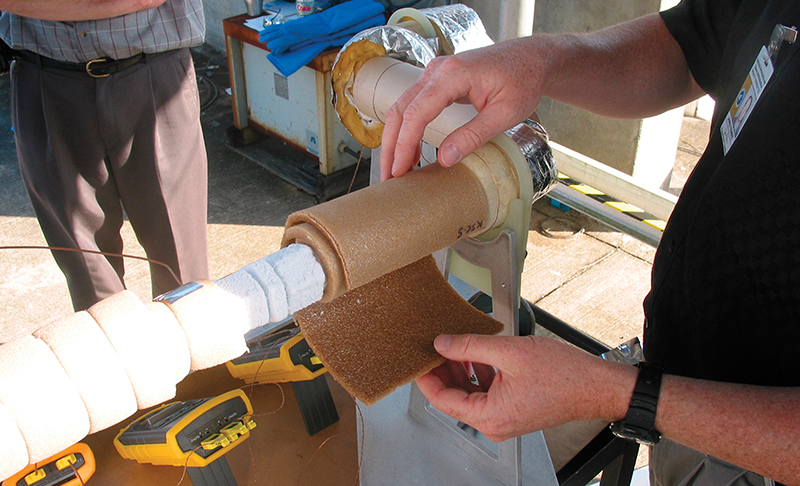 At Langley Research Center, Erik Weiser and his colleagues in the Advanced Materials and Processing Branch were working with a new substance for fabricating composites for use in supersonic aircraft. The team, however, was experiencing some frustration. Every time they tried to create a solid composite from the polyimide (an advanced polymer) material, it bubbled and foamed.

It seemed like the team had reached a dead end in their research—until they had another idea.

“We said, ‘This isn’t going to work for composites, but maybe we could make a foam out of it,’” Weiser says. “That was kind of our eureka moment, to see if we could go in a whole other direction. And it worked.”

Weiser and his colleagues invented a new kind of polyimide foam insulation they named TEEK. The innovation displayed a host of advantages over existing insulation options. Compared to other commercial foams, Weiser explains, polyimide foams perform well across a broad range of temperatures, noting that the NASA TEEK foams provide effective structural insulation up to 600 °F and down to cryogenic temperatures. The foam does not burn or off-gas toxic fumes, and even at -423 °F—the temperature of liquid hydrogen—the material stays flexible. The inventors could produce the TEEK foam at a range of densities, from 0.5 pounds per cubic foot up to 20 pounds per cubic foot, making the foam ideal for a range of applications, including as insulation for reusable launch vehicles and for cryogenic tanks and lines. They also developed a unique, friable balloon format for manufacturing the foam, producing it as hollow microspheres that allowed the foam to be molded and then cured into any desired shape—perfect for insulating pipes of different sizes and configurations.

In 2002, NASA licensed the TEEK family of foams to GFT LLC, based in Pennville, Indiana. GFT helped Langley manufacture samples of the foam for potential space applications, such as for insulating the external tank of the space shuttle. The company also optimized the technology to create the first highly flexible foam from polyimide microspheres, allowing for the production of intricate pipe covers of different diameters and wall thicknesses. Kennedy Space Center also researched potential shuttle and cryogenic test equipment applications of the GFT-manufactured foams.

GFT now offers the NASA-derived polyimide foam technologies as its PerForma-H and VersaFlex product lines. The company produces the foams in varying densities and formats, from sheets to foam-filled honeycombs and panels to hollow microspheres. GFT’s VersaFlex foams provide the added capability of extreme physical flexibility over a 1,000-degree temperature range (-423 °F to more than 600 °F). Customers are taking notice of the foam’s special characteristics, says GFT CEO Phil Griffith, who admits to being “enamored” with the material himself.

“Not only is it an excellent thermal insulator, but it’s also nonflammable and nontoxic in a fire,” he says. “There are a lot of insulating materials out there, but of those that are both fireproof and nontoxic, there are only a few. You find even less at the density of these materials that display outstanding mechanical properties. In fact, you find only PerForma-H and VersaFlex.”

The performance-to-weight ratio of the GFT foams, Griffith says, is better than any available alternatives, providing substantial savings for customers: “You can use less of the polyimide foam to get the same insulating properties as traditional materials, and it weighs about one-seventh as much as calcium silicate and is on par with fiberglass.” Griffith notes that one of GFT’s large marine customers has realized a 90-percent reduction in labor costs from the adoption of PerForma-H as piping insulation, as documented during the customer’s shipboard installations on active duty vessels. The reduction comes as a result of lowered installation and maintenance costs, reusability, and an increased life cycle due to the foam’s high performance in heavy traffic areas and harsh environments.

Griffith also points out that the material is environmentally friendly, manufactured without any poisonous halogenated substances and using solvents that are completely recoverable. Manufacturing the NASA-developed foams is essentially “a wasteless process,” he says.

Providing pipe insulation that is easily installed on marine vessels is currently the main use for GFT’s foams. The small company recently entered into product deals that Griffith says will keep GFT manufacturing for the next 10 to 15 years—a major accomplishment considering the single significant disadvantage of the polyimide foams is that they are presently somewhat expensive to manufacture.

“The foams have been expensive to make for a variety of reasons, one being the limited availability of certain components,” Griffith explains. “We’ve addressed that supply issue to adequately support a commercial ramp.”

The technology’s NASA origin lends immediate credibility to GFT’s products and opens doors for investment, Griffith says. “You can’t get the technology NASA offers anywhere else. NASA technology provides a number of benefits that small businesses should seriously consider.”

Weiser, in the meantime, is working on acoustic insulation applications for polyimide foams, a potentially safer replacement for the more flammable fiberglass insulation used to dampen noise in commercial aircraft. He also notes interest in the technology for safe, ecologically sound building insulation. “If you have a fire, this foam isn’t going to burn or produce smoke,” he says, a boon for buildings from suburban homes to downtown high rises.

Industry applications outside of NASA are something that Weiser always keeps in mind. “We want to meet NASA’s goals first,” he says, “but the value of the technology will go up for NASA if industry can use it for other purposes.”

PerForma-H® and VersaFlex® are registered trademarks of GFT LLC 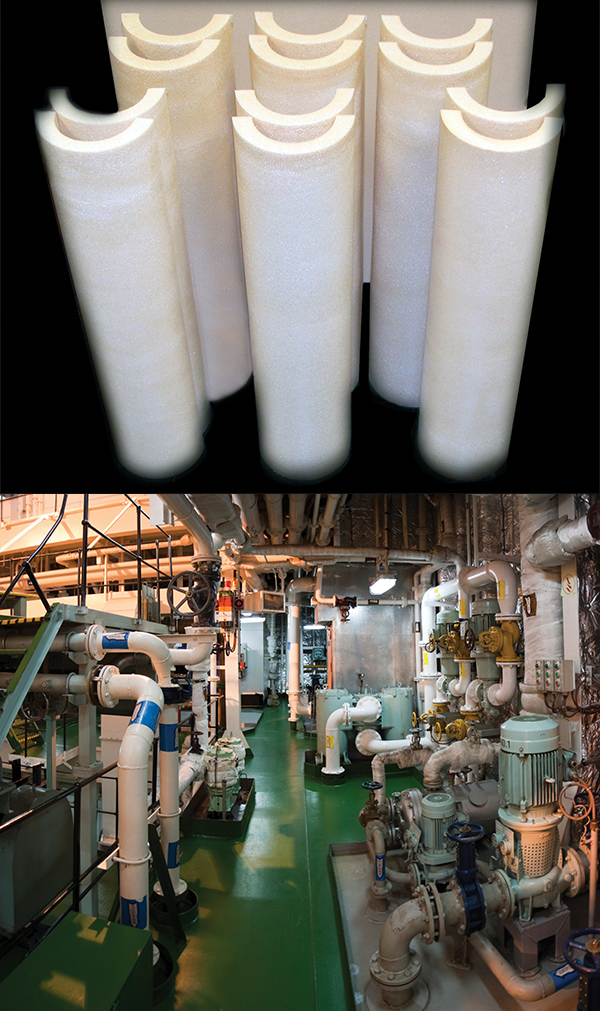 GFT’s NASA-derived foams (seen as preformed clamshells in the top image) find significant use in engine rooms and other areas of marine vessels that require highly durable pipe insulation.

GFT LLC’s highly flexible polyimide foam—seen here during testing at Kennedy Space Center—provides an ideal insulation for pipes in cryogenic and other industrial and marine applications. 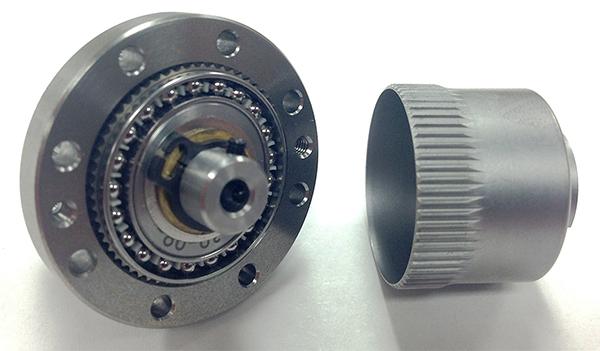