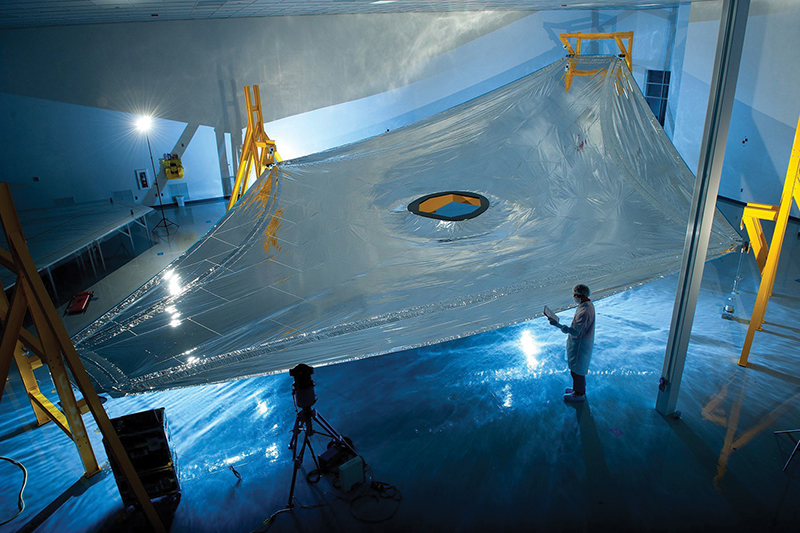 As a unique substance known for its heat- and chemical-resistant properties, present-day polyimides are in everything from laptops to kitchen toasters. For NASA, polyimides are useful in space because they can withstand extreme temperatures and radiation.

After working with almost 100 different polyimide structures, St. Clair noticed that a few of the resulting films were nearly colorless. This characteristic was only mildly interesting to Bell, but St. Clair thought it could be extremely beneficial for NASA. In space, color causes heat absorption, which can destroy structures and electronics.

In the late 1990s, SRS exclusively licensed the polyimides from Langley. According to Garrett Poe, program director at ManTech International Corporation, the company soon learned how to make CP1 and CP2 more effectively. “We’ve made several manufacturing improvements with regard to batch size, batch yield, reproducibility, and molecular weight,” he says.

In 2007, ManTech International acquired SRS Technologies, which became ManTech SRS Technologies Incorporated. A couple of years later, ManTech separated the group and renamed it NeXolve Corporation, which is based in Huntsville, Alabama.

NeXolve vice president, Jim Moore, explains that the company was working on solar thermal applications at the time when it licensed the technology, and needed a thin film capable of surviving the extreme conditions of space. “The polyimide structure was intended to be folded into a small package, deployed in space to create a large mirror, and then reflect the sun’s energy down to the absorber so it could be used as propellant,” he says. “Using CP1, we could have a mirror that was made out of polyimides.”

Today, NeXolve is a leading provider of polyimide thin film products not only to NASA, but to commercial customers including Boeing, Lockheed Martin, and Northrop Grumman.

One of NeXolve’s larger NASA projects is the James Webb Space Telescope. The company is providing the five-layer sunshields that will expand to nearly the size of a tennis court when in space.

“We’ve worked with NASA on solar thermal propulsion, inflatable concentrators, and solar sails,” says Garrett. “Most polymer materials start decomposing above 200 or 250 °C. We test our materials to 300 °C. If it withstands that, we have confidence it can withstand temperatures it will see on orbit,” says Poe.

NeXolve is also working with government and commercial entities that are developing applications that require lightweight, thin film optics for telescopes. “We use LaRC-CP1 to make transmissive membrane optics or reflective membrane optics,” says Poe. “We combine it with another technology we have to manufacture membrane mirrors. We can make the same surface as a glass mirror, but using a thin plastic film that is very light.”

The company also produces a CP1-coated copper foil for use as in thermal control. “In spacecraft insulation, it’s a multilayer insulation material,” describes Poe. “The blanket is comprised of several layers of films, some of which may be made with CP1 with aluminum coating, for example.”

Over the years, NeXolve has demonstrated CP1 to have stable physical and electrical properties over a range of temperatures and environments. Because it has significantly lower moisture uptake than traditional polyimides, the substance is useful on flexible printed circuit boards for electronics. “The more electronics there are in an area, the more things heat and expand and contract. The more they expand and contract, the more they are subject to moisture expansion, so if you have a material that doesn’t absorb much moisture, like ours, it is beneficial,” says Poe.

The company also supplies its spinoff technology to a leading provider of test solutions for coating electronic test hardware, and is in discussions with a supplier of disk drive components. “We have worked to develop materials to incorporate into suspension assemblies for hard disk drives,” says Moore.

After 40 years of innovation, this one NASA technology not only provides benefits on Earth but continues to influence the future of space exploration. The company recently proposed to use LaRC-CP1 as part of a special kind of photovoltaic technology which could enable lightweight cells for space-based solar power.

Abstract
While Anne St. Clair worked on high performance polyimides at Langley Research Center, she noticed that some of the films were nearly colorless. The polyimides became known as LaRC-CP1 and LaRC-CP2, and were licensed by NeXolve Corporation, based in Huntsville, Alabama. Today, NeXolve provides polyimide film products to commercial customers for spacecraft, telescopes, and circuit boards. 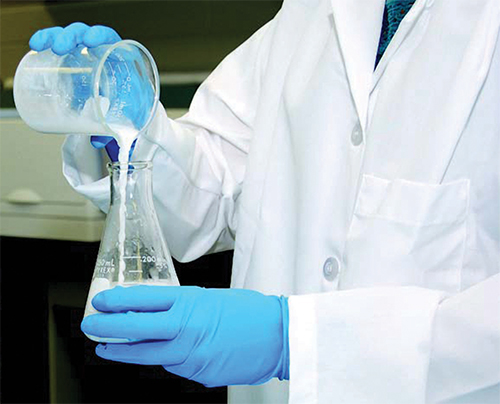 NASA researchers discovered unique heat-resistant substances that were nearly colorless when made into thin films. Proven to be stable in space environments, a private company licensed the NASA technology. Image courtesy of NeXolve Corporation