When engineers explore designs for safer, more fuel efficient, or faster aircraft, they encounter a common problem: they never know exactly what will happen until the vehicle gets off the ground.

“You will never get the complete answer until you build the airplane and fly it,” says Colin Johnson of Desktop Aeronautics. “There are multiple levels of simulation you can do to approximate the vehicle’s performance, however.”

When designing a new air vehicle, computational fluid dynamics, or CFD, comes in very handy for engineers. CFD can predict the flow of fluids and gasses around an object—such as over an aircraft’s wing—by running complex calculations of the fluid physics. This information is helpful in assessing the aircraft’s aerodynamic performance and handling characteristics.

In 2001, after several years of development, NASA released a new approach to CFD called Cart3D. The tool provides designers with an automated, highly accurate computer simulation suite to streamline the conceptual analysis of aerospace vehicles. Specifically, it allows users to perform automated CFD analysis on complex vehicle designs. In 2002, the innovation won NASA’s Software of the Year award.

Michael Aftosmis, one of the developers of Cart3D and a fluid mechanics engineer at Ames Research Center, says the main purpose of the program was to remove the mesh generation bottleneck from CFD. A major benefit of Cart3D is that the mesh, or the grid for analyzing designs, is produced automatically. Traditionally, the mesh has been generated by hand, and requires months or years to produce for complex vehicle configurations. Cart3D’s automated volume mesh generation enables even the most complex geometries to be modeled hundreds of times faster, usually within seconds. “It allows a novice user to get the same quality results as an expert,” says Aftosmis.

Now, a decade later, NASA continues to enhance Cart3D to meet users’ needs for speed, power, and flexibility. Cart3D provides the best of both worlds—the payoff of using a complex, high-fidelity simulation with the ease of use and speed of a much simpler, lower-fidelity simulation method. Aftosmis explains how instead of simulating just one case, Cart3D’s ease of use and automation allows a user to efficiently simulate many cases to understand how a vehicle behaves for a range of conditions. “Cart3D is the first tool that was able to do that successfully,” he says.

To enable more use of Cart3D for private and commercial aviation entities, the Small Business Innovation Research (SBIR) program at Langley Research Center provided funds to Desktop Aeronautics, based in Palo Alto, California, to build a plug-in to Cart3D that increases the code’s accuracy under particular flow conditions. Aftosmis says Desktop Aeronautics delivered valuable results and made Cart3D more applicable for general use. “Now they are bringing the product to market. This is something we never would have had the time to do at NASA. That’s the way the SBIR process is supposed to work.”

In 2010, Desktop Aeronautics acquired a license from Ames to sell Cart3D. The company further enhanced the software by making it cross-platform, incorporated a graphical user interface, and added specialized features to enable extra computation for the analysis of airplanes with engines and exhaust. “I think it’s going to be game-changing for CFD,” says Aftosmis. “Cart3D is the only commercial simulation tool that can guarantee the accuracy of every solution the user does.”

Today, Desktop Aeronautics employs Cart3D in its consulting services and licenses the spinoff product to clients for in-house use. The company provides commercial licenses and academic licenses for research and development projects.

The software package allows users to perform automated CFD analysis on complex designs and, according to the company, enables geometry acquisition and mesh generation to be performed within a few minutes on most desktop computers.

Simulations generated by Cart3D are assisting organizations in the design of subsonic aircraft, space plane, spacecraft, and high speed commercial jets. Customers are able to simulate the efficiency of designs through performance metrics such as lift-to-drag ratio.

“It will assemble a spectrum of solutions for many different cases, and from that spectrum, the cases that perform best give insight into how to improve one’s design,” says Johnson. “Cart3D’s preeminent benefit is that it’s automated and can handle complex geometry. It’s blazing fast. You push a button, and it takes care of the volume meshing and flow measurement.”

Without building an aircraft, engineers can never be completely certain which design concept will perform best in flight. However, they now have a tool to make the most informed prediction possible. 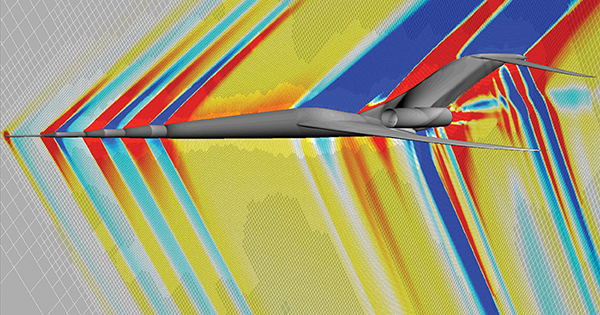