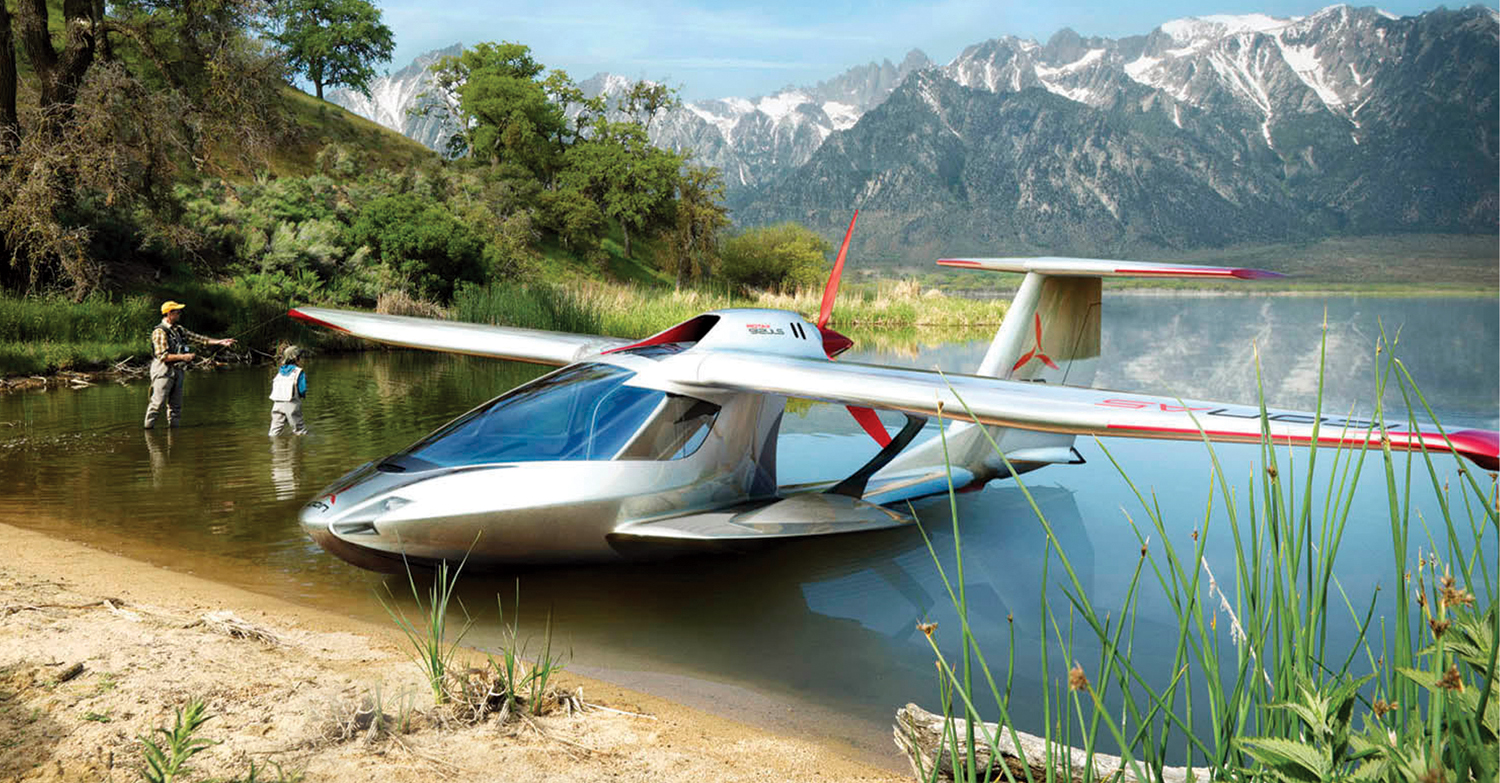 James M. Patton Jr. completed a whopping 8,000 spin turns throughout his career at NASA. As a research pilot at Langley Research Center, Patton and his team—which consisted of engineers Paul Stough and Dan DiCarlo along with test pilot Phil Brown—were bent on understanding and preventing a dangerous condition called “spin.”

Spin, which is caused by stall, or a reduction in lift during flight, sends an airplane spiraling toward the ground. While pilots are taught how to recover from a spin, even very experienced pilots can struggle with the task when they find themselves in a spin. According to the Aircraft Owners and Pilots Association, 28 percent of all fatal accidents in general aviation involve the stall-spin scenario.

To conduct research on spins, the Langley team utilized four different airplanes with four different wing shapes: a Grumman American AA1 Yankee, a Cessna 172, a Beechcraft C-23 Sundowner, and a Piper VA-2. When flying the aircraft, the pilots deliberately caused spins to occur. In case of an emergency, each plane had a spin recovery parachute attached to its rear to deploy and arrest the plane’s descent.

At the time of their research—in the 1970s and ‘80s—the percentage of fatalities due to stall-spin was higher than it is today. Very little was known or understood about designing general aviation aircraft to resist spins, but the Langley crew became experts on the subject.

In 1973, the group started NASA’s General Aviation Spin Program to devise the first-of-their-kind guidelines for designing more spin-resistant aircraft. Over the years, the program produced more than 100 technical reports and generated the knowledge and techniques that now enable safer aircraft designs. Thanks to NASA’s contributions, the Federal Aviation Administration (FAA) introduced the Part 23 spin-resistance standard in 1991 to assist engineers in evaluating an aircraft’s stall and spin characteristics.

Patton has received numerous awards for his NASA work, and in 2009 he and Phil Brown were inducted into the Virginia Aviation Hall of Fame for their extensive contributions to improving aviation safety and advancing aeronautics research. Even though Patton retired from NASA in 1987, his team’s daredevil work continues to inspire aircraft designers and pilots seeking new heights today.

While at Stanford Business School, Kirk Hawkins, a former US Air Force F-16 pilot, became keenly interested in a new category of aircraft designated by the FAA as Light Sport Aircraft (LSA). In 2005 the FAA established LSA to include simple-to-operate and easy-to-fly aircraft that could be flown using a Sport Pilot license—also a new category. The LSA category limits Sport Pilots to fly in lower altitudes, in uncongested airspace, during daylight hours, and in good weather. Certification for the license focuses on the fundamentals of flying and reduces the time and cost of a traditional private pilot license by about 50 percent.

At first, Hawkins and his carefully chosen team of designers and engineers aimed to design a vehicle that was spin-recoverable, or more easily recovered from a spin. In the middle of the process, however, they reconsidered. “We wanted to design a plane that was spin-resistant,” says Hawkins, founder and CEO of ICON. “We knew it would set us back about a year and a few million bucks, but we knew it was the right thing to do.”

Turning to the FAA Part 23 standard, Hawkins and his team contacted people from the Langley team to learn more. Informed by NASA research, the ICON team found that in order to prevent a spin, they needed to prevent a stall. They executed this by incorporating a wing cuff on the aircraft to separate the wing into two distinct parts: one that allowed a stall to begin and one that prevented it from continuing. This, in turn, prevented a spin.

To test its design, ICON engineers treated the Part 23 standard like a rigorous exam and subjected its new sport plane—deemed the A5—to several hundred test cases required by the standard. Eventually, the A5 met the complete set of criteria specified for Part 23 testing.

“If it wasn’t for the NASA work, there would be no FAA standard, and we wouldn’t have done this,” says Hawkins. “When we saw the results, it was pretty phenomenal. I think the safety advantage is a disruptive one, analogous to antilock brake systems in cars.”

Hawkins compares the spin-resistance of the A5 to antilock brakes in cars because they are designed to respond to maximum braking by the driver without losing control. This way, drivers can do what they are inclined to do—keep their foot on the brake—and the vehicle responds predictably. The spin-resistance characteristics of the A5 are similar.

“If you mis-fly and get into a spin, you panic,” explains Hawkins. “The first thing you do is pull the stick back. It’s like stomping the brake and saying, ‘Whoa! I don’t want to do this.’ The right answer is to relax back pressure on the stick, fly toward the ground, recover the wings, level them out, and then slowly reapply the pressure so you miss the ground. We wanted to make an airplane where, if you do pull the stick back, as is the pilot’s natural reaction, it doesn’t get worse. It gets better.”

Hawkins says the spin-resistance of the A5 will save lives. Before a spin even begins to occur, the A5 provides a warning that tells the pilot he or she is doing something wrong. This is especially beneficial in sport flying because flying typically occurs at low altitude, where a spin is most dangerous.

In addition to spin-resistance, the A5 also offers a complete airplane parachute, another NASA spinoff (“Rocket-Powered Parachutes Rescue Entire Planes,” Spinoff 2010), which can bring the plane gently to the ground should an emergency occur. “It provides confidence to the customer that safety is built in, though you likely will never have to use it,” says Hawkins. “Just like when you buy a car, you have an airbag—but you rarely have to use it.”

Alongside the safety elements, the A5 boasts a number of additional features based on the idea, “If you can drive, you can fly.” For example, ICON is collaborating with Lotus Engineering to incorporate premium lightweight automotive-quality components for the two-person cockpit. The interior instrument layout resembles a sports car. Plus, the key instruments are grouped in one cluster, and the safety controls are grouped in another easy-to-reach console. The A5 also has a wraparound window canopy with removable side windows for a clear view.

For convenience, the A5’s wings can fold back so the aircraft can fit on a custom towing trailer or in a residential garage. As an “amphibious aircraft,” the A5 can take off from and land on both water and ground, requiring only 750 feet of runway or water. It also has retractable landing gear.

Powered by a fuel-injected Rotax 912 iS engine, which reportedly delivers up to 70 percent better fuel efficiency than comparable engines, the A5 runs on both aviation fuel and automotive gasoline. The maximum speed is 120 miles per hour.

So far, the company has received more than 1,000 orders for the A5. The first one will be completed in the summer of 2014. In addition to individuals purchasing the spin-resistant aircraft for personal use, ICON has demand from businesses for multiple A5 aircraft, including flight schools, flying clubs, resorts, and adventure companies. In 2012 the A5 also showed up in an unlikely place: in a new Microsoft Flight PC game using the A5 as the default aircraft in its starter pack.

While NASA may have put a new spin on flight design several decades ago, ICON Aircraft is putting the spinoff technology into pilots’ hands for safer aircraft today. 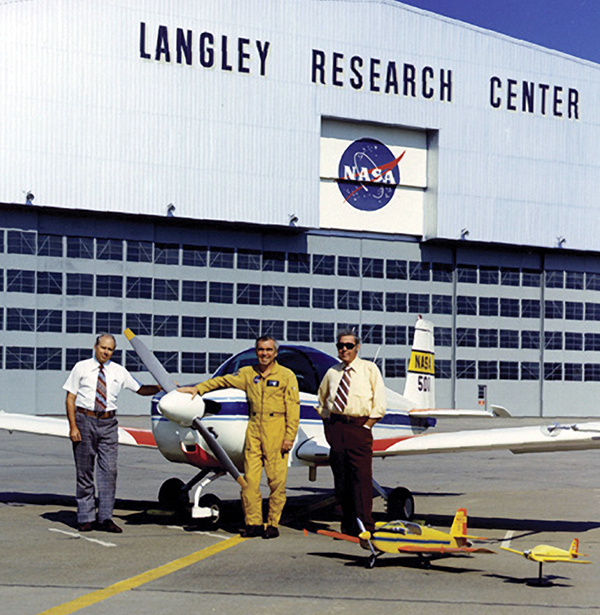 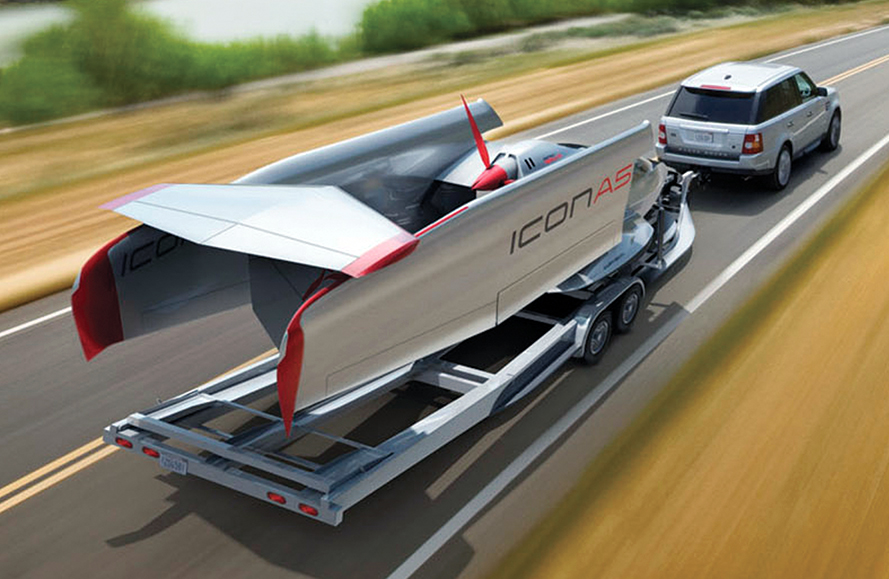 The wings of ICON Aircraft’s A5 fold back so it can fit on a custom towing trailer or in a residential garage. It runs on aviation or automotive gasoline and can fly up to 120 miles per hour. 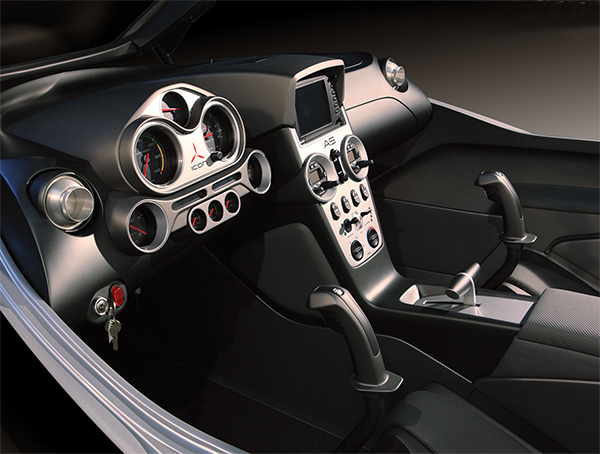 Cockpit of an ICON aircraft

As a Light Sport Aircraft, the A5 was made for consumer recreational flying. For safety, it incorporates spin-resistance—an advantage, according to its makers, that is similar to antilock brake systems in cars. For adventure, the A5 can take off from and land on both water and ground.