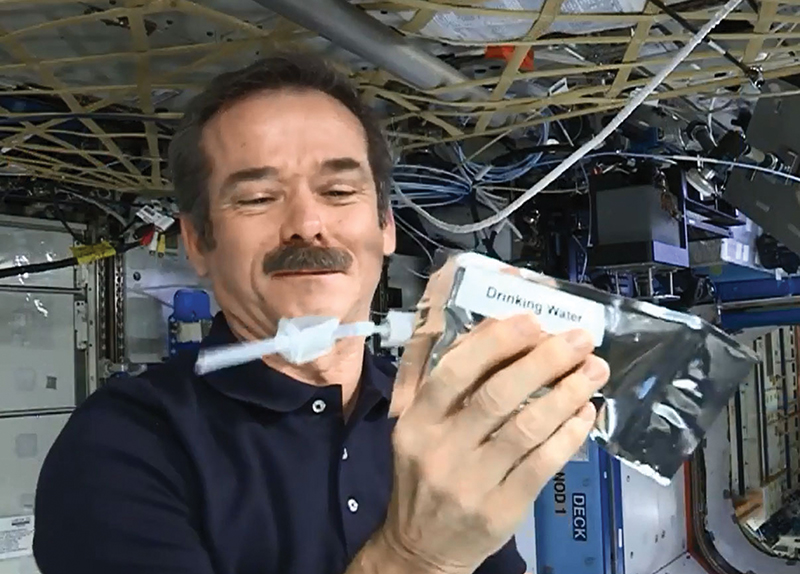 Half a century ago, a scientist at the Naval Ordnance Laboratory discovered that an alloy containing 60 percent nickel and 40 percent titanium could provide exceptional performance for rocket nose cones undergoing the rigors of atmospheric reentry. While the Navy experimented with this new material for a few years—in addition to rockets, it was also tested in mine detectors—it proved too difficult to work with to be of real practical value.

In the end, the Navy abandoned the project, but not before publishing its findings on the material, which was named 60 NiTiNOL; Ni and Ti after its atomic makeup and NOL after the lab where it was first developed. Though known to industry ever since, Nitinol 60 (as it is more commonly called) sat largely dormant for the next 50 years, inaccessible until someone could figure out an easier way to manufacture and manipulate it.

Without the persistence of one ball bearing engineer and the cooperation of a NASA technologist, the alloy’s potential may have gone undiscovered for another half century.

In 2000, an engineer at Abbott Ball Company named Glenn Glennon saw in Nitinol 60 a potential solution to a problem that has long hampered the ball bearing industry. Typically, he says, bearings are made from stainless steel because of its hardness. But that comes at a cost, as stainless bearings typically can’t handle much exposure to the elements before corroding. “We knew this industry standard could be replaced with something better if it was available,” says Glennon.

However, the West Hartford, Connecticut-based firm is a small company and didn’t have many resources to devote to research and development, so Glennon took on a lot of that work himself. In his search for partners with the ability to move the technology forward, he turned to NASA Glenn Research Center. The initial response wasn’t what he had hoped it would be.

“I was very lukewarm on the idea of doing testing for them, for a couple of reasons,” says Christopher DellaCorte, a senior technologist at Glenn. “For one, we always try to steer away from anything that would look like a product endorsement, and the easiest way to do that is simply not to do this kind of testing on request. But I was also skeptical of the claims they were making about the alloy as a bearing material, because it has a lot of titanium in it.”

Titanium, he explains, while admired in aerospace engineering for its strength and light weight, is also known across the industry for being extremely difficult to lubricate. Because it is highly reactive, oil and grease break down shortly after being applied, leading quickly to heavy wear and tear.

However, DellaCorte’s reluctance wore down as Glennon, who believed he had something special in this material, persisted. The company stressed that it was only looking for independent testing—testing that it couldn’t perform in-house due to a lack of the proper equipment—and that it wasn’t planning on advertising its NASA connection. DellaCorte relented, and the parties agreed that if Abbott Ball could supply a small number of parts, his team would run its standard bevy of tests on the mysterious alloy.

The first challenge to overcome was manufacturing those parts to high standards of quality. Up to that point, Abbott Ball had been using cast materials—created by melting down the metals and pouring them into molds— but this process proved too crude. Not only were they unable to make bearing balls that were smooth enough, but the titanium, once melted, had a tendency to absorb contaminants like carbon or oxygen that created flaws in the final product.

DellaCorte suggested that the company instead turn to powdered metallurgy, a process he was familiar with from his work in ceramics. In powdered metallurgy, particles of the material in powder form are combined and compacted in a container. The mixture is then heated to a temperature close to, but not reaching, the melting point of the materials. At that threshold, the atoms in the mixture begin bonding in a solid-state fashion, a process known as diffusion.

In addition to lowering the temperatures required to manufacture the final product, powdered metallurgy also avoids contamination that would otherwise weaken the alloy. Now with smooth, shiny bearings in hand, DellaCorte could finally run tests. The results came as a shock to the team. “We were very surprised,” he says. “It had all of the strength you’d expect from the materials involved and was corrosion-proof, but in terms of lubricant life and friction levels, Nitinol 60 performed just as well as the best bearing steels.”

Glennon’s efforts to revive Nitinol 60 were finally coming to fruition, and suddenly the sky was the limit. Abbott Ball and Glenn refined the powdered metallurgy process specifically for Nitinol 60, and now the partners co-own patents on that process.

Engineers typically have to make tradeoffs when choosing bearings for particular applications. As DellaCrote explains, if those qualities are imagined as a Venn diagram—with overlapping circles denoting whether a given material is hard, corrosion resistant, lightweight, nonmagnetic, or elastic—then most materials only combine a few qualities. Nitinol 60, on the other hand, stands in the center of the diagram where the circles all overlap. “It’s the only material that combines all of those properties in a single bearing,” he says.

Because it is relatively new and still expensive to produce—several times the cost of other standard bearings—Nitinol 60 is currently a niche market. But it has found traction among aerospace clients, who will gladly pay the extra cost in bearing materials to avoid the weight, expense, and complexity of workarounds that other bearings might require, such as additional spacecraft components or protective coatings.

Abbott Ball is also exploring other avenues for new products. Among them are kitchen knives, taking advantage of the material’s hardness and corrosion resistance. The US Navy has funded two Small Business Innovation Research (SBIR) contracts to explore modern applications in various defense components. And the company is also exploring Nitinol 60’s use in medical equipment such as scalpels: that the material can withstand extreme temperatures and is nonmagnetic makes it ideal for reusable, easy-to-sterilize tools that won’t unintentionally interfere with other equipment.

Engineers at Glenn have also continued testing and improving the material, which has led to a few more patents. For example, they recently discovered that adding third and fourth ingredients in small percentages makes Nitinol 60 easier to machine and process at lower temperatures, without compromising its desirable qualities. Glenn and Abbott Ball have also partnered to provide Nitinol 60 bearings for a wastewater processor scheduled to be installed on the International Space Station— exactly the kind of corrosive environment that has posed problems for traditional bearing materials.

Thanks in part to the partnership, Nitinol 60 likely has a bright future in space and on Earth. Glennon credits Abbott Ball owner Roger Bond and his son and company president Craig Bond for their support, financing research without any guarantee of a return on the investment. And DellaCorte wants to ensure no one forgets that it was Glennon’s advocacy that turned a 50-year-old curiosity into something poised for mainstream success.

“If it weren’t for his persistence, I don’t think the world would have given this material another thought,” he says. 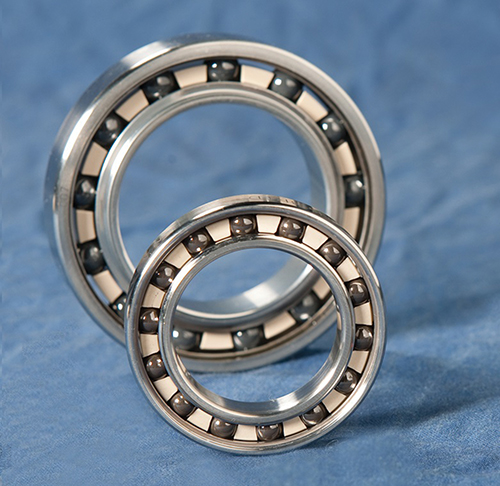 Titanium, which is a highly reactive metal, does not normally work in bearing applications that require lubrication. When combined in the right proportions with nickel, however, NASA discovered that it performs as well as the best bearing steels.

Titanium, which is a highly reactive metal, does not normally work in bearing applications that require lubrication. When combined in the right proportions with nickel, however, NASA discovered that it performs as well as the best bearing steels.