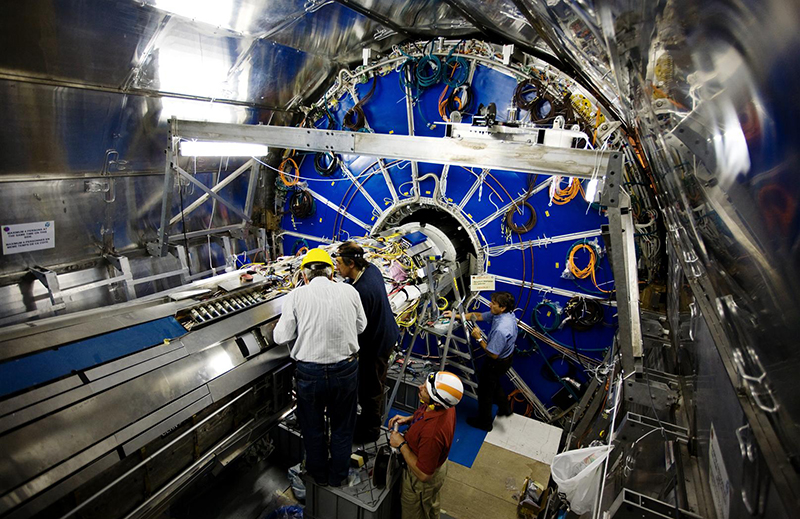 In spacecraft construction, even components like tape can require cutting-edge technology.

During the mid-1990s, engineers at the Jet Propulsion Laboratory (JPL) were tailoring an outfit for the Cassini space probe—which has now been exploring Saturn and its moons for more than 11 years—that would shield it from the extreme temperature fluctuations and other harsh conditions of interplanetary travel.

There was a lot at stake. A joint project of NASA, the European Space Agency, and the Italian Space Agency, the $1.4 billion probe remains the most complex, sophisticated unmanned spacecraft ever built, carrying 12 scientific instruments and six more aboard its Huygens lander.

“We had a need for a robust tape we could bind our blankets with, and there wasn’t a tape available with the various optical properties we needed,” recalls Mark Duran, thermal blanket engineer at JPL. Until then, the center had been using a glass cloth tape that outgassed traces of silicone, which could contaminate optical surfaces. The silicone could be baked out, but then it contaminated the vacuum bake-out chamber.

Duran’s team turned to Bristol, Pennsylvania-based Dunmore Corporation, a major supplier of specialized films for space applications since the 1980s. Based on NASA’s needs, the company came up with a line of specialized tapes, including the one used on Cassini, a laminate of carbon-filled Kapton polyimide backed by a tight-woven scrim. With this reinforcement, the engineers could attach the insulating blankets with lacing cord, allowing them to be taken on and off over the course of multiple tests. “We can use a single set of blankets for the entire lifecycle of the program,” Duran says.

The blankets JPL uses to keep spacecraft around room temperature in space—where they would otherwise fluctuate between about -150 °F and 480 °F—also incorporate Dunmore technology, as the company specializes in multilayered insulation. While early NASA missions used reflective foils for insulation, Dunmore helped to pioneer the process of vacuum-metalizing polyimide films for space insulation, combining thin films of substances like Mylar and Kapton with metals from aluminum to germanium and indium tin oxide, giving them specific thermal, optical, and other properties.

The results were ultra-light, reflective insulation films that could be applied in many more layers than metal foils without adding too much weight to the spacecraft.

“They have many different metals they’re able to apply to film, depending on what our specifications are,” Duran says, noting that different spacecraft encounter different conditions. A probe visiting Jupiter, for example, would require a conductive surface to ward off electrical jolts from the Jovian charged-particle belts.

While the company is far from the only provider of such materials for NASA missions, Duran says JPL ends up procuring about 75 percent of its thermal films, for example, from Dunmore. “Just about everything we’ve built over the last 20 years has had, in some form, a Dunmore product on it.”

Many of these were standard company products at the time, but others, like the tapes, began as collaborations. “They’re in tune with their customers’ needs and will produce products, working with us, that aren’t in their catalog,” Duran says.

Later, when JPL faced the tricky task of coating a Teflon blanket that would allow its CloudSat Earth-observing satellite to dump heat from high-powered electronics while warding off warmth from the sun, Duran and his team again turned to Dunmore. It was a challenge, as the material is most famous for allowing nothing to stick to it, but the company succeeded.

It was this sort of collaboration to meet NASA’s needs that led to many of the products the company sells for terrestrial applications, says Neil Gillespie, vice president of new business ventures for Dunmore. While the company was pioneering its line of multi-layered insulations, for example, NASA engineers asked for specific weights and optical properties, and the company figured out how to meet those specifications.

“We experimented with a lot of different material configurations and coatings to ensure we were developing products with optimal characteristics without adding too much weight,” Gillespie says. “It involved a great deal of trial and error and ultimately produced a highly efficient family of products.”

In the vacuum of space, the primary mode of heat transfer is radiation, so the thermal protection system must be highly reflective to manage dramatic temperature changes, allowing optimal performance of the spacecraft and its instruments, he explains. The company created light, feathery insulation consisting of many layers that reflect both the sun’s heat back into space and the interior warmth back into the spacecraft, maintaining a constant interior temperature.

In addition to radiation, terrestrial insulation systems also have to contend with convection and conduction. In a multi-layer system, reflective materials deflect heat just as they do in space, while the multiple layers of material trap air, which is a poor heat conductor and thus slows convective and conductive heat transfer. Weight being less of a concern, foils may be used in reflective insulation for a building, for example, but these materials can feed a fire if it becomes hot enough, presenting a hazard. Metalized polyester, on the other hand, melts away from a flame, Gillespie says. “That was a direct spinoff, from a technical standpoint, of the knowledge we brought from our NASA work.”

Another popular use for Dunmore’s insulations is in transportation of cryogenic materials—substances like hydrogen, oxygen, or natural gas, that are super-cooled into liquid form. Like a Thermos, the tanks that carry these substances employ a vacuum envelope that nearly prevents convective heat transfer, but, just as in space, radiant heat can still penetrate.

Enter 20–40 layers of lightweight, metalized, reflective polyester. Just as insulation in space needs to let in just enough of the sun’s heat to keep the spacecraft warm, the tanks must keep theircold enough to stay liquefied but warm enough that they can still be stirred. Liquid natural gas, for example, has to be stored around -260° F. Helium, with the lowest boiling point, is transported at about -450° F—close to absolute zero. The difference is in the number of layers of insulation.

The same technology applies to other cryogenic applications, such as particle accelerators and magnetic resonance imaging (MRI) machines, and the insulations Dunmore created for space applications can be found in these as well. In the case of a particle accelerator, Gillespie explains, when a conductive metal is cooled below a certain threshold, its electrons pair off, forming a lattice that allows electrons to pass through it without scattering, and therefore without resistance. It’s become superconductive.

In particle accelerators belonging to the European Organization for Nuclear Research (CERN), Oak Ridge National Laboratory in Tennessee, and others, conductive metals are cooled by liquid helium or nitrogen, surrounded by vacuum envelopes containing Dunmore’s insulations.

“It’s exactly what they use in space,” Gillespie says, adding that the same products are used in MRIs, which also use superconductive materials to generate a strong enough pulse to penetrate the body.

Dunmore has learned other lessons from its work with NASA that have now found commercial applications, such as how to make labels for circuit boards that can withstand the heat of soldering. Circuit boards also require the protection of thin, lightly metalized film to dissipate static electrical charges that might otherwise fry components. The company started making these electrostatic shields for Earth applications but expanded its offerings through work it did for satellites, which are especially susceptible to static electrical charges in the dry environment of space.

Electrostatic dissipation is an application that’s continued to grow in importance on Earth. “As things have gotten smaller, static electricity has gotten to be a bigger problem,” Gillespie says, explaining that a nano-circuit’s wires and parts are so tiny and fragile that any electrical jolt will fry them.

And the tapes Dunmore developed for use on spacecraft? Their high heat tolerance has made them suitable for consumer electronics, and they are also used as wire and cable insulation aboard aircraft due to their strength and effectiveness as an insulator.

Having developed so many aerospace products, the company naturally established a presence in the emerging field of commercial space, working with companies like SpaceX, Orbital Sciences, Virgin Galactic, Blue Origin, and Bigelow Aerospace. “We’re still very active in that market and delighted to be so,” Gillespie says. “It’s very exciting these days.”

Duran says Dunmore’s willingness to collaborate with clients like NASA to develop new products has made it the biggest player in its field. “They have a catalog that is humongous, and they offer just about every film known to man.”

Gillespie agrees. “We work with a lot of exotic materials, and we wouldn’t have known most of those without our experience working with NASA command.”

Abstract
Since the 1980s, Dunmore Corporation of Bristol, Pennsylvania, has worked with the Jet Propulsion Laboratory and other NASA centers to develop temperature-resistant products, helping the company establish a massive catalog. Many of its multilayer insulations were developed for NASA and are now used in building insulation, cryogenic material transport, MRI machines, and particle accelerators. Heat-resistant labels and electrostatic shields for circuit boards, as well as temperature-resistant tapes for electronics, have stemmed from products designed for spacecraft. 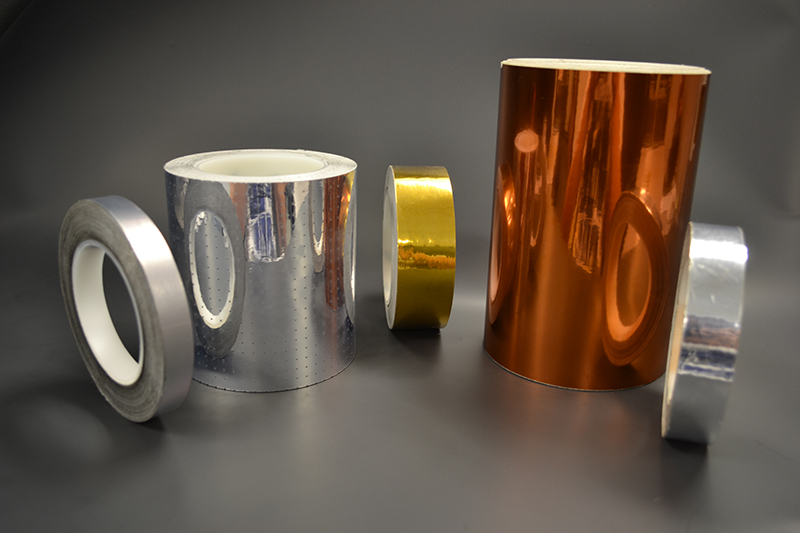 Dunmore has a long line of temperature-resistant tapes, including varieties for wire and cable wrap, for sealing the edges of the company’s multilayer insulation, and for creating nonstick surfaces. Several of these were originally created for NASA applications. 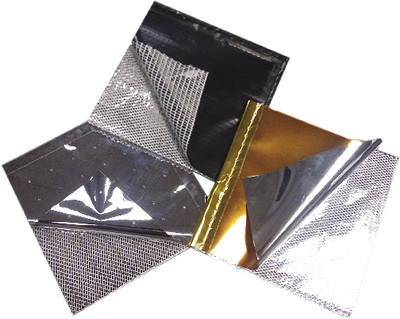 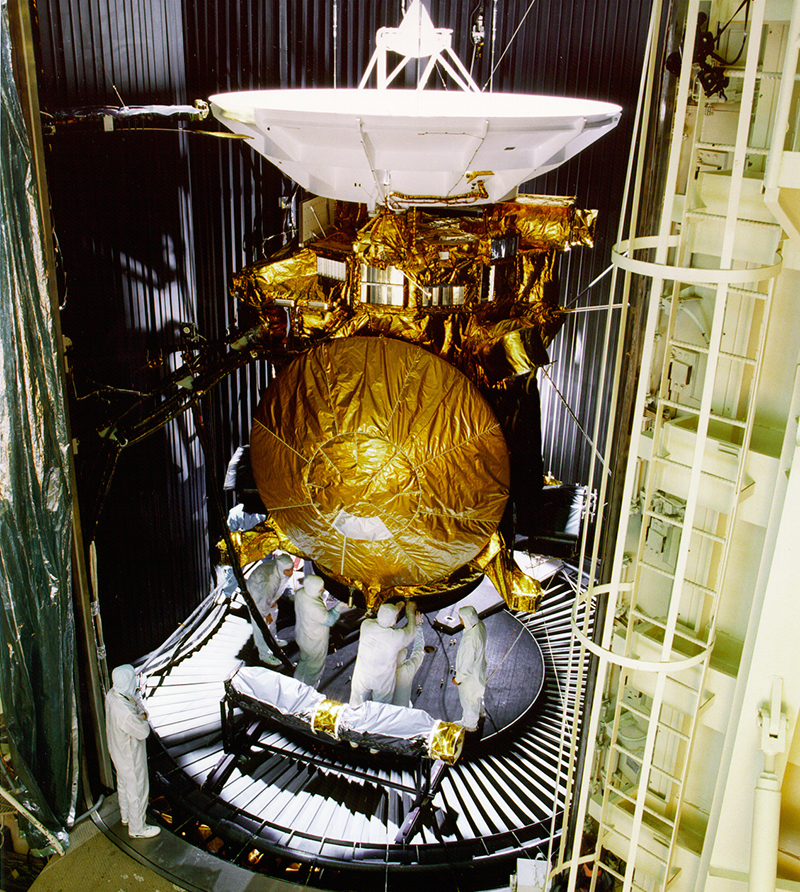 In the 1990s, Dunmore Corporation custom-made a carbon-filled Kapton polyimide tape for the Jet Propulsion Laboratory to reinforce the edges of insulating blankets on the Cassini space probe, allowing them to be attached with lacing cord. The company also pioneered the process of vacuum-metalizing polyimide films for space insulation, resulting in lightweight, multilayer insulations that have found various applications on Earth. 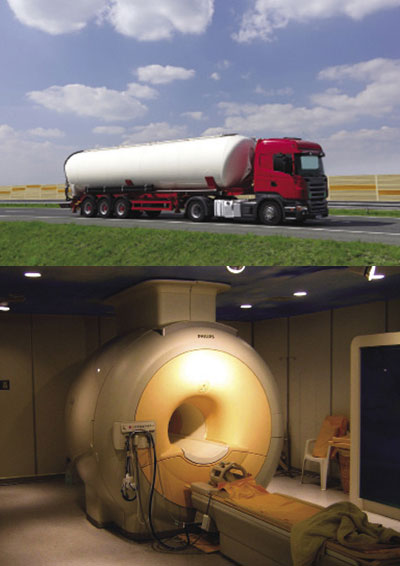 Dunmore’s use of thin, metalized films to create lightweight, multilayer insulation has found uses not just in protection against the temperature extremes of space but also for insulating liquefied gas tanks and superconductive elements of magnetic resonance imaging machines, among other Earth applications.

The same multilayer insulations that Dunmore pioneered for space applications are used in particle accelerators, such as the Large Hadron Collider at the European Organization for Nuclear Research, or CERN, pictured here. The insulators keep conductive metals cooled below a certain threshold, at which they become superconductive.