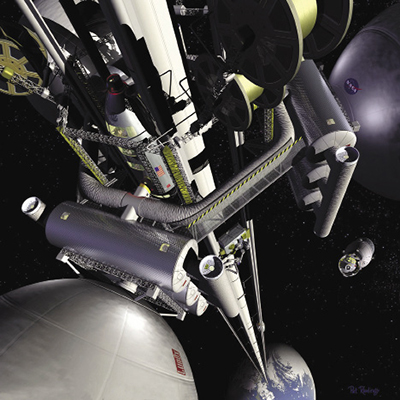 Science fiction writer Arthur C. Clarke, in his hugely successful 1979 work The Fountains of Paradise, crafted a story around the development of a technology that had been proposed since at least the late-1890s: a space elevator. Simple but provocative, its design calls for a cable to rise 24,000 miles from Earth’s equator to a satellite in geosynchronous orbit. Spacecraft and payloads would climb up the cable and launch into space, upending the costly, resource-intensive rocket launch method currently used.

Through the years, that concept has taken a leap from the pages of fiction to the realm of scientific inquiry, as governments and private industry have been working on cracking various logistical barriers to its realization. For its part, NASA’s Space Technology Mission Directorate is also helping to advance innovation in that and other visionary technologies through its Centennial Challenges Program. Started in 2005, the program offers cash prizes for inventors, including small businesses and student groups, to come up with innovative solutions to technical problems of interest to both the Agency and the Nation. Based on feedback from the public and from private industry, in its inaugural year the program initiated the Space Elevator Challenge.

One of the contests was to help overcome a key conundrum in the space elevator scheme—how to power the robot “climbers” that would be used to carry spacecraft and other payloads up the elevator and into orbit. Because of the distances involved, the robot would need to operate without being connected to electrical wires; batteries, while portable, lack adequate reserves of power. The only feasible alternative at the moment is to beam light onto photovoltaic arrays installed on the climbers, which would convert incoming photons into electricity. The “cordless extension cord,” as it’s called, would be useful for powering not only space elevators but also exploration vehicles such as rovers and other devices.

To advance the technology, the Spaceward Foundation arranged with NASA to run a sub-competition as a part of the Space Elevator Challenge, which was called the Power Beaming Challenge. The objective for each team was to utilize the photovoltaic-based approach to design a robot that could climb a cable suspended in mid-air for a certain distance and at a certain speed.

The Power Beaming Challenge was held in 2005, 2006, 2007, and 2009, and the requirements became more stringent as the years progressed. In 2005 and 2006, rules held that, to claim a cash prize, participating robots had to climb 50 meters of cable at a speed of 1 meter per second; in 2007 the required distance was increased to 100 meters; in 2009, competing robots had to climb 3,280 feet, or one kilometer, into the air at a minimum pace of at least two meters per second. (For the kilometer-long contest, organizers forsook the crane they had been using for a helicopter, which hoisted the ultra-long cable into mid-air for 45-minute intervals, the length of time each team had to accomplish the feat.)

Not a single team managed to win prize money in any year, that is, except for Seattle-based LaserMotive. Physicist and laser expert Jordin Kare and fellow scientist Tom Nugent decided to form the group, comprising themselves and other industry experts, in preparation for the 2007 competition after watching the previous year’s contest in Las Cruces, New Mexico. “Most of the teams were using spotlights to direct light onto their climbers,” Nugent says. “We thought we could do better.”

By doing better, Nugent meant employing diode lasers, which provide more light intensity than spotlights. By the mid-2000s these semiconductor lasers had become efficient enough to make the leap from industrial to commercial applications, such as laser hair removal, materials processing, and telecommunications. Their expanded use helped reduce the costs of production, making it possible for a startup like LaserMotive to incorporate the technology in its scheme.

In addition to ordering a customized laser diode that combined multiple diodes into a compact but high-intensity light source, the team worked diligently in designing and building the robot, which was a huge undertaking by itself, says Nugent. Among their major innovations was optimizing its photovoltaic arrays so that they maintained efficiency even when the beam was not uniform or not properly centered on them. Afterward, they tested the entire setup by powering the climber repeatedly on a treadmill, which helped them “to do a lot of iterations, which prepared us better for the actual event,” he adds.

In the 2007 competition, LaserMotive took a gamble and tweaked some of the system mechanics in order to increase the climber’s efficiency, but it had the effect of rendering it inoperable. In 2009 the team didn’t repeat its mistake. The crew simulated the climb multiple times in advance and, in the process, improved their plan of attack while also decreasing the likelihood of failure. The critical task of manually steering the laser was left to the youngest teammate, a former Marine who, as Nugent notes, happened to be an avid video gamer.

Their attention to detail paid off. LaserMotive became the only team whose climber ascended the cable the full kilometer, which was done on four separate occasions, and it did so at speeds above the minimum two meters per second (its fastest was 3.97 meters per second), netting the crew $900,000 as a result.

Using the expertise and money gained from their involvement in the NASA-funded Power Beaming Challenge, in 2012 LaserMotive commercialized its Power over Fiber (PoF) technology. The system can provide electricity to a variety of devices in a method similar to how the company powered its robot climber, the key difference with PoF being that the laser makes contact with the photovoltaic panels via fiber optic cables rather than through manually steering the beam. The company’s standard, off-the-shelf model is rated for 10 watts of direct current (DC) power, enough to charge an iPad, for example, and there are designs in place to build one that can provide 400 watts—the amount of juice needed to power either a small multicopter or a drone.

Other companies offer similar technology, but what separates LaserMotive from the rest of the pack, Nugent says, is the availability of higher wattages (most other companies’ models provide less than a watt of power) and also the added safety features. If the fiber optic cable were to be cut, for example, the laser would shut off automatically, preventing eye injuries.

The main reason customers are using the technology is for electrical isolation. One Federal research lab runs a high-voltage experiment requiring controlled explosions, Nugent says, and they don’t want a power system to suddenly have kilovolts coming back to them through electrical wires. “By using the Power over Fiber system, they are able to run this experiment and have it be completely electrically isolated, not having to worry about damaging any of the electronics in their control system.”

Meanwhile, another group is looking to use the technology for a suite of sensors that require isolation from radio frequency noise. “An electronic power supply has the potential for generating radio frequency signals that can interfere with data collection, Nugent explains, “so they’re evaluating Power over Fiber because they would be able to get a clean DC power output.”

Another potential application is for powering underwater robots. Lasers do not propagate very far through water, and conventional copper wires are heavy and thickly insulated, causing drag. PoF removes all of those inefficiencies.

In addition to PoF, LaserMotive is also working on another technology, UAV Power Links, with UAV standing for unmanned aerial vehicle. The technology works much like the one that powered the company’s prize-winning robotic climber in that a ground-based laser diode will power the device. “What we’re developing will be able to keep these UAVs powered indefinitely within the laser’s line of site,” Nugent says, adding that they’re designing it so that the photovoltaic panels and the laser will automatically point toward each other, negating the need for manual operation.

Among UAVs, multicopters stand to benefit the most from the technology; because copter blades require a lot of energy to create lift, when carrying a payload their batteries usually have to be replaced about every 20 minutes, with the landing, battery-swapping, and re-launching to get back into position taking some 15 minutes. Nugent cites Hollywood for why this is a problem. “If you’re shooting a film or a commercial, that’s a lot of down time, which is money down the drain because crews have to be out there longer and sets have to be readied again. Costs can add up quickly.”

For a UAV that’s conducting military reconnaissance, it’s not so much an issue of time savings, but the fact that they “cannot afford to have it not be in the air,” Nugent says. “Your eye in the sky is not going to be looking if you’re not up there.”

As of this writing, only the military and certain industries such as movie and television crews, with permits, are allowed to operate UAVs, but Nugent is hopeful the Federal Aviation Administration will allow more widespread commercial use of them by 2016, which is when he expects UAV Power Links to have been tried, tested, and ready for purchase. “It might not be powering a space elevator yet, but we think the technology’s ripe for revolutionizing what these aerial vehicles can do and how long they can do it.” 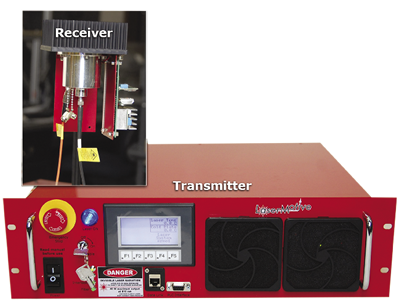 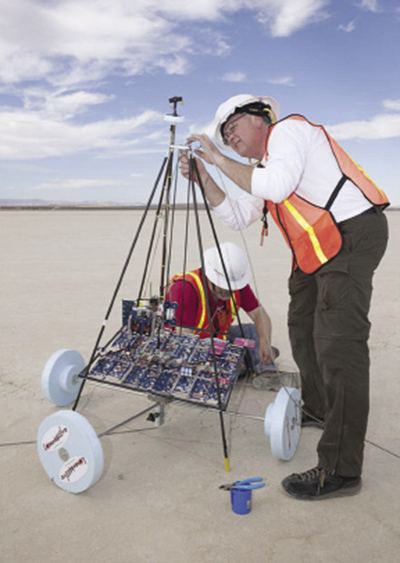 Steve Burrows (left) and Dave Bashford of LaserMotive prepare their robot for one of its successful ascents during the competition. 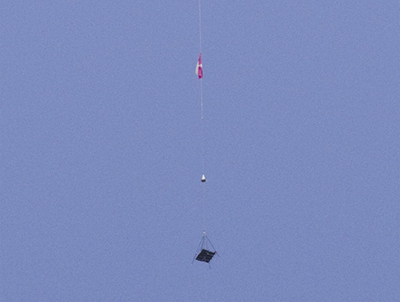 The requirements for the 2009 Power Beaming Challenge were the most demanding, as competitors had to power their robots up a dangling cable for one kilometer at a minimum speed of two meters per second to qualify for a cash prize. LaserMotive’s robotic climber was the only machine out of the three entered into the competition that reached the coveted one-kilometer bumper (left), doing so on four separates occasions and at a maximum speed of 3.97 meters per second, earning the team $900,000 from NASA. 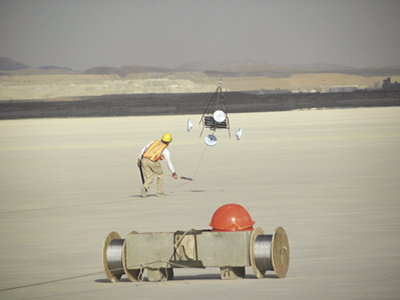 Spaceward Foundation volunteer Michael Keating served as the “tetherman” for the 2009 competition, responsible for making sure the cable did not snag and that each robotic climber was brought back to Earth gently. Here, Keating prepares to catch LaserMotive’s climber after an attempt.

An artist’s depiction of a technology that has long been a mainstay of the science fiction genre: a space elevator. Transporting and launching satellites and other spacecraft using an elevator shaft that extends thousands of miles into space would obviate the need for costly rocket launches from Earth’s surface.