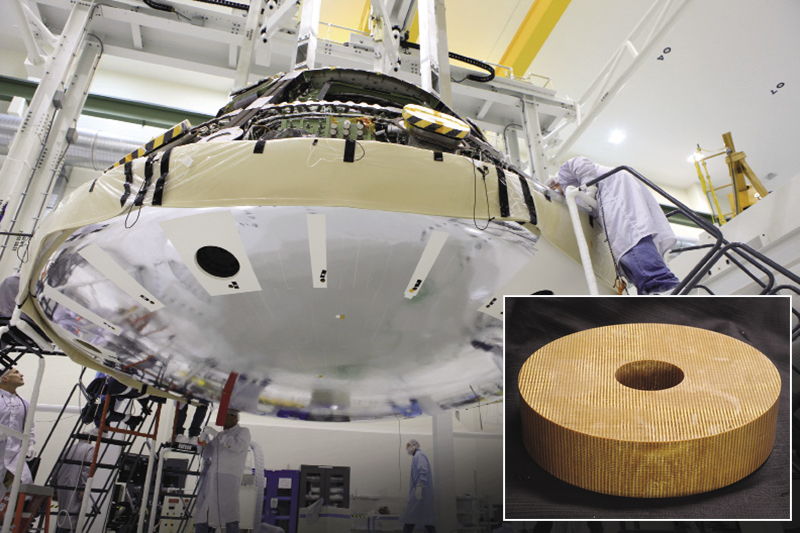 Weaving processes created millennia ago have helped create some of the most cutting-edge technology on NASA’s Orion spaceship, helping shield heat for humans who may one day ride all the way to Mars and back.

When Orion leaves Earth orbit and travels deeper into space, it’s going to have to go fast. Likewise, it will be speeding along when it returns—generating searing heat as it smashes into our atmosphere and slows down for a safe landing.

One spot on Orion’s heat shield proved particularly challenging for the engineers designing it: it needed to be not only a great insulator but also structurally strong. “Most of the heat shield is a kind of low-density material that’s very good at insulating the heat. That’s the main thing it has to do, but it’s not a very strong material,” explains materials engineer Jay Feldman, technical lead for the 3D Multifunctional Ablative Thermal Protection System (3D-MAT) at NASA’s Ames Research Center.

But there are points across the surface of the heat shield that must connect the crew capsule to its service module and, ultimately, the rocket. “At these points, you have to use a very strong, robust material,” Feldman says.

Called compression pads, these disc-shaped connection points were made of steel and carbon fiber composite for Orion’s first test flight to low-Earth orbit, which launched in late 2014. Unfortunately, the pads conducted a lot of heat, says Feldman. “It was just manageable for that first flight test, but once we were going farther and coming back faster and hotter, it would have pumped too much heat into the vehicle.”

Luckily, Feldman and other engineers at Ames were already working with partners at high-tech weaving company Bally Ribbon Mills on next-generation heat-shielding material. Together, they were developing a three-dimensional quartz-fiber composite, woven using classic shuttle looms upgraded for the modern era. They quickly realized this material could be perfect for the Orion compression pads.

Unlike the previous compression pads, made by layering together two-dimensional woven materials, the Ames team saw benefits in using three-dimensional woven composites. “When you have fibers going in all three directions, it’s very, very strong,” explains Feldman. “And we can also tailor the composition so it has relatively low thermal conductivity.”

Bally Ribbon Mills, in Bally, Pennsylvania was a natural partner for the project. A leading U.S. manufacturer of high-tech two- and three-dimensional textiles, the company’s client list includes the U.S. Air Force, Formula One racing teams, and biomedical companies.

“At NASA, we specialize in a lot of things. We have a lot of knowledge. But we don’t do weaving. Weaving is such an old art, and the weaving industry has been there much longer than NASA,” says Ethiraj Venkatapathy, project manager and chief technologist for the Entry Systems and Technologies Division.

The firm’s expertise extends back to 1923, when the family-owned company started out weaving silk hat bands.

“The first generation was just trying to build a business. They wove what was available, which was silk,” explains Mark Harries, part of the fourth generation of his family to run the textile company. “The next generation took the reins from my great grandfather, and they were still growing the business, but with man-made fibers.” As the industry changed and mass textile production moved increasingly overseas, many nearby mills were closing, but Bally Ribbon continued to evolve.

“Then the third generation came along: my father and cousin,” Harries says. “We started doing more things with new fibers, new machines, all of a sudden we’re hiring engineers and using computers to keep track of things.”

“That’s when we really found our niche,” Harries adds. “To keep the company afloat and stay in business, they started doing more smaller-run, custom items”—like the project with NASA.

The textiles NASA needed were thicker than what Bally Ribbon Mills had woven before, explains senior textile engineer Curt Wilkinson. “Bally’s limit had been two inches until this project. So we needed to modify and design special equipment in order to achieve the three-inch thickness.” NASA also wanted the same number of fibers going in all three directions, to improve compression strength.

The partnership and the resulting material have generated a lot of excitement at NASA, prompting a January 2015 visit to the mill by NASA Administrator Charles Bolden, who declared: “From this day on, the path to Mars goes through Bally, Pennsylvania.”

Bally Ribbon Mills uses a technique called 3D orthogonal weaving, in which the fibers go in three perpendicular orientations and are perfectly straight. “That is the strongest type of 3D weave you can produce,” Feldman says.

The threads are made of quartz, which is an excellent insulator, Wilkinson says. “It also has very good dielectric properties for transmitting electrical signals through it.”

The final product “is like a brick,” Wilkinson explains. “We are packing a lot of fiber in there. Many times during the development, we were unsure if we could actually pack the fiber volume that they were looking for.” Once they’re woven, the blocks get sent to another company to be infused with resin for curing and to fill pores left by the weaving, and then they are honed into the final shape.

The design is truly elegant, says Venkatapathy. “The material can be a structure, it can be a thermal protection system, it can be a shock absorber, and it can carry loads,” he says, a contrast to designs that tend to focus on just one discipline.

Venkatapathy says he sees wide-ranging applications for the material and for the design process. “We have demonstrated that for a very complicated region, a simple solution has evolved to meet the requirement. We can extend that to other places as we go toward human Mars or other very complicated human missions.”

Already the designers of Orion are looking at other spots on the vessel where the 3D-MAT material may be incorporated. And outside NASA, Government agencies and aerospace companies have expressed interest for thermal protection systems, including the Department of Defense. “They are already starting to fund new development with Bally Ribbon as a result of our NASA work,” notes Feldman.

The work for NASA has also increased the product line the company offers in more frequently used materials, like carbon fiber, to its long-standing clients, because the new equipment they designed enables thicker and denser weaves.

For example, their Formula One clients are evaluating samples. “It increases the size of the parts they can make from the 3D orthogonal weave. They’d been limited to a two-inch thickness in the past, and the three-inch thickness gives them more opportunities for different locations in the car,” Wilkinson says.

Yet underneath the high-tech add-ons, the core of the process is the same type of shuttle loom the company used for silk in the 1920s. It’s an evolution that has kept nearly 300 jobs in central Pennsylvania, where most of the other textile mills have long gone out of business.

“We incorporate modern electronic components, and we also build and incorporate our own take-up systems, but the loom itself is extremely old,” Wilkinson says. The fundamental process has been unchanged for millennia: “Using the same age-old steps of weaving, we’re now weaving material that’s going to go to Mars.” 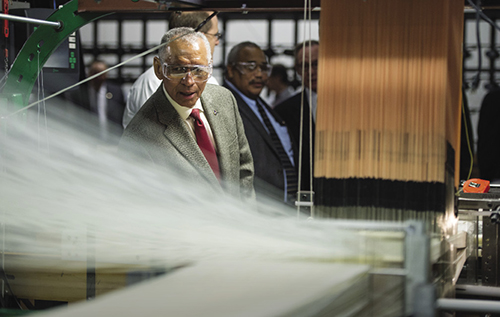 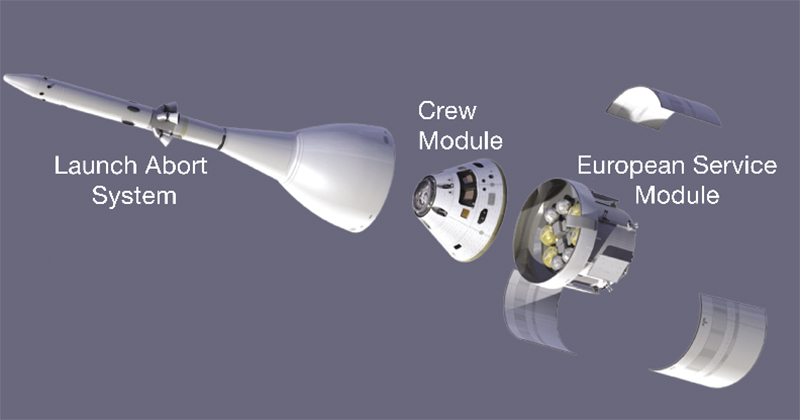 The compression pads attach where the crew module connects to the service module. The 3D woven quartz composite designed by Bally Ribbon Mills and Ames researchers is much stronger than the layered 2D composites used in the first test flight.

Orion, NASA’s new exploration spacecraft, being prepared for its first flight test in 2014. The 10-inch holes on the bottom of the spacecraft hold compression pads designed to be very good insulators while also very structurally strong. On the next test flight, these pads will be made from a 3D quartz composite woven by Bally Ribbon Mills (inset).