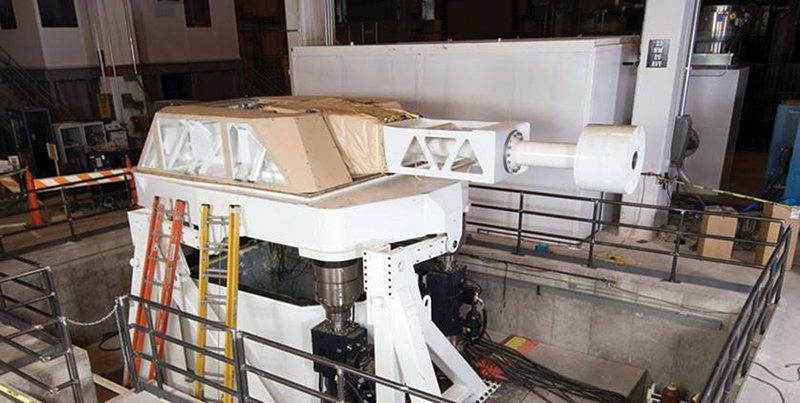 When handling a multi-billion-dollar space telescope, you want to be pretty careful.  Unless it’s your job to shake it with 100,000 pounds of force, that is.

The James Webb Space Telescope, currently under construction at the Goddard Space Flight Center, is planned to succeed the Hubble Space Telescope in 2018. It has a bigger primary mirror, can see further, and will travel deeper into space than its predecessor, sending back images of never-before-seen phenomena to help scientists better understand how galaxies, stars, and planets form.

The 14,300-pound telescope is equipped with 18 separate, intricately engineered mirrors and carefully calibrated sensors, all of which have to survive a rocket launch and bruising ride through the atmosphere at 32 times the speed of sound. In order to ensure the hardware can survive—before it gets to its destination a million miles away, where it would be nearly impossible to fix—engineers will strap the telescope to vibration tables and shake it in every direction. Hard.

It’s a process every spacecraft and satellite has gone through since the Space Agency first began sending satellites into orbit in the 1950s. To test Webb, NASA once again turned to a company that has been instrumental in the Agency’s vibration testing since the beginning: Burlington, Washington-based Team Corporation.

Goddard commissioned and installed two brand-new vibration testing devices. At 11 square feet, they are nearly twice as big as the one the center had in its basement vibration lab, also built by Team, and the new tables are engineered in some special ways as a result of their size. “Our shakers downstairs are capable of being reoriented. The new shakers have a dedicated system to do the horizontal and a separate system to do the vertical,” explains Brian Ross, lead structural dynamic test engineer for the new telescope.

“The horizontal system is more or less the same, just a lot bigger, but the vertical system is completely different. It actually has two shakers that drive the table, and then it has quite a lot of structure surrounding the table to help react out, or counterbalance, the large loads.” Each system generates up to 100 vibrations per second, mimicking the forces the telescope will encounter on launch day.

One of the new requirements Team had to meet was for a “soft stop,” ensuring that if anything went wrong during the testing, the vibrations wouldn’t stop too abruptly. “Usually, the systems are designed to protect themselves first,” explains Ross. Most of the time, the item being tested is one of many and easier to replace than the machine itself, which can cost millions of dollars.

That calculation is reversed, of course, with items like the Webb telescope, whose total cost is projected at around $8 billion. If the machine stops abruptly, that could transfer a shock to the telescope, causing damage. So at NASA’s request, Team built in a system that would ensure the shaking would allow at least four-tenths of a second to slow down before stopping: not much, but enough to protect the telescope.

In the early days of the aerospace industry, certain aspects of the air and spacecraft development process remained fairly primitive, and one of those, explains Team’s Curt Nelson, was the testing procedure. “Basically they built it, stuck someone into it, flew off, and saw what happened,” says Nelson, who is in charge of North American military and aerospace sales for the company.

Engineers recognized the need for better preflight testing, and Vern Tauscher, who started working in aviation after World War II, devised a machine to provide powerful vibrations, based on reverse engineering of a German rocket. “He developed our very first product, the HydraShaker,” Nelson says. “We still build variations of that device every day. Bigger, smaller, but the core technology is basically the same.”

Tauscher founded Team, which stands for Tauscher Engineering and Manufacturing, in 1954. His first clients were in the military aviation industry, but when NASA started testing spacecraft, it also turned to Tauscher. Needing improved equipment for the demands of spacecraft, Team invented under a NASA contract what it calls Model 1830 T and V bearings, which are stiff and frictionless and can carry both tension and compression.

The first shaker using these bearings was delivered to NASA and was used to test the Vanguard 1 satellite, one of the first U.S. satellites ever launched into orbit. Today thousands of these T and V bearings are used around the world in vibration testing equipment.

Team specializes in high-end custom equipment, solving problems in ways that haven’t been done before, Nelson says. Its machines can be found in pretty much every Department of Defense and Department of Energy lab and are used by companies including Boeing, Lockheed Martin, and Northrop Grumman to test equipment ranging from tanks and airplanes to nuclear warheads. The machines also test a variety of more everyday objects, from cars to yogurt containers.

In addition to a rocket launch, these devices can recreate conditions of a bouncing road or a massive earthquake. It’s all aimed at determining just how well a structure will hold up in real life in a moment of extreme stress or over a lifetime of wear and tear.

Updates on those same hydrostatic bearings first designed for NASA in the 1950s can still be found in a number of the vibration testers, including ones used by some of the world’s largest car companies. Team equipment tests individual components, from engine valves all the way up to passenger seats, as well as what’s called “end-of-the-line” testing, when the whole car is put together.

Using four small vertical shakers, one under each car wheel, automakers like Ford Motor Company test how well the fully-assembled car or light truck will perform once it hits the road: will it squeak and rattle? Will the parts hold up during tens of thousands of miles of highways and country roads?

Team is working up a massive new proposal using these four-poster shakers for a company looking for “super high performance,” Nelson says, a project that could be worth $75 million if fully implemented. He is cautiously optimistic that the company will get the job, he says, a result he attributes directly to the expertise Team built in its work with NASA.

“We’ve evolved this in-house knowledge NASA has been fundamental in helping us develop, and we bring that to bear on all our products.”

Abstract
Team Corporation has been building vibration-testing equipment for NASA since the 1950s. Most recently, the Burlington, Washington-based company built a high-powered system to test the James Webb Space Telescope at Goddard Space Flight Center. Innovations the company has made to satisfy the Agency_s requirements over the years have been used in their commercial products for testing nuclear warheads, cars, and many other items. 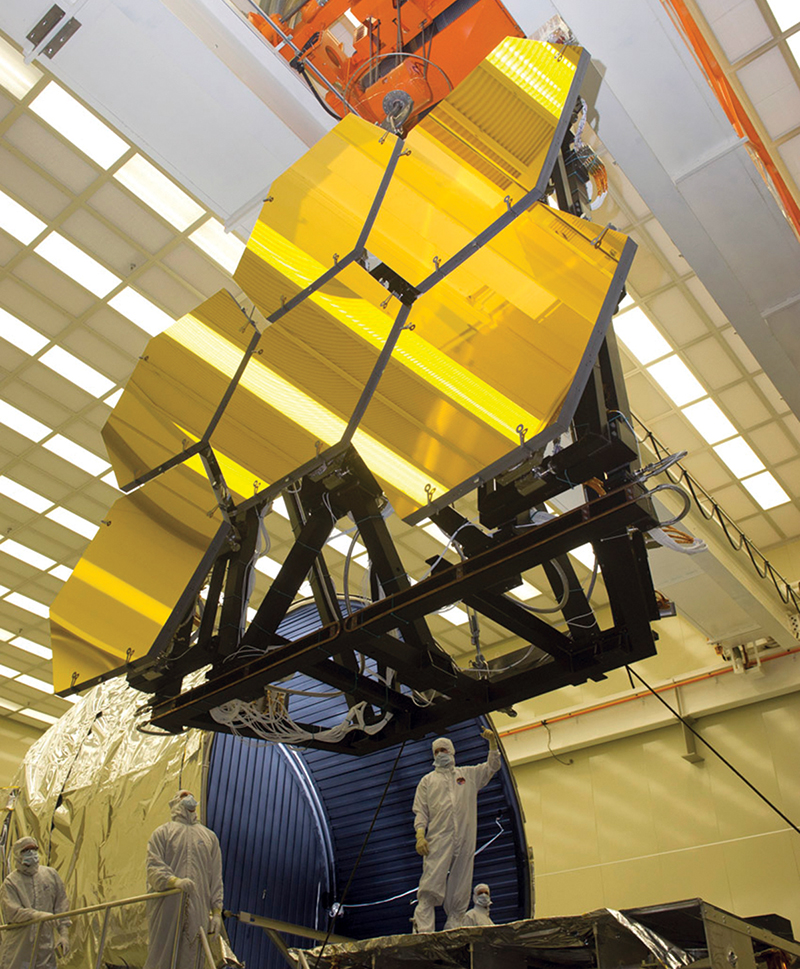 The James Webb Space Telescope, set to succeed Hubble in 2018, is equipped with 18 separate, intricately engineered mirrors and carefully calibrated sensors, all of which will require testing before being sent to space. Here the mirrors emerge from deep-freeze testing at Marshall Space Flight Center. Later, once the telescope is fully assembled, it will be shaken on super-sized vibration tables, custom built by Team, to ensure it can withstand the forces of a rocket launch. 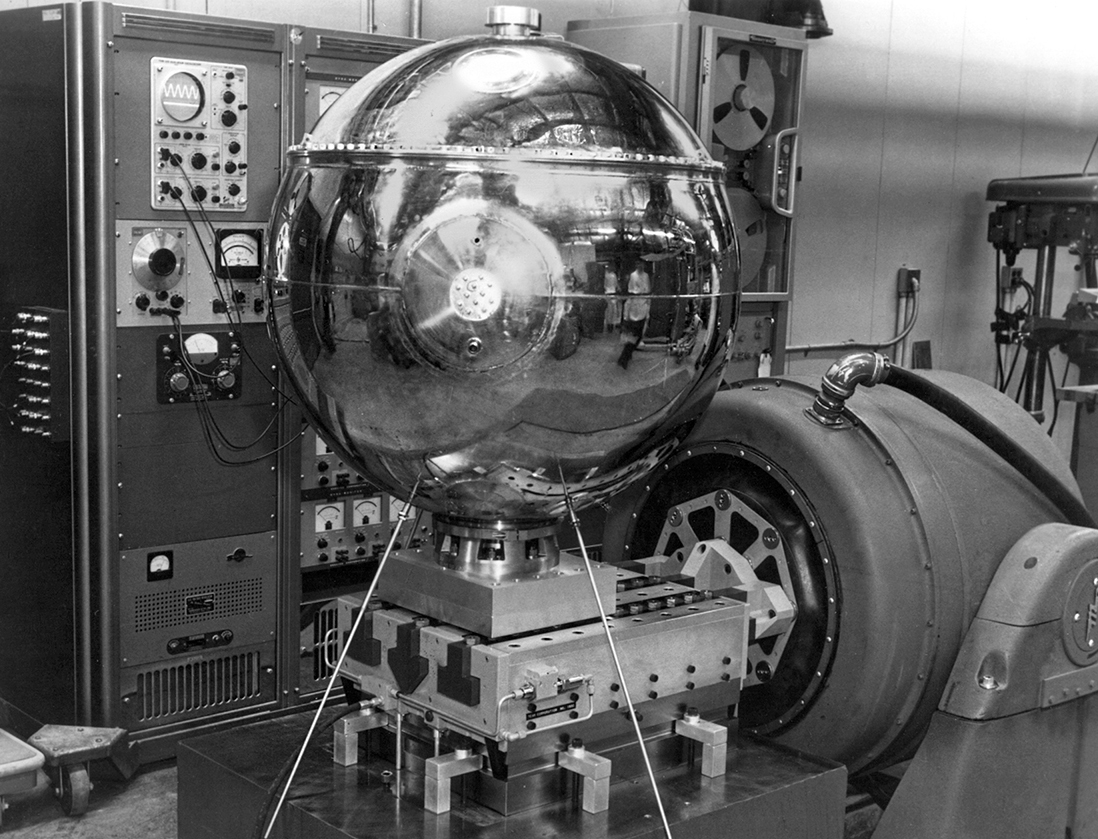 The Vanguard 1, one of the first satellites ever launched into orbit and the oldest satellite still orbiting Earth, was tested on a vibration table built by Team Corporation in the late 1950s. Innovations incorporated into those early devices are still used in Team’s commercial products to this day.

Team Corporation designed and built a system to mimic the forces this cannon turret, made by BAE Systems, would experience when driven at high speed over rough terrain. The testing showed 147 different hardware failures that the company was able to correct before the machine was ever deployed in the field.