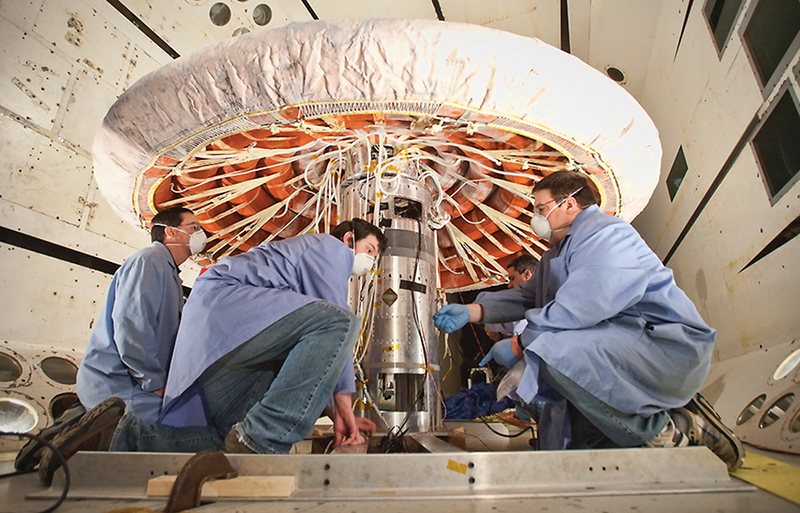 The challenge: make a powerful insulating material that is lightweight, strong, and flexible. The goal: an inflatable decelerator that can be folded up inside a spacecraft and then whipped out to create drag during landing. The bonus: a new material for warmer pipes, better antennas, and, potentially, gloves for astronauts on Mars.

Senior researcher Mary Ann Meador at Glenn Research Center knew where to start. The materials engineer had been working with silica aerogels: low-density solids filled with nano-size pores that make them superb insulators. They are created by dissolving a material in a solution to create a gel, almost like Jell-O. Then the solvent is dried out, leaving just the gel structure: a network interspersed with tiny pockets of air where the solvent used to be. The problem was that, made out of silica, aerogels are brittle, like glass.

“We were trying to build an inflatable structure contained in the rocket shroud for, say, a trip to Mars. When you get close to Mars, you would deploy this thing, like an umbrella in front of the spacecraft that would create drag,” she explains. Historically, the blunt body shape of the aeroshell has been used to help slow spaceships as they pass through the atmosphere. But to send the heavier loads needed for human missions to Mars, or to slow down fast enough to land in some of the Red Planet’s high-altitude locations, engineers needed something bigger.

At first, Meador’s team had experimented with reinforcing the silica structure with polymers. That made the material better in some ways, she recalls, but it wouldn’t be enough to work in an inflatable decelerator.

Instead, they decided to make an aerogel directly from the polymer. They chose polyimides for their strength and ability to withstand extremely high temperatures. After all, even as an interior insulation layer, the material had to be able to withstand temperatures of 1,100 °F for at least 90 seconds in order to ensure it wouldn’t burn up during atmospheric entry.

Meador and her team succeeded at making aerogels out of polyimides and found them to be five times stronger than the polymer-reinforced silica aerogels when cast into a thick layer. However, making them thin enough to be truly foldable proved challenging.

“The first ones we made that were somewhat flexible were probably on the order of maybe a quarter-inch thick,” Meador recalls. “I remember having a meeting with the program managers for the project, and, not appreciating what a major thing that was, they just kind of bent them and cracked them in half and said, well that’s not very good.”

“After that broke our hearts,” she says with a laugh, “we went and started making them even thinner, casting them as films on the order of half a millimeter thick. At that point you could crease them and they could be unfolded and not crack.” And if you used many thin layers, you could retain that ability to be folded, while still creating enough insulation for the heat shield.

In 2015, Spencer, Massachusetts-based FLEXcon licensed the technology after coming across the Glenn Research Center booth at a NASA Technology Days showcase, explains FLEXcon original equipment manufacturing director Ken Koldan. “Around that time, we started looking at other companies who create aerogels, and we ran across Blueshift. We made an investment in Blueshift, and from there, we got together and then approached NASA with the concept of: let’s license the technology directly.”

Blueshift was also working with polyimide aerogels, but its process did not achieve the same levels of thermal insulation as Meador’s, Koldan says. After licensing the technology Glenn, FLEXcon, and Blueshift were able to work together to produce the material to NASA’s higher specifications, on a much larger scale.

Polyimide aerogel has very low thermal conductivity with a very stable structure. The thin film format is sold to make protective wraps to insulate pipes in extreme environments, and FLEXcon is exploring markets for consumer goods as well, like a high-end jacket for outdoor athletes.

“Because it’s an open-cell structure, it allows moisture to get out but then also has the ability to insulate,” Koldan says. And the thin, flexible material means a less bulky product.

The material also works extremely well in antennas, because the highly porous structure offers very low resistance for electromagnetic waves to pass through. “You wind up with a 70 percent lighter antenna due to the 0.15 gram-per-cubic-centimeter density and with 80 percent further range due to the dielectric constant of 1.2 for a given set of antenna performance parameters,” Koldan says. “From that standpoint, that’s another reason FLEXcon got very excited about polyimide aerogels,” he adds. “Think of all the places you could use this material; look at how many things involve electromagnetic radiation. Whether it is in the back bumper of an automobile which senses collision detection, all the way to planes that have radar in the nose tips, and wireless routers, they all have antennas in them.” So far, FLEXcon has had interest from Government entities developing antennas with polyimide aerogels for military applications, and Koldan says he thinks private companies won’t be far behind.

For insulation, as well, he says, “the market potential is pretty high. As things get smaller and faster, they generate more heat. And so being able to isolate heat and cold from things is always going to be important. And aerogels are a great way to do it.”

The company is already seeing dividends from its investment in the NASA technology: Blueshift has hired five new people to handle the increased business requests thanks to this license agreement.

“The industry adopted the polyimide aerogel a lot more quickly than we thought they would,” Koldan says, with sales starting about a year ahead of what FLEXcon projected.

The project Koldan says he is most excited about is with Brooklyn-based Final Frontier Design, which was awarded a NASA Small Business Innovation Research contract to design a next-generation spacesuit glove that could end up on astronauts heading to Mars. The skin-tight mechanical counter-pressure glove would reduce bulk as well as the dangerous risk of puncture in space, Final Frontier says.

The spacesuit glove was not something Koldan says he or his team ever considered as it studied the market potential of polyimide aerogels. “No one in the room thought of a glove that astronauts are going to wear on Mars. That was the most surprising one to us, the coolest.”

For a company that has been evolving since it was founded by Myles McDonough in his garage some six decades ago, Koldan says, the new doors opened by the NASA partnership are very exciting.  “To go from making material for a pair of women’s shoes and now to material for a Mars glove—we’ve come a long way with technology.”

Abstract
Research Center_s Mary Ann Meador is an expert in aerogels: low-density solids that make excellent insulators. Using polyimide polymers, she and her team created a new aerogel five times stronger than earlier polymer-reinforced silica aerogels and one that can be cast into a thin, very flexible layer. FLEXcon, in Spencer, Massachusetts, licensed the patent in 2015 and is selling the aerogel as insulation for pipes in extreme environments, among other applications. 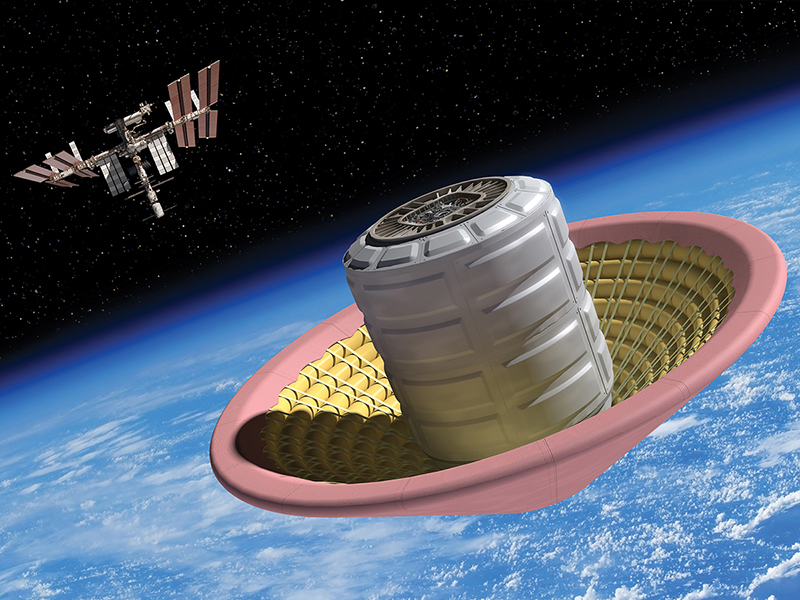 This artist’s rendering shows an inflatable heat shield that is expanded to create drag during landing. To build it, NASA needed a lightweight, strong, and flexible material that was also an excellent insulator. Glenn researcher Mary Ann Meador created a polyimide aerogel that fit the bill. 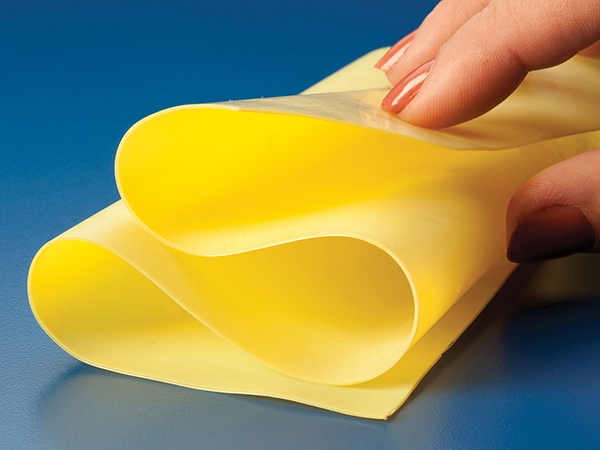 NASA reseracher Mary Ann Meador chose to make aerogel out of polyimides because these polymers are very strong and able to withstand extremely high temperatures. Making it in layers that were thin enough to be truly flexible was a challenge, but she and her team ultimately were able to cast layers just half a millimeter thick.

Engineers examine an inflated heat shield after it was tested in a vacuum at NASA’s Langley Research Center. These Hypersonic Inflatable Aerodynamic Decelerators, or HIADs, may prove more economical and efficient for carrying heavy loads to planets with an atmosphere.