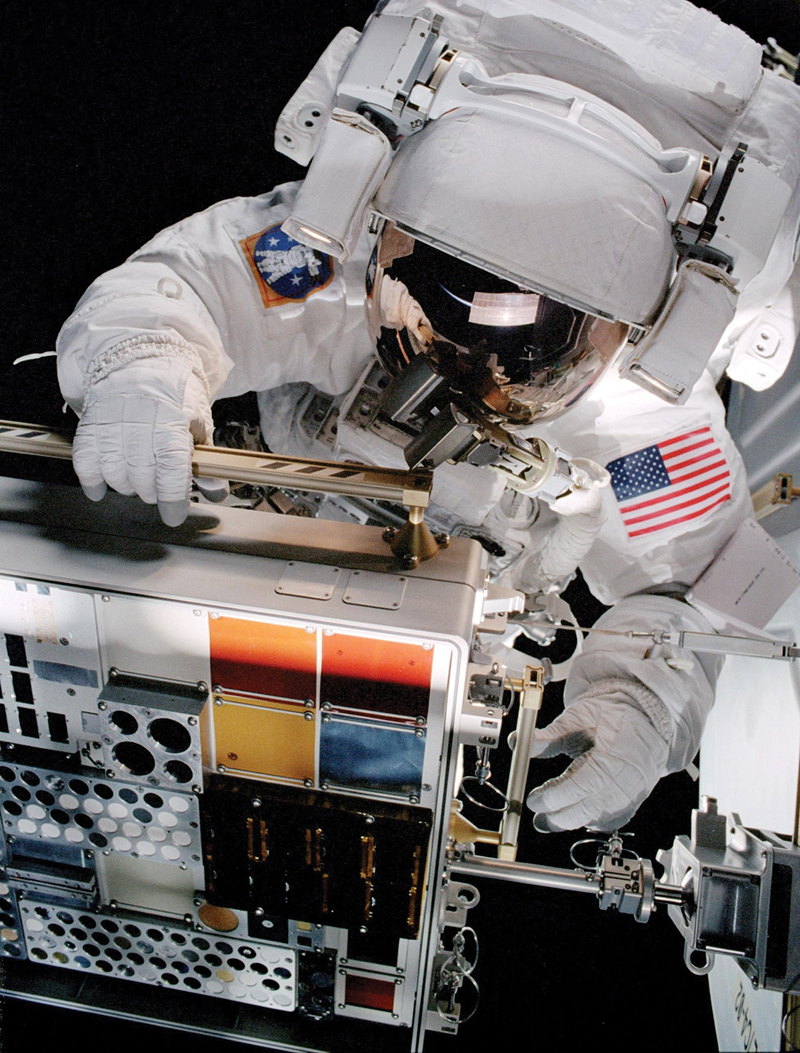 The conditions of space are, perhaps thankfully, difficult to reproduce on Earth. Most of the universe, beyond the atmospheres of its occasional planets, is an airless void full of dangerous radiation and other conditions that can harm not just organisms but also many materials. These conditions can be created in a laboratory, but imposing all of them at once is too difficult to be practical.

This is why, since 2001, NASA has carried out its Materials International Space Station Experiment (MISSE) series, bringing a variety of specimens into orbit to see what happens to them.

Objects in space experience extreme heat and cold, depending on their exposure to the sun. Solar radiation includes not just heat and light but also ultraviolet rays and charged particles. These can break molecular bonds but on Earth are largely blocked by the atmosphere and magnetosphere. And in low-Earth orbit, where most human space activity takes place, that ultraviolet light breaks apart stray oxygen molecules from the atmosphere to create atomic oxygen, which is highly reactive and tends to damage organic materials it interacts with.

During eight MISSE deployments, NASA has put thousands of specimens to the test, most being materials and components considered for use in space, although organic samples like seeds and spores have also been flown. Each mission included hundreds of samples in tiny containers, collected into larger containers that were housed on the outside of the International Space Station (ISS).

Future material science research on the ISS will be conducted on a new MISSE facility, where some of the space is reserved for NASA research, but the rest is available for use by companies, universities, and other Government agencies.

Either NASA or the Naval Research Laboratory has always managed the MISSE series, although a company called MEI Technologies (MEIT) has packaged the payloads and ensured they met constraints for weight, space, and other factors in support of the Department of Defense Space Test Program, which sponsored the payloads.

The next deployment, set for mid-2017, will be different. It—and all future MISSE experiments—will be managed entirely by Alpha Space, a spinoff from MEIT located in Houston, which will not just integrate the payloads but build the containers and housing that hold them.

The transfer to a private company is part of a larger change taking place in the U.S.-owned portion of the ISS, known as the National Laboratory.

“It’s not a shift in how the National Lab is run, it’s a shift in how we’re seeking to acquire new capabilities,” says Mike Read, who manages the National Lab Office at Johnson Space Center, noting that NASA is now often seeking commercial partners to upgrade or add facilities on the ISS. “It’s a totally different approach than the one we’ve traditionally taken,” he says. “The budgets we had didn’t support the traditional approach, so we began seeking opportunities to acquire services by buying them, rather than by buying hardware.”

When NASA put out a call for a company to develop and operate MISSE, MEIT, well familiar with the program, responded and was subsequently chosen, creating Alpha Space to run as a commercial entity. Under cooperative agreements with Alpha Space, Johnson is helping to fund the new platform’s development and covering some of the company’s risk, while Alpha Space will rent out the portions of MISSE that don’t belong to NASA.

The facility is scheduled to be delivered to NASA in March 2017 and flown to the ISS soon after, depending on launch schedules.

Stephanie Murphy, principal owner and president of Alpha Space, says the “new and improved” testing facility, which the company designed, will present several advantages over previous iterations of MISSE while keeping costs to customers the same or lower.

For one thing, commercial customers can avoid the bureaucracy of obtaining NASA approval and sponsorship, she says. “You can come straight to us, so the time and expense it takes are both less.”

A major difference is that payloads will all be installed and removed by the station’s external robotic arms, whereas previous units were all handled by astronauts during what are known as extravehicular activities (EVAs). “We don’t have to wait for an EVA to be scheduled and risk falling off the bottom of the EVA agenda,” says Johnnie Engelhardt, Alpha Space’s MISSE build project manager, adding that this also helps keep the cost down. “EVAs are not cheap.”

While earlier units faced one or two directions and were opened by astronauts when installed and closed upon their retirement, the new one will face four directions, with the carriers opening and closing independently. This allows samples to be exposed for different lengths of time and also allows the facility to protect its contents from contamination while vehicles maneuver nearby. Alpha Space will control all this from the ground.

By housing carriers in all four directions, the facility allows experiments to be exposed to different elements. For example, those facing the wake side, behind the space station, are not exposed to atomic oxygen, while those on the zenith side receive full exposure to the sun. This selectivity can help researchers determine which elements are causing degradation. Carriers can even be moved in flight if the ISS changes its angle.

The new facility will have more robust data connections than its predecessors, transmitting experiment health and status data once per second and supporting more experiments. “It’s real-time monitoring, really,” Murphy says. The data will come from sensors that monitor temperature, atomic oxygen, ultraviolet exposure, radiation, and other conditions, as well as contamination, although Engelhardt adds, “The sensor package can be anything the principle investigators want it to be.”

The contamination sensor, a quartz crystal microbalance capable of picking up contaminants as small as an atom, is new, as is a high-resolution camera on a trolley in each of the 12 carriers. The camera will be scheduled to take pictures of each sample once a month so experimenters can have a time-lapsed history of a sample during its time in orbit.

Another factor that will keep costs down is that the facility will be permanent, whereas housings for previous missions were flown up with the experiments and discarded after retrieval. The new arrangement will reduce the size and mass, and therefore the cost, of sending up and returning MISSE payloads.

“When you have the infrastructure in place, it becomes a lot cheaper,” Engelhardt says.

“We really have a plug-and-play model, and that’s what makes it so much more affordable,” Murphy adds. She says many of the changes in approach came from lessons MEIT learned from its years of managing payloads for these missions.

This, she says, is another advantage the company has. “Even though we’re small and new, we have access to engineers with 20, 30 years of experience at a moment’s notice,” Murphy says. “That’s the unique ace we have in our back pocket.”

Murphy says NASA’s partnerships with businesses in low-Earth orbit are opening the space economy to companies that don’t necessarily have a background in technology. “I think we’re one of the first companies on the ISS who aren’t engineers who saw an opportunity to advance their technology—we’re entrepreneurs who saw a business opportunity,” she says.

In addition to improving next-generation spacecraft, MISSE experiments have potential applications backon Earth. Research on atomic oxygen exposure could lead to better fire-retardant and rust-resistant materials, and ultraviolet radiation research has the potential to improve structural materials like plastic siding for houses. Among the results of past MISSE missions is a static-dissipating paint that was used on the Curiosity Mars rover and will help protect communication, weather, and Earth-observing satellites.

Abstract
NASA_s Materials International Space Station Experiment (MISSE) series tests the effects of exposure to space on various materials, housing them outside the ISS. Under cooperative agreements with Johnson Space Center, Houston-based Alpha Space is designing the next MISSE facility to provide advantages over previous versions at lower costs. Space not reserved for NASA on the new facility, scheduled for launch in 2017, will be available for purchase by companies, universities, and Government agencies. 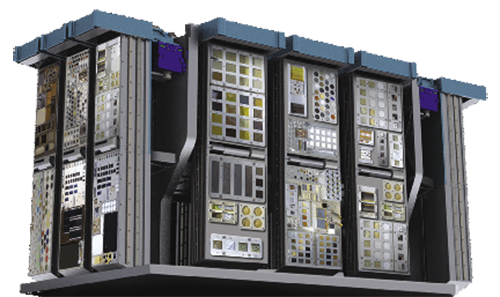 This is a prototype of Alpha Space’s MISSE facility. With containers facing in four directions and able to open and close independently, the facility can customize space exposure for different samples. 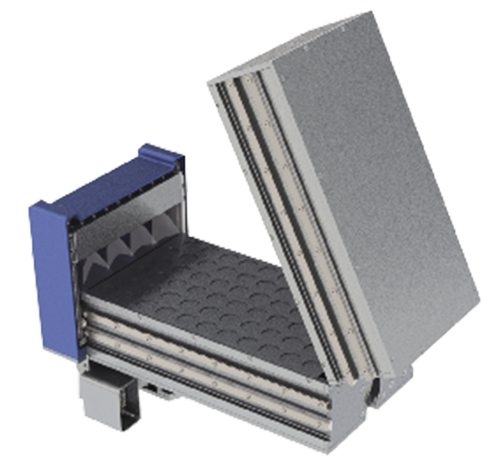 A prototype of Alpha Space’s MISSE containers unfolds. Each will carry dozens of material samples, testing their reaction to prolonged exposure to the elements of space.

An astronaut installs a Materials International Space Station Experiment (MISSE) facility on the exterior of the ISS during a spacewalk in 2001. Future iterations of MISSE, handled by Alpha Space, will be installed and maintained via robotic arm, eliminating reliance on spacewalks.