Anyone who can remember when cars had vinyl dashboards may be familiar with the hazy film that could appear on the windows during a hot, sunny day. This was the result of offgassing: volatile compounds in the vinyl, excited by the trapped heat, escaped into the air and condensed on cooler surfaces. Similar to offgassing, outgassing occurs when certain materials are subjected to the vacuum of space. Outgassing can pose a significant problem to spacecraft engineers, as their creations will be subjected to extreme temperature fluctuations due to the sun’s unfiltered radiation. If a film forms on surfaces, there won’t be anyone around to wipe them down.

The problem is only exacerbated by the fact that a craft’s colder surfaces include crucial components such as lenses, mirrors, and windows. “If a substance gets heated up and gives off condensable volatiles, in a vacuum, they’re going to be drawn right onto cold surfaces,” says Debbie Thomas, a senior materials engineer with Ball Aerospace, who has run the Outgassing Laboratory as a contractor at NASA’s Goddard Space Flight Center for the last 15 years.

For almost half a century, the lab has been building a database on the performance of materials and components—more than 11,000 of them and counting. In addition to testing materials for NASA’s projects, until a couple of years ago, the lab also offered testing to outside entities as space and schedules allowed. The service helped companies prove their products’ spaceworthiness, and it also augmented the Agency’s database, which is now online and used as a reference not just by NASA but by engineers all over the world.

Feedback from users around the world indicate the widespread use of the database. Thomas says she has received emails from Taiwan, Europe, and elsewhere. “A lot of people use it every day.”

Among the last specimens she tested for a commercial entity were four variations of CRP USA’s Windform 3D printing materials. The tests marked the beginning of applications in a whole new industry for a family of materials that had been finding new applications since they first started out in the Formula 1 racing industry.

CRP USA, headquartered in Mooresville, North Carolina, is part of the Italian-based CRP Group, which invented the first Windform materials in the early 2000s. These are polyimides reinforced with carbon or glass microfibers. They vary in properties like electrical conductance, water resistance, static dissipation, and elasticity but are generally valued for providing high strength at low weights.

Another key advantage: Windform materials can be used in 3D printers that employ selective laser sintering. The process can print almost any shape as one solid object, create multiple objects simultaneously, and ensure the absence of voids in the material that can occur with other additive manufacturing processes.

CRP first used the material to build Formula 1 models for testing in wind tunnels, but soon they were using it to create end-use parts of the racecars themselves and then pieces of racing motorcycles, before moving into the boating, architecture, defense, medical, and entertainment industries.

Even so, Stewart Davis, CRP USA’s director of operations, wasn’t aware of outgassing tests until an acquaintance contacted him about the possibility of using Windform on a satellite and asked whether the materials had been tested for volatile compounds. “If you haven’t had that test, they won’t let you fly it,” Davis says.

A friend at Northrup Grumman managed to get one material, Windform XT, tested. “We didn’t think it would pass, but we said, we’ll give it a shot,” says Davis. It did pass, and the company’s interest was piqued. That was when he heard Goddard offered the testing.

Goddard’s Outgassing Laboratory tests materials by placing them in 50 percent humidity for 24 hours, followed by 24 hours in a vacuum at 125 °C, or nearly 260 °F. Any condensable volatile compounds will flow through a hole in the chamber to a collector plate held at 25 °C. The material is then weighed to determine the total mass lost due to heating in the vacuum, and the plates are weighed to determine the collected volatile condensable material. The samples are then placed back in 50 percent humidity for 24 hours and reweighed to confirm how much of the lost mass represented water weight.

It’s a technique Stanford Research Institute developed in the mid-1960s under contract to NASA’s Jet Propulsion Laboratory, which was later adopted by the American Society for Testing and Materials as a standard test method.

Three samples are tested, and the results are averaged. To pass, a material’s average total mass loss coming out of the vacuum must be less than 1 percent, and the condensable volatile material outgassed cannot exceed 0.1 percent. NASA’s materials engineers use the results of the test as an initial screening test to determine the risk of contamination from outgassing.

CRP’s materials all had total mass losses of around 0.5 percent and, more importantly, only 0.06 percent or less of their masses were outgassed as condensable volatile materials. In fact, two of them—LX 2.0 and XT 2.0—lost nothing but water.

“A private company testing it and submitting results wouldn’t have the same weight as the guys who put payloads up in space,” Davis says, adding that the testing was “extremely useful, because anyone who checks that website knows the full results.”

Since they were performed in 2013, the tests have led to business with 10 to 15 companies for whom CRP USA has produced components for use in space as well as supporting roles, such as prototypes or tooling devices, he says. “We had no space exposure before, and it’s completely new and untried territory.”

One of those partners is Millennium Space Systems, to whom CRP provides parts for small satellites under Millennium’s Bootstrap program, aimed at building and launching affordable satellite systems with quick turnaround times. The company uses Windform XT 2.0 on the outside of satellites because of its electrical conductivity, which dissipates static charges, and its ability to deflect heat. Windform LX 2.0 is used to make internal components due to its lack of conductivity and similarly high heat resistance.

Their high strength-to-mass ratio also makes both materials, and especially XT 2.0, desirable for space applications, where weight is a major factor in launch costs, Davis says. “Our LX 2.0 and XT 2.0 are some of the lightest, strongest substances you can get for manufacturing with 3D printing.”

Another advantage over metal for space applications is that Windform would burn up on atmospheric reentry, eliminating any concerns about debris falling to Earth.

These early forays into the space industry have also led the company to work with the European Space Agency and the Japan Aerospace Exploration Agency, although they each ran their own outgassing tests.

“It’s been interesting for us to learn about these different test requirements,” Davis says, noting that the company has since learned that the testing could also make Windform preferable for some Earth applications where outgassing is an issue, such as camera housings and optical scopes.

Abstract
Industry In 2013, the Goddard Space Flight Center Outgassing Laboratory tested four varieties of Windform fiber-reinforced polyimides for their manufacturer, CRP USA, headquartered in Mooresville, North Carolina. The lab found that the materials, which are used for 3D printing, met NASA_s standards for low outgassing. As a result, the company entered the space business, where it has found around a dozen clients. High strength and temperature resistance are among the materials_ advantages for space applications. 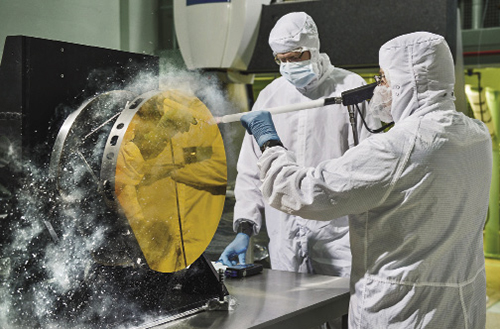 Engineers at Goddard Space Flight Center use carbon dioxide “snow” to clean a test mirror for the James Webb Space Telescope. Because they’re cold, components like mirrors and lenses, which have to be completely clean and flawless in space imagers, are among the first places any volatile compounds outgassed from a spacecraft’s materials will condense, causing fogging. To prevent this, all materials used in spacecraft have to demonstrate extremely low outgassing. 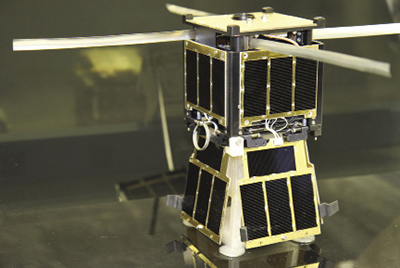 Students at the University of Kentucky and Morehead State University used 3D-printed Windform material to build their KySat-2 CubeSat, a proof-of-concept spacecraft to demonstrate technologies the students developed.