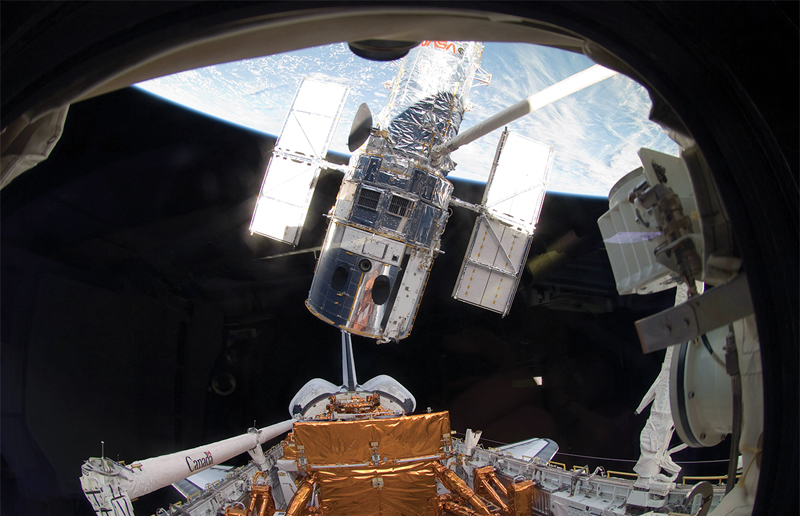 When it was built, the Space Shuttle boasted the world’s most complex avionics system. The Shuttle’s controls were entirely digital, with all connections routed through wires and computers in what was known as a “fly-by-wire” system. All of the computer subsystems, which pervaded the spacecraft, were integrated. This allowed them to communicate with each other and automatically control functions like flight stabilization or engine performance.

With all of the Shuttle’s critical functions relying on them, the electrical systems had to be fail-safe, so they were redundant and closely monitored.

Meanwhile, the Hubble Space Telescope, like other satellites, relies entirely on energy gathered by its solar panels and stored in batteries to run its instruments, computers, and transmitters. During each orbit, it has 61 minutes of sunlight to store at least enough energy to operate throughout the entire 97-minute circuit.

With limited resources, power management is crucial to any space vehicle. Due to the cost per pound of escaping Earth’s gravity, the electrical systems, like everything else on a spacecraft, are optimized to the limit, so changes in any component’s performance can negatively affect overall operations.

Monitoring power flows on both of these iconic spacecraft were—and in the case of Hubble, still are—current sensors supplied by American Aerospace Controls (AAC), based in Farmingdale, New York. The various wires of the Shuttle’s fly-by-wire system and Hubble’s solar-powered organs were run through little current and voltage sensors the company provided as a subcontractor to Rockwell International for the Shuttle and Lockheed Corporation, now Lockheed Martin, for the space telescope.

Current sensing is more often accomplished with a shunt resistor connected to the circuit, which siphons energy while measuring its flow. For spacecraft that need to operate at maximum efficiency, however, AAC’s noninvasive sensors, based on a coil that surrounds a wire without making contact with it, are preferable.

The company, which specializes in current sensors, had provided some off-the-shelf equipment for NASA laboratories in the 1960s, but the custom Shuttle work of the following decades, coming out of Johnson Space Center, led to AAC’s first products in space.

“The first time we were approached about space applications, it was something we had to stretch our capabilities to do,” says Kevin McBrien, the company’s vice president of sales and marketing.

As more Shuttle work, and then Hubble projects for Marshall Space Flight Center, rolled in, the company built up its ability to meet NASA’s needs.

“Probably one of the first, biggest changes that came from working with the Shuttle was a real, live quality-control system,” says Bob Baumert, vice president of engineering. “With spacecraft applications, they’re usually buying a unique part that’s tailored or application-specific.” So the company might make only two or three of a certain design, but they would have to meet 40 or 50 requirements, particularly for the ability to endure intense vibrations, extreme temperatures, and radiation while resisting electromagnetic interference, he says. Parts also have to be small, lightweight, and highly efficient. Like everything else on the Space Shuttle, they also had to include the precautions of redundant functions and a back-up mode.

While most companies hire a subcontractor for product testing, adding to the time and cost of production, to meet NASA’s high quality-control and quick turnaround requirements, AAC brought all this testing equipment and personnel in-house, says Piotr Pacholski, principal engineer.

The testing also required thorough documentation. “You have to prove on paper and by testing that your design approach is the right approach,” Baumert says. So more engineers were brought onboard to handle the required paperwork.

The ability to produce, test, and document highly reliable, rugged, efficient current sensors won AAC contracts to provide 34 sensors for Hubble—which are still working more than 25 years later—and went on to secure the company a broad customer base in the private sector and overseas.

“It’s a spinoff of capabilities and documentation that has allowed us to leverage the NASA work beyond NASA and abroad,” McBrien says.

While AAC started out making primarily standardized parts, with the NASA work, that focus shifted to customized sensors, primarily for aerospace applications. “We have sort of become the high-reliability, custom current-sensor manufacturer,” says McBrien, although he adds that specialized work often has enlarged the company’s catalog. “If we had 45 part numbers when we started dealing with NASA, today that number is in the thousands.”

The Space Agency remains a customer, and AAC sensors are commonly used on satellites flown by the Department of Defense and others. The European Space Agency’s contractors are frequent customers, particularly the Société Anonyme Belge de Constructions Aéronautiques, a major Belgian aeronautics and space company that also supplies businesses like Airbus, Dassault Aviation, Gulfstream, and Arianespace.

But AAC has found customers across the aircraft, rail, industrial, and defense markets as well. “As long as you need to use a sensor to see what’s going on with a particular wire or power supply, you’d use us,” McBrien says.

On a plane, the sensors might tell the pilot whether systems like the windscreen heating are on. McBrien notes that the company’s in-house testing and documentation capabilities are used for anything that requires approval from the Federal Aviation Administration.

The ruggedness developed to stand up to the vibrations of liftoff and other harsh conditions has attracted customers from helicopter companies to the mining industry.

AAC recently was awarded its fifth Boeing Supplier Excellence Award. “None of that would have happened if we hadn’t done our work with NASA from the start,” Baumert says, pointing out that the company wouldn’t otherwise be able to meet Boeing’s standards. “Without question, in our company’s 50 years, probably the single biggest thing that helped us grow was our initial work with NASA.”

Abstract
Subcontracts to provide current and voltage sensors first for the Space Shuttle at Johnson Space Center and then for the Hubble Space Telescope at Marshall Space Flight Center led American Aerospace Controls to develop the ability to create, test, and document highly reliable, customized components. Having started out making standardized parts, the Farmingdale, New York-based company leveraged these capabilities to cultivate a broad, international customer base for specially tailored, space-grade transducers. 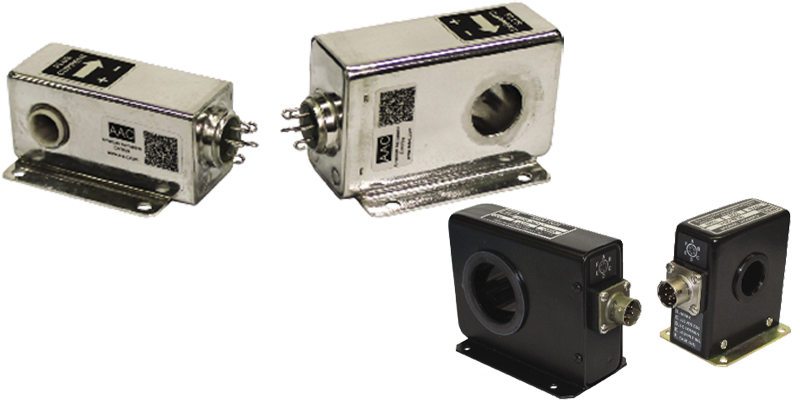 The larger silver-colored unit is a current sensor American Aerospace Controls supplied for the Hubble Space Telescope and similar programs, while the smaller one is a more recent sensor the company supplies for satellite launch vehicles. Both are space-qualified, radiation hardened, and hermetically sealed to eliminate electromagnetic interference. The two black current sensors are used on NASA’s RQ-4 Global Hawk and the U.S. Navy’s MQ-8 Fire Scout, where they monitor the unmanned aerial vehicles’ main electrical distribution systems. The company based them on designs originally created for the Shuttle program.

The remote manipulator system on the Space Shuttle Atlantis lifts the Hubble Space Telescope from the cargo bay during the final mission to service Hubble in 2009. American Aerospace Controls’ first parts in space were current sensors in the Shuttle’s avionics system, and the company’s sensors are still orbiting Earth on Hubble.