Traveling nearly five miles per second, the Space Shuttle began each reentry with nothing to slow it down but the air. The gasses rushing over its wings’ leading edges formed a shockwave that heated the air to the point of breaking apart molecular bonds, producing an electrically charged plasma that scorched surfaces with temperatures in the thousands of degrees. For several minutes, the Shuttle would glow like the surface of the sun, after which a series of maneuvers slowed the craft to the point that it could glide safely into its relatively pedestrian landing.

Anyone designing a craft to withstand the forces and temperatures of atmospheric entry has to take into account a multitude of tradeoffs. Larger wings, for example, add weight but also generate more lift. Quicker deceleration achieved by a larger wing would also mean less heat, which would allow for a thinner heat shield.

Under the Second Generation Reusable Launch Vehicle program in the early 2000s, NASA was using various software to analyze spacecraft designs it and its contractors came up with. One problem was that computational fluid dynamics (CFD) software, while capable of producing high-fidelity aerodynamic and aerothermodynamic performance predictions, takes a long time. Modeling the temperatures and aerodynamics throughout the descent of a single vehicle with a CFD program “can take thousands of hours on hundreds of computers,” says David Kinney, an engineer with the Systems Analysis Office at Ames Research Center.

There were faster, simpler codes, but none that could predict both aerodynamics and heating, and each of those required a different, hand-mapped simplification of the original computer-aided design (CAD) model. “Going from the CAD geometry to engineering-level tools, there was a lot of manual work to get it into the right formats for different codes,” Kinney says. “We wanted to be able to take the geometry as the designer envisioned it and do aerodynamic and aerothermodynamic analysis all at once.”

To fill that need, he and his team created what’s now known as the Configuration-Based Aerodynamics (CBAERO) program. The software defines the shape of a vehicle within an unstructured mesh of triangles, taking advantage of existing routines for translating designs from CAD. No simplification is necessary. The resulting surface grid also translates easily to higher-fidelity CFD software.

The code was used to create an aerothermal database to guide the design of the Orion spacecraft’s heat shield. The database predicts forces and temperatures across the vehicle’s surface at a range of speeds, dynamic pressures, and angles of trajectory.

Once a trajectory is settled on, “the point where there’s the highest heating will define what kind of thermal protection system you’re going to use,” Kinney says. Duration of heating will determine how thick the heat shield needs to be.

CBAERO can also produce results in “batch mode,” automatically running results for a family of vehicles with a range of design parameters. “Folks here at NASA might run thousands of cases for parametrically different vehicles,” Kinney says. “You wouldn’t want to set each of those up by hand.”

A handful of high-fidelity CFD analyses can be imported into the program and used to anchor thousands of data points within an aerothermal database or a batch of atmospheric entry models, ensuring reliable results.

The software also has a module for aerodynamic analysis at subsonic speeds, which more recently was adapted to assist in the design of lighter-than-air vehicles, he says. “There are some specific methods we added to the lower-speed module of code to support analysis for dirigibles and the like.”

And the program includes models for the atmospheres of all the planets in the solar system except Mercury, whose atmosphere is negligible, enabling engineers to predict descents for any planetary lander.

CBAERO has come to be used by engineers across all of NASA’s field centers. Made available through software usage agreements in 2006, the program has also been used by more than 20 businesses, including just about every company building commercial space vehicles, as well as at least half a dozen Department of Defense agencies and four universities.

And it’s not just used for designing spacecraft. For example, one branch of the U.S. Air Force uses it for fighter jets, large transports, and unmanned aerial vehicles while another uses CBAERO to assess potential threats from foreign missiles and hypersonic glide vehicles.

The program is available at no cost through U.S. academic and Government-purpose releases, meaning it’s offered to academic institutions, Federal agencies, and their contractors.

It was one of two programs named NASA Software of the Year for 2014.

“CBAERO is our work horse when we have to do rapid assessment of different configurations,” says Luis Bermúdez, lead aerosciences engineer at Orbital ATK’s Space Systems Group.

He first encountered the software in 2006 when he was lead aerodynamics engineer for the Dulles, Virginia-based company’s work on Orion. Since then, he says, he has used the program on all his atmospheric entry projects. These have included an inflatable aerodynamic decelerator for the Defense Advanced Research Projects Agency’s now-defunct Rapid Eye project, which would have sent an unmanned aerial vehicle anywhere in the world within two hours via intercontinental ballistic missile, and entry systems for the commercial Cygnus spacecraft now used in resupply missions to the International Space Station. And he used it for preliminary designs for the Prometheus spacecraft Orbital proposed under NASA’s Commercial Crew Development program.

“CBAERO is one of those tools we use very often,” Bermúdez says. “The beauty is that it runs very, very fast, and it produces results within minutes.” Often, he says, after running a case, he wants to tweak a small piece of the design to optimize it. “You can do that because it runs within seconds or minutes. If you had to wait a week, it wouldn’t be feasible.”

As Kinney puts it, “You’re talking a few seconds, versus thousands of hours, on a single test case.”

While CBAERO is mainly used for preliminary design work before CFD modeling takes over to produce higher-fidelity predictions for mature designs, Bermúdez says, the fact that the program defines geometries the same way as CFD software also saves the work of recreating a model in a different format.

That said, in a letter supporting CBAERO’s nomination for Software of the Year, SpaceX noted that the program’s predictions for the performance of its Dragon spacecraft’s heat shield were so accurate that, after CFD analysis, the company didn’t change a thing.

Aerospace Corporation wrote that the program reduced the time necessary to run trajectory analyses in support of the Conventional Prompt Global Strike program from several weeks to a few days. The company went on to use CBAERO in a host of other programs.

Much has also been made of NASA and Kinney’s support for the software’s users. Aerospace company Blue Origin, in its endorsement for Software of the Year, praised Kinney’s in-person training and the program’s “truly excellent” user’s manual, adding that Kinney continued to make himself available for consultation long after the initial training.

Finally, Bermúdez says, while commercial software is routinely updated, Government programs often are not. With CBAERO, “you have a developer who continues to improve it with new capabilities and continues to eliminate bugs,” he says. “To know it’s maintained and upgraded, that’s very precious to us.”

Kinney says he’s pleased that so many have found his creation so useful. “That was really kind of the nicest thing for me about the whole Software of the Year Award, was hearing back from all these people who had such nice things to say.”

Abstract
An engineer at Ames Research Center created software called Configuration-Based Aerodynamics (CBAERO), capable of importing spacecraft models created with computer-aided design and predicting the aerodynamic and aerothermodynamic forces they would experience during reentry. The program generates results with nearly the accuracy of traditional computational fluid dynamics in far less time. Through software usage agreements, more than 20 businesses, including Dulles, Virginia-based Orbital ATK, and several Department of Defense agencies and universities use CBAERO. 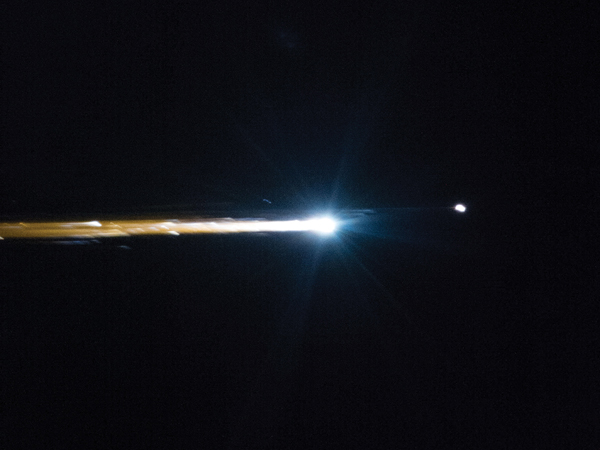 The Russian Soyuz spacecraft streaks across the night sky, generating an electrically charged, white-hot plasma trail. Traveling at hypersonic speeds, spacecraft returning to Earth experience extreme stresses, including temperatures in the thousands of degrees, as they decelerate through the planet’s atmosphere.

The Configuration-Based Aerodynamics (CBAERO) software created at Ames Research Center is the first to predict both the aerodynamics and temperatures of spacecraft atmospheric entries and allow models to be imported directly from computer-aided design programs. CBAERO is now widely used by commercial space companies, the Department of Defense, and various defense contractors.