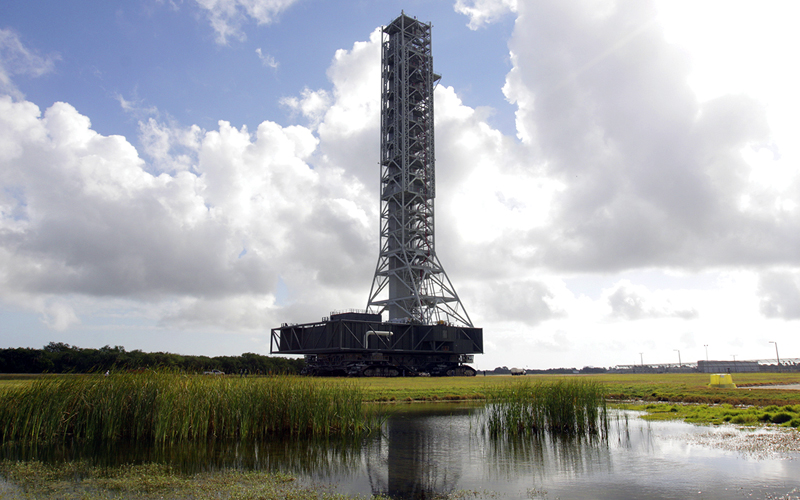 When you launch rockets, even the smallest deviation from design can create big problems—and they’re hard to fix for next time unless you know exactly what happened. The same is true for any venture where even a small malfunction can translate into major lost revenue.

That’s where data acquisition systems come in. Designed to capture and store information about the performance of and environment around a machine, they give engineers the information they need to see what happens when the machine works as designed—and when it doesn’t.

For NASA, that information is especially crucial when designing something new, like the Space Launch System (SLS), the vehicle planned to propel the first humans to Mars one day.

For instance, “on launch day, they use the data to determine when our real T-0 was. When you release all the load from the launch platform, that’s a pretty good idea of when the actual launch took place,” explains NASA’s Jeffrey Crisafulli, who manages the Launch Equipment Test Facility at the Kennedy Space Center. Thanks to sensors embedded in the launch platform, sending 200,000 samples per second, engineers can calculate that launch moment to the exact millisecond, he explains.

“Our launch control system tries to make it happen at a certain time, but you need to measure when it actually occurred,” he says. If there are any delays or differences, the engineers need to know. For one thing, there are many connecting arms, called umbilicals, in the launch platform, delivering fuel and performing other important last-minute functions, which disconnect moments before liftoff. “You don’t want any umbilicals touching the rocket again once it’s fired.”

In all, there are more than 500 sensors installed in the SLS mobile launch platform, measuring everything from temperature to strain, pressure, load, and acceleration. Sensors are installed on the umbilicals, along the 350-plus-foot tower, and in the base.

NASA needed a system that could monitor the signals from all these sensors, store the data, and simultaneously send it to the launch control center miles away. To do that, its engineer’s turned to Dewetron.

Dewetron, of Wakefield, Rhode Island, specializes in building data acquisition systems that can be used for machines in any industry, whether they’re spacecraft launch platforms or paper mills.

“We’re providing the instrument that the engineers who design and build these machines rely on to capture data,” explains Dewetron President Grant Smith. “Our instruments measure strain, pressure, acceleration—basically, if you can sense it with your body, with your senses, then typically we need to measure it. And we do.”

Dewetron has stock products it offers, but for the SLS launch platform, it had to build something more powerful. Unlike many systems that have separate signal conditioners to receive and process signals for different types of sensors, NASA wanted a single, universal signal conditioner for all the sensors. That would mean fewer parts to maintain and replace, keeping the cost down, and also make it easier to analyze the data later, explains Smith.

The sensors and signal conditioners convert the physical phenomena into a voltage, which then registers as a wave form on a graph—imagine an old-fashioned lie detector with a bunch of little pens drawing continuous lines on a piece of paper, now digitized. In order to compare the signals from the whole range of sensors, those waves need to have the same phase characteristics. That way, you can lay the different results on top of one another, without any time delay from one signal to the next.

Dewetron was able to take one of their existing signal conditioners, designed for a strain gauge, and increase its voltage input range, as well as add additional capabilities so it would be able to read the signals from all the different types of sensors on the mobile launch platform. It also increased the voltage isolation to minimize any chance of interference between sensors, which, “from an engineering point of view, was very challenging,” says Smith.

The signal from a strain gauge is measured in millivolts. NASA needed the conditioner to be sensitive enough to register those tiny signals, while also able to withstand a 300-volt surge, some 300,000 times bigger. At the same time, NASA wanted it to have a high bandwidth, able to reproduce a signal hundreds of thousands of times a second.

“It’s hard to have all three,” Smith explains. “Usually if you have a lot of isolation, that lowers the bandwidth, and vice versa. It’s a tough balancing act, and it took a lot of engineering to make it all happen.”

Dewetron also used a distributed design that wired all the sensors to just a few nodes in different locations on the mobile launch platform. These nodes used inexpensive Ethernet cables to connect back to the launch control center, dramatically reducing the amount of costly and heavy instrumentation cable.

One of the best features of the Dewetron system, Crisafulli says, is that it is very easy to use. “You buy it, you follow their operations manual, and anybody can make this work. You don’t have to be a rocket scientist to take information with a Dewetron system.”

But even more importantly, it was able to handle the tough demands of the NASA contract. “Other companies make universal signal conditioning amplifiers, but they take up a lot of space and cost a lot of money. And they’re not as robust as Dewetron’s system,” explains Crisafulli. Plus, these other systems are “probably not able to survive a launch event, which has lot of high vibrations. It’s a rough place.”

This accomplishment, ultimately, was what made the DAQP-STG signal conditioner into an attractive spinoff for customers beyond NASA. “For most of our customers that do anything related to strain gauges, it’s the ideal conditioner. It can handle nearly every kind of resistive sensor, it provides higher isolation than we ever did before, and it has a very high bandwidth. It’s a triple threat,” Smith says.

The company has taken this technology and driven it into subsequent models, too, including the HSI-STG, a signal conditioner with the same basic specifications as NASA’s DAQP-STG, except with a bandwidth of two megahertz, and the TRION-2402-MULTI module, which adds a separate 24-bit analog-to-digital converter on each channel.

United Launch Alliance has adopted the TRION-2402-MULTI modules for its Atlas and Delta launch facilities at both Cape Canaveral and Vandenburg Air Force Base, and has already launched several successful missions with this new hardware.

“It’s all built on the solid foundation of what NASA challenged us to do with the original data acquisition program for the mobile launch platform,” said Smith.

Dewetron’s customers include every major car company, from Ford to BMW to Nissan, says Smith, and not only do the companies use the Dewetron instruments to test their own cars, they use it in market research to test their competitors’ cars. Dewetron systems are also used by car parts makers, including Visteon, Bridgestone/Firestone and Siemens.

And the market extends well beyond automobiles, with customers in every industry, including companies that specialize in structural monitoring, ones that do machine testing, and a wide range of commercial aerospace companies, including Boeing, Lockheed Martin, and Bell Aerospace. “We’ve sold many thousands of these conditioners,” Grant says, sometimes in orders of 800 or more, which, at roughly a thousand dollars each, is great for the company’s bottom line.

NASA’s high standards are great for industry, he emphasized. “They have these requirements which are extraordinary, because of the nature of the work, and that pushes everybody forward to meet them. And then we, almost by accident, invent things that have other, unanticipated applications here on Earth.”

Abstract
Under contract with Kennedy Space Center, Wakefield, Rhode Island-based Dewetron delivered a powerful system to monitor performance on the Space Launch System mobile launch platform. The easy-to- use system captures data with one universal signal conditioner—allowing easy analysis across multiple signals—and is now a popular part of Dewetron_s product line. Updated versions have sold to aerospace companies and car companies from Ford to BMW, as well as many other industries. 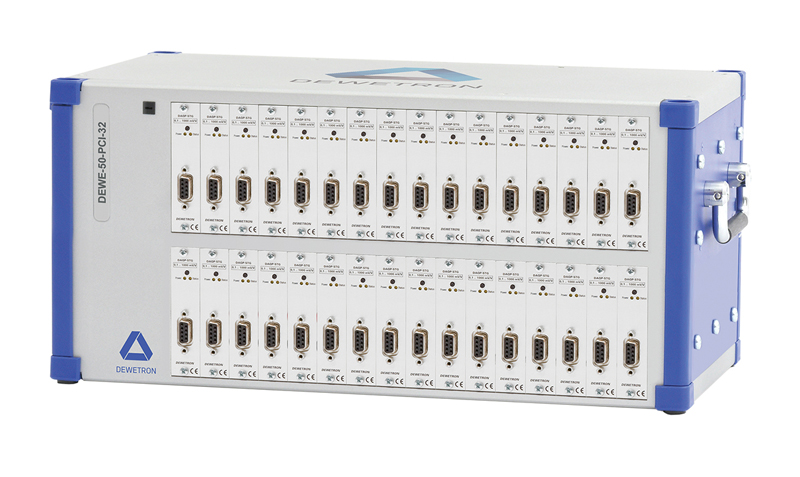 Sensors measuring anything from strain to temperature, pressure, load, or acceleration plug into the Dewetron system, which records how each performs so engineers can analyze the data later. Many systems have separate systems for different kinds of sensors, but at NASA’s request, Dewetron built a machine that could read every kind of sensor.

The mobile launch platform for the Space Launch System (SLS) travels to the launch site at NASA’s Kennedy Space Center in Florida. One of the important roles of the Dewetron data acquisition system installed throughout the structure is to capture information on important details like whether the platform base is stable and balanced before launch.