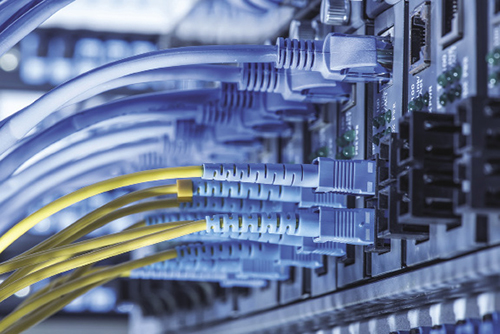 The Orion crew capsule may resemble its Apollo ancestor on the surface, but all of its internal systems reflect nearly half a century of development since NASA’s Moon missions. Among these is a 21st-century data system capable of quickly transmitting massive amounts of data throughout the spacecraft with hardware that’s as light and durable as possible.

An integrated data system runs throughout Orion, says Ron Deppen, a mechanical engineer with Lockheed Martin Space Systems Company, a prime contractor for Orion. “This is the communication link between all of the electronics in the vehicle. It’s not only in the crew module; it goes into the service module as well.”

From NASA’s earliest missions through the Space Shuttle era, crew vehicles relied on separate series of data networks connected via bundles of wires resembling a “rat’s nest,” says Clint Baggerman, Command and Data Handling system manager at Johnson Space Center. “You’d have a small network in one place connecting several boxes together and then a second network in a different part of the vehicle connected to the first, and a third network in another part. If the third network had to communicate with the first one, you’d have to wire those together, too.”

Moving forward, NASA needed an upgrade and decided to go with a time-triggered, one-gigabit Ethernet network, in which tasks are timed and scheduled so as to eliminate delays in relaying commands. In the new design, “everything plugs into the master network, so anything can communicate with anything else at the lowest possible mass, with the fewest possible connections,” Baggerman says.

For its new network, Johnson wanted lighter, smaller connectors that could transmit large amounts of data and survive the harsh conditions of space travel, criteria that existing connectors couldn’t meet. The connectors used on other networks were either too big and bulky or couldn’t provide the performance the Agency needed.

“We went out to a handful of companies and said, OK, who’s got the best design?” Baggerman says. Johnson worked with both Lockheed and Honeywell Aerospace, the contractor responsible for Orion’s flight-management systems, to review submissions from connector manufacturers.

NASA also wanted connectors with a higher impedance rating than the standard for communication networks, which would allow more data to be transmitted at lower voltages, so they had to be specially built, Deppen says. “Of course, the connectors had to meet the very high environmental requirements we have for the Orion program,” including the ability to withstand takeoff, aquatic landings, and the violent jettisoning of the crew if the launch is aborted.

Five companies responded to NASA’s call for submissions, but one quickly pulled ahead of the rest.

Smiths Connectors, a part of the Interconnect division of London-based Smiths Group PLC, is located in Costa Mesa, California. The branch specializes in electronic components for harsh environments, designed to withstand the high vibration and extreme temperature fluctuations faced by spacecraft and aircraft alike, says Mike Carlson, global market vice president for space and oil and gas for the company. While another company also made it through the first round of review, the ruggedized D-sub miniature connectors provided by Smiths Connectors proved most capable of meeting NASA’s requirements.

“They chose ours for its mechanical ruggedness, its electromagnetic shielding capability, and its electrical performance,” Carlson says. The initial interactions with NASA took place in 2010, and over the next five years the company worked under a subcontract to Lockheed to design and develop connectors qualified for Orion’s first crewed flight, scheduled for 2018.

As expected, the connectors made it possible for Orion’s data system to transmit more data than the network used in the Space Shuttle era while also eliminating extraneous signal noise, which can cause data loss, especially at the low voltage levels the system is designed for. Orion’s first test flight in December 2014 utilized the connectors, which performed perfectly, Baggerman says. “We’ve tested them on Exploration Flight Test 1 so far, and they worked flawlessly. With any luck, they got the design right the first time through.”

Before the design for Orion’s connectors was even finalized, though, Smiths Connectors leveraged the technological advances it had made through its NASA work into a broader offering for more commercial applications.

With NASA now a satisfied customer, Smiths Connectors made some additional modifications and released the High-Speed Ruggedized D-Sub connector to industry in July 2015. Carlson says the company is courting customers in other demanding fields, touting the connectors’ ability to endure harsh environments and quickly transmit large amounts of data.

“The real crossover for this product line is that it’s also used in Ethernet backbones,” he says. “We have found applications for it in military aerospace and the commercial aviation market. That’s the first appeal for it.”

In aviation, the industry is working with “a more distributed architecture, putting sensing equipment closer to where an operation takes place—near the wings or near the engine, versus just in the fuselage—where it sees very high levels of vibration,” Carlson explains.

The oil and gas industry has similar needs, as its equipment has to withstand the high pressures and vibration of drilling into hard ground. There’s also growing interest from rail companies, whose entertainment and communication systems on heavily vibrating trains use massive amounts of data.

“The trend is that all markets are requiring higher levels of vibration, and that’s why it’s gaining mass market appeal,” Carlson says.

The High-Speed Ruggedized D-Sub connectors have proven capable of supporting data networks up to and above 500 gigabits, he says.

“Space remains a key market for Smiths Connectors, as it provides the opportunity to create new solutions for extreme environments and technological challenges and then to develop those technologies into product offerings for multiple other markets, helping to continue the growth of our company,” Carlson says.

Abstract
The Orion crew capsule may resemble its Apollo ancestor on the surface, but its internal systems reflect nearly half a century of development. Among these is a 21st-century data system capable of quickly transmitting massive amounts of data, overseen by Johnson Space Center and designed by Smiths Connectors, based in Costa Mesa, California. The company has commercialized data connectors it designed for NASA in other demanding applications, such as in the aviation and oil and gas exploration markets. 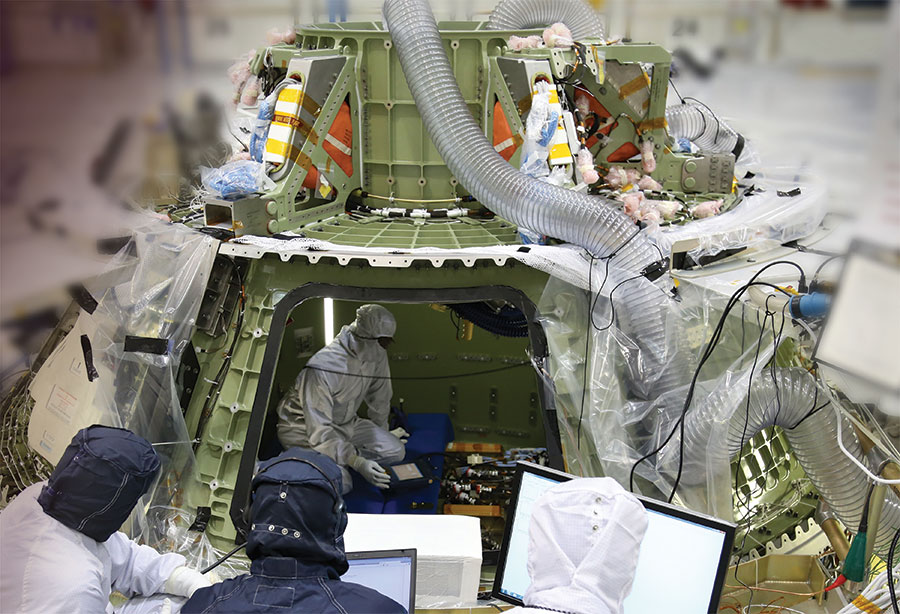 This 2013 test of Orion’s avionics systems shows some of the capsule’s complex wiring. Smith’s Connectors developed rugged, reliable devices to move large amounts of data around the spacecraft, even in extreme environments.

The company says its NASA-improved connectors’ primary spinoff applications are in Ethernet networks used in military, aerospace, and commercial aviation markets. It also sells spinoff products in the oil and gas industry.