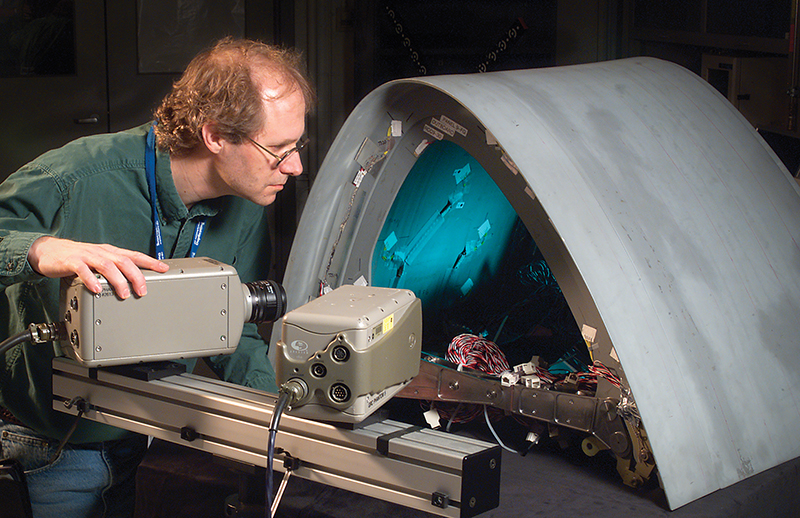 When something goes wrong in space, the results can be tragic. NASA takes the responsibility of testing to understand past accidents and prevent future ones seriously—and one of the tools it helped develop is used to make cars and airplanes safer, and much more.

On February 1, 2003, just minutes before Space Shuttle Columbia was due to touch down, the spacecraft suffered a catastrophic failure—all because of a piece of foam that broke off and knocked into the leading edge of the wing during launch 17 days earlier.

NASA spent months investigating the incident to get the complete picture of what went wrong that day, and Glenn Research Center’s Matthew Melis, a ballistics expert who was responsible for part of the investigation, explains that much of the problem came down to a basic tenet of physics: “It’s not just how much something weighs, it’s how fast it’s moving.”

The foam was feather-light, and the reinforced carbon-carbon composite on the leading edge was “tough as nails,” Melis explains, but the kinetic energy of the moving foam was powerful enough to cause critical damage to the Shuttle’s thermal protection system.

Melis and the other investigators went to the lab to recreate the conditions of the accident and studied it carefully, including measuring the foam impact using stereo photogrammetry. The technique uses two synchronized cameras to film an impact, and then software to analyze how the materials deform during the event. Those movements translate to stress and strain.

“It’s like using your two eyes to know where something is in 3D space,” explains John Tyson, president of the company that built the stereo photogrammetry system NASA used. “With two cameras, we can precisely measure if something comes closer to you or goes further away, and can estimate the distances it’s traveling.”

The Columbia investigation team was able to not only show what happened to the reinforced carbon-carbon leading edge when the foam hit, but also predict what would happen in other circumstances if debris hit the Shuttle. They coordinated with the Debris Assessment Team at Johnson Space Center to come up with a list of different materials that might come off the Shuttle exterior, from foam to ice to tile putty, and what might happen if it hit.

Using stereo photogrammetry, computer models, and other tools, they tested to see which impacts could cause critical damage and then recommended changes to the Shuttle structure to decrease the risk. “So if we said, ‘That’s too big a piece of foam,’ they’d make changes: make that location of foam thinner or eliminate the piece altogether,” Melis says. In one case, engineers had to increase the thickness of two windows by an eighth of an inch to ensure they wouldn’t fail if they were struck by foam debris.

Stereo photogrammetry was not a new technique in 2003, when the Columbia investigation began, Melis says. In fact, NASA had already been using it for a variety of purposes—but the existing technology wasn’t going to cut it for the ballistics investigation.

ARAMIS, the photogrammetry software NASA uses, was able to analyze video of about 15 frames per second (fps). “That’s relatively quick,” says Melis. “But it didn’t have the ability to work at 30,000 fps,” which is the speed needed for “a ballistic event on par with what Columbia experienced.”

Melis began talking with Philadelphia-based Trilion Quality Systems, the sole U.S. distributor of the German-developed ARAMIS, asking them, “What can you guys do to get us hooked up to high speed?” The timeline was short, because NASA was eager to get answers and make the changes needed to return the Shuttle safely to flight.

Trilion set up shop at Glenn and got started. “It was a lot of little issues,” Tyson recalls. For example, “we had to get the high-speed camera companies to modify their software so it worked with our software.”

“We spent about two months getting it working,” Tyson says, including initially building intermediary software, “and then we kept fine-tuning it.” Since then, Trilion has continued to improve and streamline its high-speed system, including coordinating with the camera software developers and the company that developed ARAMIS so that the two components work together seamlessly.

Now, Tyson says, high-speed ARAMIS systems represent about 20 percent of Trilion’s business, and “it all started with NASA Glenn.”

One of the most important uses of high-speed stereo photogrammetry, or as Trilion calls its system, high-speed digital image correlation, is for materials testing. “In all industries, you take a piece of a material and you stick it in a machine that pulls it apart, and when you pull it apart you understand how it stretches and fails,” Tyson explains.

To measure that very precisely, engineers typically would place strain gauges and other sensors directly on the surface during the testing. However, those sensors can only provide discrete measurements at a finite set of points. The results are put into computer models that can extrapolate the impact across the sample as a whole, but the results are only as good as the computer models and can miss something entirely if a sensor is not placed at the right spot. In contrast, using stereo photogrammetry, the software can take measurements across the entire surface all at once. “Instead of looking at a single point, you look at 10,000 points and get a much better understanding of what’s really occurring,” Tyson says.

Those measurements can be used to verify the computer model used with the physical sensors, or it can replace them entirely.

By understanding the materials better, Tyson says, manufacturers are able to improve performance and safety. For example, “years ago, cars were all just made of steel,” Tyson says. “Today there might be 50 different materials inside your car, each doing something different. That’s increased the safety of vehicles significantly, just by changing the materials.”

Trilion sells its systems to a wide range of industries, from car companies to orthopedic implant manufacturers to military contractors.

When Adidas wanted to design a new high-performance running shoe, it used the high-speed ARAMIS system to analyze Olympic marathoners’ feet as they hit the ground at full speed—first in bare feet and then in shoes. “One of the things they saw was that a normal shoe constrains the ball of your foot and your Achilles tendon—as you’re running, your shoe is pushing against that tendon,” Tyson says. “So they made a v-shaped opening at the back of their shoe so the tendon is free to move.”

The shoe company also tested different materials to choose one that would allow the ball of the foot to expand with impact. “They studied the actual foot and then designed a shoe that would match the true motions of the athletes.”

After the wing broke at the root during simulated flying to test at 120 percent strain, Boeing used Trilion’s systems to confirm its Dreamliner 787 was structurally sound. Ford used the system to test the materials for its F-150 trucks when it wanted to switch the body from steel to aluminum—the lighter material saved money and increased fuel efficiency, but the company wanted to ensure it wouldn’t compromise the toughness of its signature trucks.

In addition to providing detailed and accurate measurements across a surface, Tyson says, the high-speed ARAMIS system saves money. A strain gauge might cost $1,500, he explains, which is less than the $100,000 startup cost of an ARAMIS system, including the software, cameras, and setup. But over time, it ends up costing less; both in the labor costs of running the system and the cost of sensors. According to an estimate from Boeing, he says, they found an ARAMIS was 10 times cheaper than buying and replacing sensors, and required a fiftieth of the labor.

It has sometimes been challenging to convince a new customer that a pair of cameras can measure tiny movements as accurately as sensors, Tyson says, but that’s where the company’s NASA bona fides have been a big help.

“There’s no question that that’s a big gold star on what we do: that we helped the Space Shuttle fly again.”

Abstract
After Space Shuttle Columbia suffered a catastrophic failure, NASA spent months investigating what went wrong and how to prevent it ever happening again. One of the tools it needed, a high-speed stereo photogrammetry system, didn’t exist, so Glenn Research Center worked closely with Philadelphia-based Trilion Quality Systems to take existing ARAMIS software and adapt it to work with high-speed cameras. The resulting product, now commercialized, helps make cars and airplanes safer, and much more. 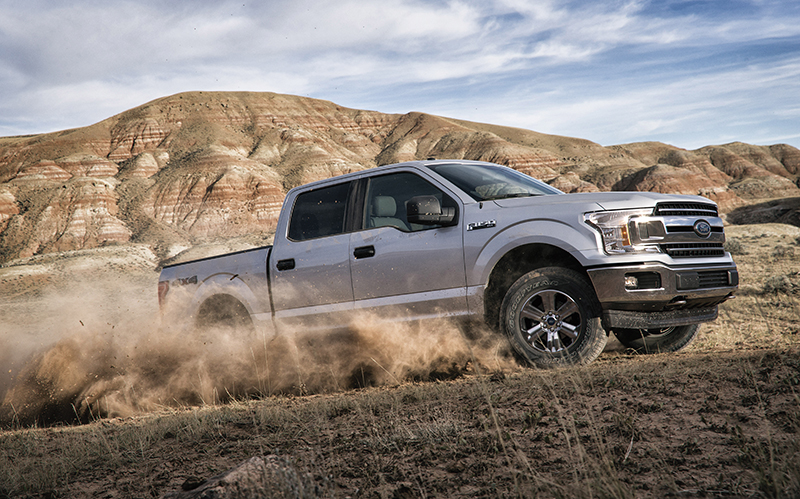 Ford used Trilon’s impact-testing system when it wanted to change the F-150 truck body from steel to aluminum. The lighter material saved on cost and fuel, but Ford wanted to ensure it wouldn’t sacrifice toughness. 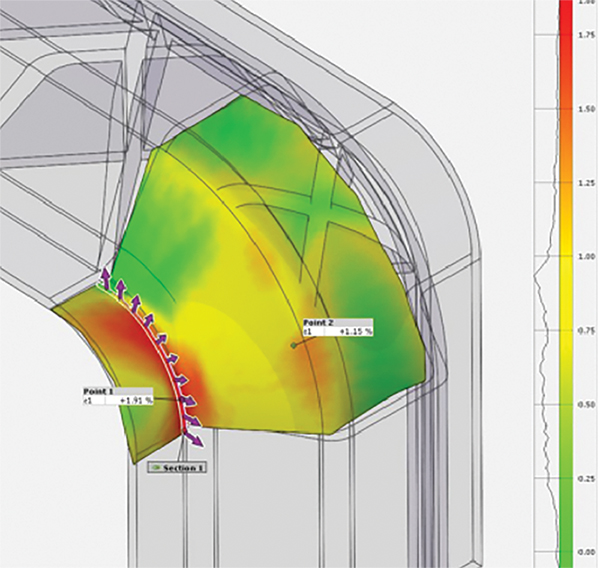 Trilion Quality Systems worked with Glenn to adapt existing stereo photogrammetry software to work with high-speed cameras. Now the company sells the package widely, and it is used to analyze stress and strain in everything from knee implants to running shoes and more.

To investigate the tragic 2003 Space Shuttle Columbia accident and understand how to prevent a future one, a team at Glenn Research Center used high-speed cameras and stereo photogrammetry software to analyze impact. The system, used here in 2004 to test a fiberglass surface on Space Shuttle Enterprise, had to be custom-built to meet NASA’s needs.