Not all the research on the space station happens on the inside. A good portion of the investigations take advantage of the orbiting outpost’s perch some 250 miles above Earth’s surface, testing how materials perform outside our atmosphere or just taking in the view. As the commercial space industry grows, more and more companies need that platform—and a new module that deployed in 2016 is expanding the options for all.

NASA has been conducting external space research nearly as long as it’s been sending objects into space. George Nelson, who manages the International Space Station (ISS) Technology and Science Research Office at Johnson Space Center, likens the method to how road builders test materials: “They learn just by putting the materials in the relevant environment,” he says, “and look to see how they hold up to road traffic, heat, cold, and so on.”

In the same way, new materials or materials that have never been used in space are placed on a research platform on the outside of a spacecraft for a given period of time and then observed for the effects from radiation, vacuum, and extreme heat or cold. Electrical and other components are also tested to ensure the wiring and other features are rugged enough to survive harsh radiation.

And external platforms on the space station are a good perch for Earth-, sun-, and star-observing instruments, which, unlike on a satellite, can be replaced with different instruments or, in some cases, brought back to the ground and repaired.

Airbus DS Space Systems Inc. has plenty of experience building external payload platforms. Originally established in Washington, DC, in 1973, the company moved to Houston to support the Shuttle program in the late 1980s, where it built much of its payload platform experience working for NASA. “We have a long history of external carriers going up in Shuttles,” recalls Carl Kuehnel, technical programs director for Airbus DS. “We have two already attached to ISS,” he adds, External Stowage Platforms 2 and 3.

Their latest external platform is also designed to attach to the space station, but this time the money didn’t come from NASA.

“This was basically conceptualized in 2012, between our company and NanoRacks. We were contracted to design and develop it,” Kuehnel says. NanoRacks did have a Space Act Agreement with NASA, which provided some resources, but the project was funded, and is now being operated, commercially.

The new NanoRacks External Platform, or NREP, which became operational in August 2016, works a little differently than its predecessors. In particular, the platform was small enough to be assembled inside the space station, sent through an airlock, and installed using a robotic arm controlled from the ground. After the test period ends, the platform will be brought back inside the station the same way, to gather test samples and load the next batch.

That’s a huge cost savings, because it means astronauts don’t need to suit up for spacewalks to set up or retrieve the device. “We’re looking at 15-week-type missions,” Kuehnel says, adding they “expect to have two airlock cycles a year.”

NanoRacks manages the platform and seeks out clients, but Airbus DS collaborates to help with interface testing and development of the payloads. That’s an important part of the process, because the external platform is much more than a spot to park material, Kuehnel says. “NREP is quite a sophisticated unit. It’s able to communicate with the payloads, get data from them, command them, stream data back,” all using the external Wi-Fi installed on the ISS—the first platform to use that Wi-Fi.

NREP has nine slots, each 10 by 10 by 40 centimeters, and they can be configured to handle payloads of different combinations and sizes.

The first set of commercial payloads was brought back inside in spring of 2017, and Kuehnel said another three would be ready for the second cycle.

“I think this size payload, people are starting to understand this is an easy, cost-effective way to get up onto orbit and be operated in the outer environment.”

Abstract
Many ISS investigations test how materials perform outside our atmosphere or use the vantage point for Earth, sun, and star observations. Houston-based Airbus DS Space Systems has built external platforms for NASA, working with Johnson Space Center, to enable that kind of research, and most recently used that expertise to build a commercial platform, which will allow private companies to test materials and mount sensors in space. 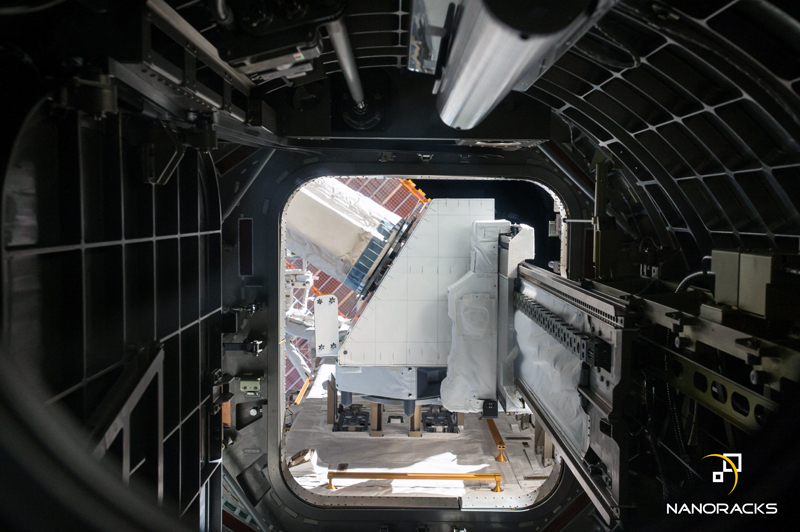 This external payload platform, built by Airbus DS Space Systems Inc., is small enough to be assembled on the ISS and be sent in and out through an airlock.

Once outside the space station, the platform can be moved and placed by a robotic arm. The maneuverability makes it less expensive and easier than ever to send samples for testing or mount imagers in space.