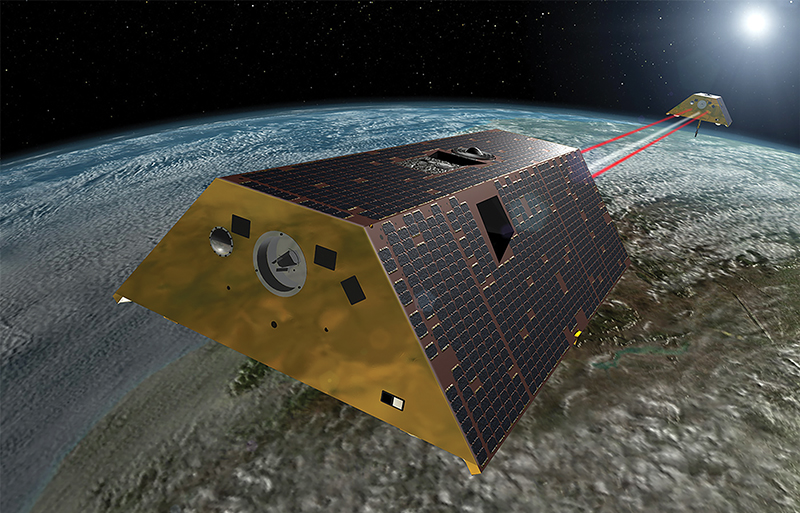 Devices for testing electronics haven’t changed much in decades, and this presents an inconvenience not just for the engineers using them but for the electronics industry, says Daniel Shaddock, CEO of the startup Liquid Instruments. He thinks clunky equipment may also drive down recruiting. “Kids grow up using iPads, and then they get into the lab in college and it’s like the Soviet era,” Shaddock says, describing ungainly user interfaces with multitudes of knobs and buttons. “They get turned off and move on to other things.”

So his company set out to improve test and measurement equipment and ended up with its Moku:Lab, a device that can reconfigure itself to be several different instruments and even use an iPad as its interface.

Shaddock started his career as a postdoctoral researcher at NASA’s Jet Propulsion Laboratory (JPL) in 2002, working on the Laser Interferometer Space Antenna (LISA), a joint project between NASA and the European Space Agency. Shortly, he says, he was made the project’s interferometer architect.

LISA’s task was daunting: three spacecraft more than 3 million miles apart were to detect gravitational waves that might affect their positions relative to each other by distances smaller than the width of the atoms that made up their instruments. To do this, they would have to correct for any extraneous “noise,” including more than 30,000 miles of drift among them annually. “When I first heard about it, I thought it was crazy,” Shaddock says. “Nobody could do this.”

But it wasn’t impossible. NASA substantially reduced the scope of its involvement in LISA in 2011, but the European Space Agency continues to work on it and hopes it will launch in the early 2030s. (In September of 2015, meanwhile, the National Science Foundation’s ground-based Laser Interferometer Gravitational-Wave Observatory, using similar technology, became the first instrument to detect gravitational waves.)

At the heart of LISA’s instrumentation is a phasemeter that measures the difference in phase of two incoming light signals down to a millionth of a wavelength. A phasemeter is also an instrument used in electronics testing and measurement and one of the instruments Moku:Lab can transform into.

After funding for LISA was cut, a number of the project’s engineers were assigned to the Gravity Recovery and Climate Experiment (GRACE) Follow-On mission, also run out of JPL, which uses a similar technique to map Earth’s gravity field. Shaddock was among them, although he moved back to Australia. There, through a partnership between NASA and the newly formed Australian Space Research Program, he led a team of about a dozen researchers at the Australian National University’s Centre for Gravitational Physics, adapting the LISA phasemeter’s field-programmable gate array (FPGA) processor for the GRACE Follow-On.

The Australian space program, however, was short-lived and ended in 2014. “I was left with all these very talented engineers,” Shaddock recalls. “We looked at the technology we had and thought, ‘Is this useful to anyone else?’”

Shaddock’s team had gained extensive expertise in signal processing and chip programming under the GRACE Follow-On, and many of them under LISA as well, but the turning point came when one team member figured out how to remotely make an FPGA reconfigure itself for different purposes. FPGAs are computer chips that are not preprogrammed but designed to be configured by the customer. “She could run an entire experiment from her office,” Shaddock says. “Eventually, she could run it from bed.”

With funding from a couple of venture capital firms, the team founded Liquid Instruments, based in Canberra, Australia, and set about building a commercial product. Shaddock says the switch from academia to the commercial market was a challenge, but experience in designing instruments to survive in space went a long way to help the engineers develop a device that was small and sturdy.

The university exchanged the intellectual property that went into the devices for a small amount of company equity. The company promised investors to get a product to market within a year and sell an initial run of 60 devices, which it did in 2016—even though, Shaddock says, “we found out later they didn’t think we had a chance” of meeting the deadline.

The initial Moku:Lab devices could reconfigure into three instruments: an oscilloscope, a spectrum analyzer, and a waveform generator. Each of these devices would normally require its own circuit board and programming.

Because Moku:Lab’s hardware is reconfigurable, though, as the company develops configurations for more instruments, users can simply download them. And the company offers them for free, to the annoyance of some investors, Shaddock says. “But the benefit to us is that customers love us so much they recommend us to others, rather than us trying to nickel-and-dime them.”

Moku:Lab can now switch between eight common electronics test and measurement instruments, including a phasemeter, a data logger, and a lock-in amplifier, and the company hopes to make it a 20-instrument device by the end of 2018.

Shaddock recalls a recent technology event he attended, where he met a competitor who sells lock-in amplifiers for around $50,000. “And we just gave one away for free for our $5,000 device,” he says. “Those guys looked kind of worried.”

“It’s like the difference between a typewriter and a computer,” Shaddock says, comparing his company’s all-in-one device to its predecessors.

By combining several expensive instruments in one affordable package, Moku:Lab offers enormous cost savings, but Shaddock notes that it also saves the time it would take to change out instruments and to install the software to support them. “We want to almost be like an appliance, where you just plug it in and turn it on,” he says. A slick, iPad-based user interface and Wi-Fi capability are also advantages.

The company has identified four target markets, the first being “people like us,” Shaddock says. These are engineers and physicists in research and development divisions, federally funded labs, and universities.

The next intended market is education, where Shaddock, a physics professor himself, hopes to help attract the interest of more students and enrich science, technology, engineering, and math curricula around the world. He envisions high school students using the device for debugging and trouble-shooting electronics, and the company is developing college lab experiments, which it plans to offer on its website for free.

In the industrial market, electronics manufacturers use various devices to test and measure products coming off the line, with workers switching between instruments at each workstation. Shaddock imagines a Moku:Lab at each of hundreds of workstations instead, all carrying out the functions of several instruments and recording test results at the commands of a central computer.

Finally, Liquid Instruments would like to get back into the aerospace industry, where remote testing is often necessary and any weight savings from reducing the number of devices on a spacecraft would be highly prized.

Having sold out its initial product run, the company found a larger manufacturer and hoped to sell about 600 new and improved units in 2017 and then 6,000 in 2018.

Shaddock told investors he expects tens of millions of dollars in revenue over the next few years. Given that the company is threatening to disrupt an industry that represents about $10 billion in annual sales, he has reason to be optimistic. “And if we hit $1 billion,” he says half-jokingly, “I’m going to come back and fund LISA myself.”

Abstract
Researchers at Australian National University who worked on the Jet Propulsion Laboratory’s (JPL) Gravity Recovery and Climate Experiment under an agreement with the Australian government, some of whom had also worked on the Laser Interferometer Space Antenna for JPL, used their expertise in signal processing and chip programming to build a device that can reconfigure itself into eight common electronics test and measurement instruments. Configurations for new instruments are available via download to the Moku:Lab as Canberra, Australia-based Liquid Instruments develops them. 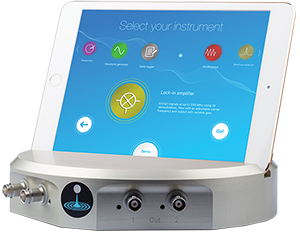 The Moku:Lab replaces stacks of electronics test and measurement instruments with a single, small device that uses an iPad for its user-friendly interface. The device reconfigures its computer chip to essentially transform itself from one instrument to another.

The engineers at Liquid Instruments gained much of their experience designing instruments for the Jet Propulsion Laboratory’s Gravity Recovery and Climate Experiment Follow-On mission, which maps Earth’s gravity field by using a laser interferometer to register tiny changes in the distance between two orbiting satellites.