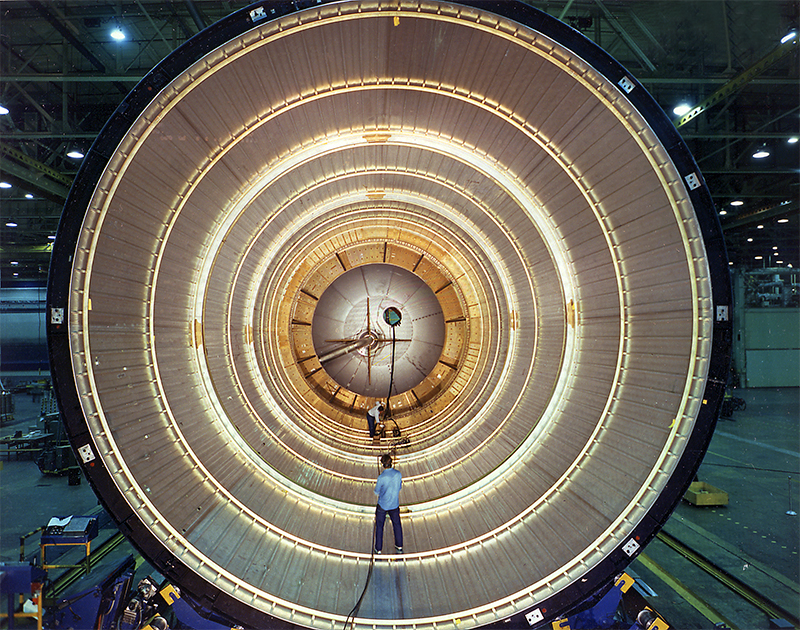 When people feel sick, they can just grab a drugstore thermometer and pop it in their mouth. But it’s a different story for engineers looking to get an accurate read on the temperature of rocket fuel, which must be kept at hundreds of degrees below zero.

Why so cold for something that’s eventually going to launch in a fiery explosion? NASA needs to keep the fuel, which consists of hydrogen and oxygen, in liquid form because it takes up less space than gas and is easier to contain—and that requires keeping both substances well below typical Earth ambient temperatures.

The Space Agency has worked out systems to cool, and keep cool, fuel in storage tanks and along the pipelines that transport it to the rockets. But it’s important to monitor that temperature constantly, because with warm air all around, it’s not hard for the fuel to start heating up.

“There’s always going to be some kind of boil-off, but the idea is to maintain those temperatures to the optimal range so you don’t get gas mixed with liquid,” explains Jose Perotti, who was an instrumentation engineer for the Space Shuttle Program at Kennedy Space Center.

Once the fuel starts warming up, gas bubbles can form, which degrades the flow along the pipeline, Perotti says. “We wanted to read in fractions of degrees at those lower temperatures to better know whether the quality of the fluid was good.”

To build the sensors for the Space Shuttle fuel system, Kennedy turned to Scientific Instruments Inc., the West Palm Beach, Florida-based company it had been relying on for temperature sensors since the Apollo era. “Kennedy was one of the first customers we ever had as a company,” explains Austin Capers, who oversees cryogenic thermometry sales for the company.

“They ended up using our sensors on the oxygen tanks during the Apollo missions, which was the biggest first step that our founders took in this business, what got the company to the next level.”

The sensors Scientific Instruments had been providing more recently, based on platinum resistance thermometers, had a problem, Perotti says. “At the temperatures we were trying to measure, the response signal from the sensor was fairly low. It was hard to obtain the resolution at these lower temperatures needed for cryogenic operations.”

Scientific Instruments already had a better technology, using silicon diode sensors, but the instruments needed some modifications to work for NASA.

“They are semiconductor-based sensors that are very, very responsive to the lower temperature we need to measure,” Perotti says. “Scientific Instruments worked to characterize those silicon diodes and package them in the format and fit form required under NASA specifications for applications in the Space Shuttle, and also to develop an associated signal conditioner to translate into signals we could use.”

Among other modifications, Capers says, the sensor needed a more robust package, because “it needs to withstand harsher conditions.” NASA’s specifications also included accuracy levels, probe lengths, and that the probes could withstand a certain pressure rating, he explains. To achieve all that, Scientific Instruments designed a hermetically sealed stainless-steel enclosure, with the sensor mounted inside at one end and a connector on the exterior.

The probe is either directly immersed in the liquid or mounted in a thermowell, which is a tube closed at one end that is placed inside the fluid stream. To get a temperature reading, current is supplied to the probe, typically 10 microamps or 100 microamps, and the diode sends back a voltage reading, which is correlated to a temperature.

“After we made it, NASA engineers tested and qualified it,” Capers says. “It’s a product we still make for them today.”

One of the big advantages of silicon diode sensors over their predecessors is that they’re interchangeable: if one fails, you can just take it out and replace it with another one. In contrast, many high-tech temperature sensors require individual calibration, so it can take a lot more effort to get them up and running.

The sensors are also accurate down to a tenth of a degree, over an extremely wide temperature range. While a typical thermometer at a drug store has a temperature range of around 90–105 °F, Capers says, “our silicon diodes work well all the way down to 1.5 Kelvin, or roughly -460 °F, and the maximum temperature they can read is 450 Kelvin, equivalent to

NASA continues to use the silicon diode sensors for its fuel systems and has also used them on other projects, including the Hubble Space Telescope. And the Space Agency isn’t the only buyer, Capers says.

“We sell a similar model today to several private space exploration companies. It’s a similar design, similar concept,” he says, though “the actual design of the probe is a little different.” Like NASA, these private companies are also using the sensors for their liquid oxygen and liquid hydrogen tanks, as well as to measure inlet temperatures from fuel pumps. In the mid-1990s, Scientific Instruments also supplied silicon diodes for the production of MRI magnets.

Although Scientific Instruments is under contract to only produce sensor packages with the exact NASA specifications for the Space Agency, these other sensors have benefited from the development and quality control testing done at NASA—and the connection also helps during sales pitches.

“Absolutely,” Capers says. “I mention a lot how we were the sole source provider of these temperature transducers during the entire Shuttle program.”

Abstract
It’s important to keep close track of rocket fuel temperatures, which must remain hundreds of degrees below zero. NASA uses special sensors to get the extremely accurate reads it needs at those low temperatures, and West Palm Beach, Florida-based Scientific Instruments Inc. has been supplying them to Kennedy Space Center since the Apollo program. A more recent version, first used and improved for the Space Shuttle program, is now sold to private space companies and the medical industry. 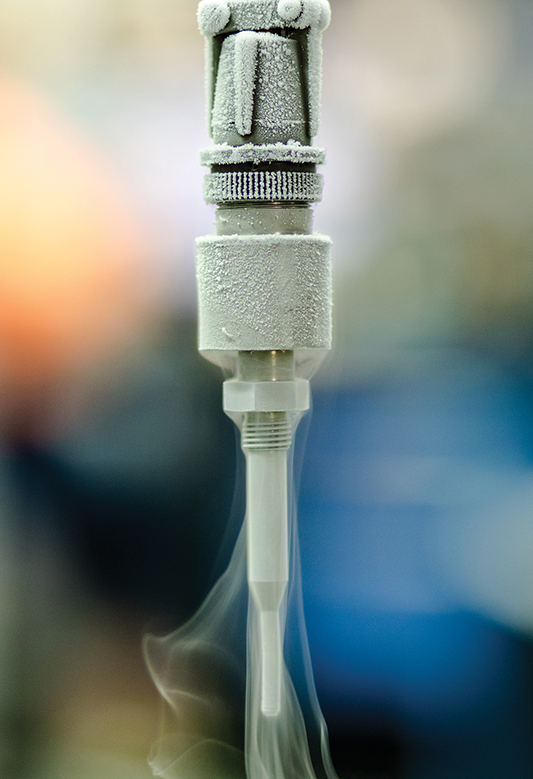 Scientific Instruments Inc. has been making temperature sensors for NASA since the Apollo era. For the Shuttle program, it improved an existing silicon diode sensor, which it now sells to private aerospace companies and the medical industry.

Before a Space Shuttle launch, this external fuel tank would be filled with liquid fuel, which must be kept at hundreds of degrees below zero. NASA used special sensors to monitor the temperature in fractions of degrees, to ensure the fuel didn’t start to warm up and form gas bubbles.