Images taken from high in the sky can offer clues to how well a plant is growing and whether its water needs are being met. The key is in filtering the light—infrared wavelengths can reveal chlorophyll content, for example, which dips when plants are starting to fail.

NASA helped develop a light filter that could be tuned to different wavelengths with a flip of a switch, hoping it could be useful on its many Earth-observing missions, but the result turned out to have wide-ranging applications far beyond plant stress, from nuclear fusion to brain research.

The work began in the early 1990s, explains Meadowlark Optics Chairman Tom Baur. “We were trying to develop a filter that passes one color of light, and we wanted to be able to adjust the color without any mechanical motions.” That way, a single remotely controlled instrument could be used to observe any portion of the light spectrum, instead of needing to swap out filters or have separate devices for different wavelengths.

They came up with a device that uses a thin layer of liquid crystal—on the order of 5 or 10 microns thick—between two windows with a transparent conductive coating. The electricity varies the alignment of the liquid molecules, which allows different wavelengths of light to pass through when the device is used between polarizers.

“The polarization change is dependent on the voltage,” Baur explains, and the result is that “without any mechanics you can change the optical performance electrically.”

The Air Force intended to use the filters to study magnetic fields—and the magnetic storms they cause—on the sun, which can have a powerful impact on electronics and communications systems on Earth. “It’s estimated that once every 100 or 200 years, a magnetic storm on the sun is strong enough that it would knock out all the electric transformers on Earth,” Baur says. “So, clearly, being able to predict these storms is important, and tunable filters are one tool for studying them.”

The tunable filters are useful because to study magnetic fields on the sun, researchers look at different heights in its atmosphere, and “different colors of light are emitted at different altitudes.”

“For example, you can use tunable filters to look at water stress in plants,” Baur says, “so if you’re in a place where irrigation is being used, if you look at the crop in different colors of light you can tell whether or not those plants are thirsty.”

Liquid crystal variable retarders have resulted in some $5 million in business for the company. The Frederick, Colorado-based company was also honored with the Photonics Circle of Excellence award from Photonics Spectra magazine for the innovation.

The innovation has since proliferated throughout the optics industry, Baur says. “They are now sold by a number of companies—but we were the first.”

Although the tunable filters were initially created for astronomers and remote sensing, it was quickly clear that these devices would have far wider applications. “It’s like saying, ‘Well, we invented a lens, what category would you put that in?’ Could be used in a microscope, telescope, a laser system,” Baur says.

Currently, the largest market Meadowlark has for liquid crystal variable retarders is in biology research. “They are a real handy tool if you want to work with really tiny little things. It’s a non-mechanical way of grabbing hold of tiny things and moving them about,” Baur explains.

He’s talking about optical tweezers, which are essentially a laser fed through a microscope to create a highly focused beam, which can attract and hold tiny particles with a slight electrical charge. When the researcher moves this optical trap, the particle goes with it. Researchers direct the laser through thousands of liquid crystal variable retarders built into a tool called a spatial light modulator.

Meadowlark has an extensive line of spatial light modulators, but all work on basically the same principle: the liquid crystal variable retarders are built into an array, maybe 1,000 by 1,000, and each one can be manipulated individually with a different electric voltage, which allows the operator to shape the light however it’s needed. For optical tweezers, the laser beams can be shaped and split “to create holographic light patterns that can actually trap a living cell and move it around,” Baur says.

Spatial light modulators can also create light patterns to stimulate brain tissue in very precise ways to study how the brain works. Another spatial light modulator the company built is installed in Livermore National Laboratory’s National Ignition Facility, the world’s largest laser system. To ensure that the incredibly powerful laser only hits exactly where it is supposed to, the lab needed a spatial light modulator to pattern the beam before it is amplified. That allowed the researchers to use much higher power levels, because they knew no sensitive instruments would be zapped as collateral damage.

“We won an R&D 100 award for that spatial light modulator, about three or four years ago,” Baur recalls.

Spatial light modulators are also used in optical communications, as well as in adaptive optics, which allows astronomers to remove the blurring of the atmosphere when looking at faraway stars or planets.

And although NASA did not immediately adopt liquid crystal variable retarders at the end of the SBIR contract, the Space Agency has since become a customer of Meadowlark’s spatial light modulators, including for research conducted on the Space Shuttle, Baur recalls. “At that time they were being used for studying the growth of protein crystals in zero gravity.”

Overall, those decades-old SBIR contracts have continued to pay off hugely for the company, which grew from 10 or 15 people at the time the original liquid crystal variable retarders were developed to some 40 people today.

“In some way, 30-40 percent of all the products we sell use the technology that was developed in those SBIRs,” Baur says. “They absolutely helped grow the company.”

Abstract
Filtering different wavelengths of light can help reveal important information, such as clues to how well a plant is growing. Meadowlark Optics, with help from an SBIR contract from the Jet Propulsion Laboratory, developed a light filter that could be tuned to different wavelengths with a flip of a switch, hoping it could be useful for NASA’s many Earth-observing missions, but the result turned out to have wide-ranging applications far beyond plant stress, from nuclear fusion to brain research. 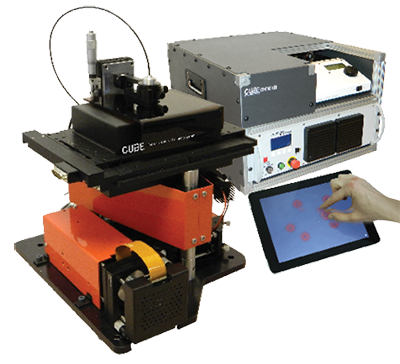 This setup shows optical tweezers, which use thousands of the liquid crystal variable retarders invented under SBIR by Meadowlark Optics to direct a laser beam through a microscope to “grab” tiny particles.

Liquid crystal variable retarders are light filters that can be tuned to different colors of light with electricity. The current causes the liquid molecules to change their alignment, allowing different wavelengths to pass through.

This image of the U.S.-Mexico border from 2000, combining visible and infrared bands, shows lushly growing, gridded fields (in red) on the U.S. side, compared to more sparse and irregular growth in Mexico. Tunable liquid crystal filters help focus in on different light wavelengths, which can reveal insights like which plants need more water or which might be diseased.