When imagining what it takes to design a spacecraft, few people think about the engineering work that goes into getting an accurate cost estimate before the building begins. And yet, software designed at NASA’s Marshall Space Flight Center to do just that has become one of the center’s most-downloaded codes.

Every industry relies on cost estimates when taking on a project, whether it’s a new car model or planning a menu at a new restaurant. But few estimates are more complicated than those for aerospace, where the industrial base is small and specialized and everything is typically custom-made for its application.

“We use historical data to estimate the cost of a future system,” explains Marshall cost engineer Andy Prince, “because in the space arena, you don’t have a production-type environment that you can rely on for data to feed your estimates.”

A team led by Marshall’s Engineering Cost Office has built NASA’s latest cost-estimating model, called the Project Cost Estimating Capability, or PCEC. “When you run the model, it will guide you through a process of building a work breakdown structure for your project,” Prince says. “Then you can select the cost-estimating relationships, or algorithms, you want to use to estimate the project.” For example, the cost-estimating relationships used for a Mars lander would be different than ones for a human spaceflight project or for a deep space telescope.

PCEC was first released in 2014 and has been updated yearly since. It replaces an earlier cost-estimating model designed in the 1990s, the NASA/Air Force Cost Model (NAFCOM)—and it adds a lot of helpful features. The biggest change is that NAFCOM was a stand-alone program, while PCEC works as an Excel add-in, which allows for more flexibility. Users can see all the formulas and even edit them if they want—and, since most offices already have Excel, PCEC is easy to install and use. It is also less expensive to develop and maintain that NAFCOM was.

PCEC is available under a general software usage agreement, which means it can be downloaded for free in the United States and internationally.

Dozens of companies, universities, Government agencies, and international organizations have already taken advantage, both because it can be used for any type of space mission and because there are no other publicly available competitors.

“Big companies like Boeing develop their own in-house models, but they’re not going to share those because they are considered proprietary and competition-sensitive,” Prince says. Likewise, military agencies have similar cost-estimating models, but those are withheld for national security reasons.

At universities, the software tends to be used in design classes. “Good engineers want to make the most efficient, effective system possible,” Prince says, “and this software helps them see that there’s a cost dimension that has to be factored into the efficiency and effectiveness of their design.”

In the commercial world, Lockheed Martin has found PCEC useful as a cross-check for its own cost-estimating models, especially in proposals for NASA. The company also uses the software as an industry baseline more generally, explains parametrics estimating manager Nichole Renda. “We have a strong in-house parametric and data analytics database of our own history, but there are times we want to get a cross-reference to see how that is trending or compares with industry. We use PCEC as that cross-check or validation tool.”

Lockheed Martin had previously used NAFCOM in similar ways, but Renda says the new version will be “used more than NAFCOM, for sure,” because of improvements including a better historical dataset and better algorithms.

The increased user flexibility also helps, says Lockheed Martin senior staff engineer Steve Graybeal. “NAFCOM was a little more of a black box. PCEC is a lot more transparent in terms of the data points and the statistics and estimating relationships. It’s more apparent what you’re doing now with the data.” 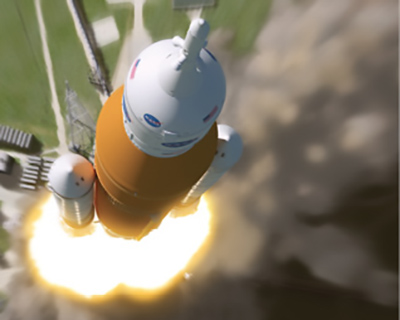 Estimating the cost of new spacecraft, like the Space Launch System that aims to bring the first humans to Mars, is a complicated feat. Software designed at Marshall Space Flight Center incorporates the many algorithms needed to do it into an easy-to-use and fully customizable Excel add-in—and has become one of the center’s most-downloaded codes.