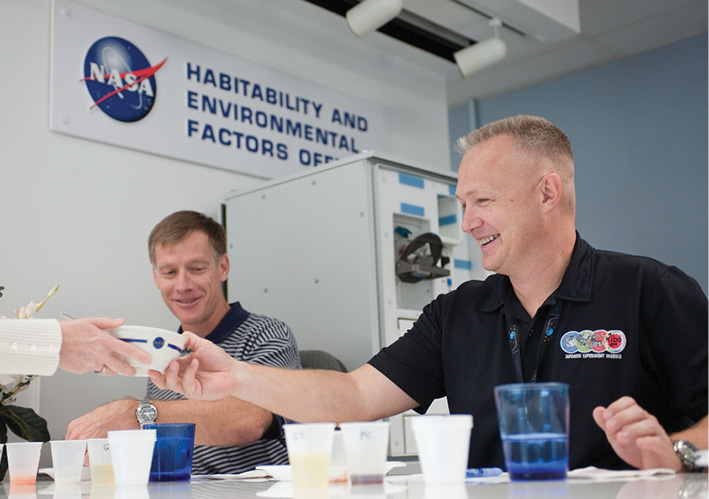 Crew health is critical to any successful mission, and maintaining astronauts’ nutrition gets harder the farther they get from Earth and any chance of a resupply mission. A crewed mission to Mars, for example, will have to pack food for up to five years in space. The food must stay as fresh as possible, provide precise amounts of needed nutrients, create as little trash as possible, and be appetizing enough for the crew to keep eating it.

NASA currently supplies the International Space Station (ISS) with individually wrapped, shelf-stable dishes, many of which simply require heating in the ISS food warmer. Space station astronauts can also choose from a variety of single-serving, freeze-dried side dishes and beverage packets that require hot or cold water be added. But these options are designed to last only six months in space, where food refrigeration would be an inefficient use of precious resources. The meals take up storage space before they’re eaten, and their packaging then becomes waste.

In its continuing search for new ways to provide nutrients and variety to astronauts on long-duration missions, NASA in 2013 awarded a Small Business Innovation Research (SBIR) contract to an Austin, Texas-based company with a novel idea. Systems and Materials Research Corporation (SMRC) proposed building food from scratch with a 3D printer that could deliver starch, protein, and fat, creating properly textured edible structures that would be supplemented with micronutrients, flavor, and aroma delivered by inkjet technology.

Unflavored macronutrients like protein and starch would be stored as dry powders and fed directly to the 3D printer, where oil or water would be mixed in at the printhead. The micronutrients and flavors, stored in packets as liquids or pastes, would then be delivered by inkjet.

These nutrients, even in powder form, break down over time, so NASA’s food scientists needed a way to deliver precise amounts of nutrients, accounting for the inevitable degradation. Adding too much could result in nutrient toxicity, while too little could mean deficiency.

Anjan Contractor, then a senior engineer at SMRC, was behind the company’s proposal. The intent was to eventually provide astronauts with precise, personalized, 3D-printed nutrition in microgravity, where crew time is limited and cooking is not an option. The connection was natural for Contractor, whose educational background is in mechanical engineering, with a focus on additive manufacturing, robotics, automation, and some software development.

As with most Phase I SBIR projects, the SMRC proposal was just an idea in its very early, conceptual stages. With the NASA funds, Contractor and his colleagues successfully developed a system capable of printing some basic foods from powdered nutrients, oil, and other liquids.

When Phase II SBIR funds to improve the nutritional components didn’t immediately follow, Contractor started to think about other applications for 3D food printing. It seemed unlikely that earthbound consumers would be interested in foods derived from powders, so he turned his attention to fresh ingredients instead. He began working on a 3D printer that could put together customized pizzas, with traditional (or even gluten-free cauliflower) dough, sauce, cheese, and toppings, one at a time. Pizza was a natural fit for 3D printing, which builds things layer by layer.

“It was basically the work I did for the NASA deep-space missions that led to this idea,” Contractor says. “Out of that knowledge and technology, I made my first prototype at home.”

In 2016, he founded his own company, BeeHex, with the initial strategy of traveling around with the prototype doing tech demos—and selling the results to people for lunch. After one such event—a football game at his alma mater, Ohio State University—local media picked up the story, including a front-page story the next day in The Columbus Dispatch titled “3D Printer Promises to Change Way Food Is Made.”

That story drew BeeHex’s first seed funding—nearly $1 million from the owner of a restaurant chain who saw endless applications for the technology, from breakfast bars to confections and baked goods, in addition to pizza.

“Since then, we’ve come a long way,” Contractor says. He moved BeeHex to Columbus, Ohio, and began working on a production-level prototype of his machine that could be customized for different tasks.

For one thing, he adapted it to decorate cookies and cakes. While BeeHex isn’t the first to use 3D printing technology to make food and decorate cakes and confections, Contractor says his approach was informed by his work for NASA, through SMRC.

The BeeHex printer, dubbed Chef 3D, can create protrusions and texture—the ribbon on the edge of a cake, a flower, or seasonally themed cookies, for example—designs that traditionally require skilled cake decorators.

BeeHex is trying a variety of business models. One route is a stand-alone machine that bakers can use to design on-demand confections. The company deploys the machine at minimal cost to bakers and charges only for the duration of use.

“We will have one in a popular cookie shop in Columbus,” Contractor says. “Any customer can go, select a shape, print their cookie, and right there get a fresh customized cookie on the spot.”

BeeHex has other 3D-printed food technology in the pipeline as well. For example, Contractor is working on a recovery bar machine that can personalize a breakfast or late lunch nutrition bar depending on a person’s individual needs, such as genetics, metabolism, and blood markers.

“We are trying to connect it to physiological data like heart rate, calories burned, hydration levels,” says Contractor, who is in talks with Columbus-area gyms about hosting such a device. “Right after a workout, people can get a personalized bar that covers 30 percent of daily recommended nutrition values.”

The breakfast bar got a boost from research BeeHex is working on with the U.S. Army. “With that project, we collect the personal profile of soldiers—genetics, lactose intolerance or a gene presence that may trigger it, diabetes, physical activity over the last seven days,” Contractor says. “Then we make the recovery bar.”

Even with so much potential on Earth—BeeHex has two patents pending for its Chef 3D device—Contractor believes the truly revolutionary 3D-printing developments will occur back in space, where human tissue may one day be printed in layers without concern that the bottom layers will get squashed by the top ones.

“I’m very confident that this is going to happen sooner or later,” Contractor says. “Tissues and organs needed for drug discoveries or human parts can be grown in space. It could be 30 or 60 or 100 years, but it’s very likely this will happen. The foundation is in the 3D printing—the same thing we’re doing.”

Abstract
Maintaining astronauts’ nutrition becomes harder the farther they go from Earth. Contemplating sending astronauts as far away as Mars, Johnson Space Center took one company up on a proposal to explore 3D-printing foods, awarding SBIR funding. After the company built a prototype, one of its senior engineers adapted it to print pizzas to sell on the ground. He founded BeeHex, based in Columbus, Ohio, altered his Chef 3D device to decorate cookies for customers, and is now working on printing custom breakfast bars based on individuals’ nutritional needs. 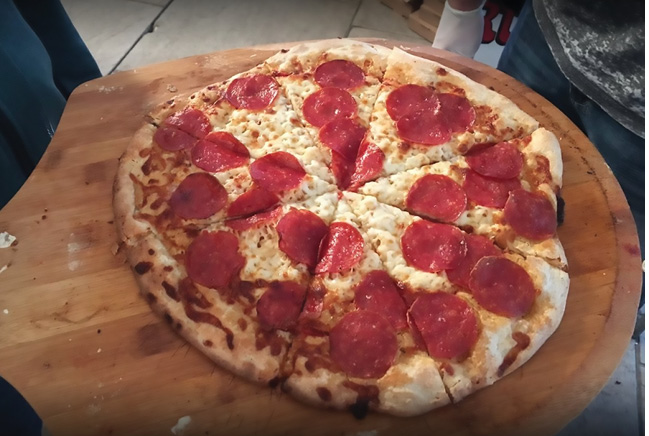 One of BeeHex founder Anjan Contractor’s first forays into 3D printing food began with customized pizzas built from dough, sauce, cheese, and toppings applied layer by layer. He credits NASA SBIR funding to explore printing basic foods from powdered nutrients, oil, and other liquids for the knowledge and technology that made his 3D-printed pizzas possible. 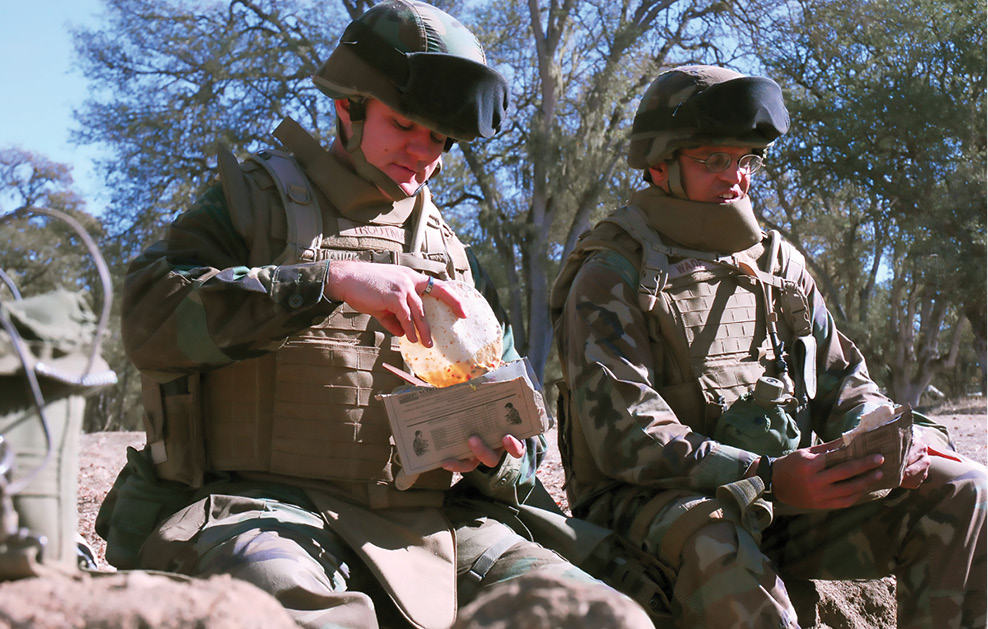 One application for BeeHex’s technology, developed in partnership with the U.S. Army, is collecting and analyzing physiological data to create custom breakfast or lunch bars tailored to a person’s needs. Image courtesy of the U.S. Navy

NASA astronauts Chris Ferguson (left) and Doug Hurley participate in a food tasting session in the Habitability and Environmental Factors Office at Johnson Space Center. As NASA looks to long-duration manned missions to the Moon, Mars, and beyond, it’s researching how to preserve food’s freshness, nutrient profile, and taste so that astronauts can both benefit from and enjoy the food they eat while they are far from home.