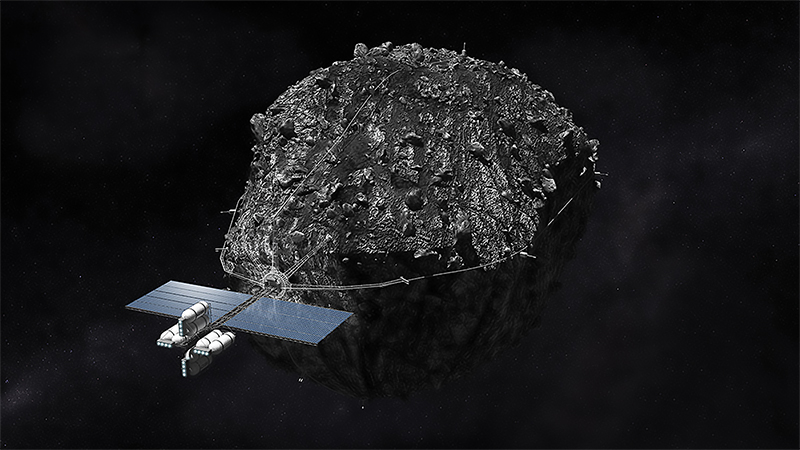 When companies finally begin mining asteroids in space, they probably won’t be looking for precious metals, nor anything else normally mined on Earth. Some space rocks do contain such materials, but priorities change in the harsh space environment, where water becomes the most valuable substance.

“Water is like gold in deep space,” says James Mantovani of Kennedy Space Center’s Granular Mechanics and Regolith Operations Lab. Water is not only necessary to sustain life, but it contains that other necessity, oxygen, which along with water’s other ingredient, hydrogen, can be turned into a common rocket fuel: liquid hydrogen oxidized by liquid oxygen. So the first missions to return with asteroid-mined resources will likely be carrying tons of water into Earth orbit rather than bringing rare metals to the surface.

Deep Space Industries (DSI), a San Jose, California-based company, is one of a handful of businesses working to develop capabilities for space mining, an activity still several years in the future. In the interest of these long-term goals, in 2015 DSI leapt at NASA’s solicitation to develop soil and crust that simulate the soil composition of four different types of asteroids. Any equipment for mining or even landing on an asteroid would benefit from testing with such simulants.

The first asteroid NASA wanted to mimic was Near Earth Asteroid 2008 EV5, which was the prime candidate for the Agency’s now-cancelled Asteroid Redirect Mission, a plan to robotically capture a large boulder from an asteroid and put it in orbit around the Moon for human study. Like the other asteroid types DSI was ultimately contracted to imitate, 2008 EV5 is a variety of carbonaceous chondrite, a class of asteroids that contain abundant carbon, as well as water and organic compounds, all useful for space travel.

NASA has never returned a sample from an asteroid, but, says Stephen Covey, cofounder and director of research and development at DSI, “it turns out we have small samples of a lot of different asteroids on Earth.” Meteorites—the remains of asteroids that fall to Earth—have been recovered all over the world and analyzed to determine their composition. These include at least nine types of carbonaceous chondrites.

DSI ultimately delivered a total of more than 11,000 pounds of four different asteroid simulants by the spring of 2018, working under two different Small Business Innovation Research contracts issued at Johnson and Kennedy and overseen by Mantovani at Kennedy.

The company produced simulant in both loose, granular form and in hardened “cobbles” that Mantovani compares to dried mud, as well as packages of each asteroid type’s individual mineral components. “We might want to play with the recipe, so that’s an added benefit,” Mantovani says.

The Kennedy scientist’s lab studies the mechanics of handling surfaces of other worlds, known as regoliths—from transporting surface material to dust management. For the Asteroid Redirect Mission, researchers wanted to use the simulants to test new tools and train astronauts for challenges like how to anchor to a given asteroid. Asteroids have very little gravity, so landing and digging on them requires reliable anchoring. Collecting samples presents challenges as well, since there is little to hold the dirt in a shovel.

“Whatever your application is, you want to try to refine it on Earth before launch,” Mantovani says.

For accurate simulants, DSI not only matched the chemical composition of known meteorites but tried to recreate the compaction, porosity, and granularity of their original surfaces, which had burned off in atmospheric entry. “We’re extrapolating from what we know of the behavior of materials on Earth and what we’ve seen on the Moon and Mars,” Covey says.

While Asteroid Redirect was scrapped, interest in asteroids remains high at NASA, whether among planetary scientists studying the evolution of the universe, mission planners who want to know what a spacecraft might encounter on its way to the outer solar system, or in-situ resource utilization engineers looking at ways to process surface materials to make water, air, fuel, and spare parts.

“At all the NASA Centers, there are people doing something with regolith, and they would like to use really good, high-fidelity simulants to develop their techniques,” Mantovani says. In 2018, his team began reaching out to the other NASA field centers and shipping out orders.

A number of universities have purchased the simulants DSI developed for NASA, as have other space agencies and a handful of companies that are also interested in space mining. A standard order is about 20 pounds, which Covey says is “enough to get started” on some basic research.

Mining asteroids is a long-term goal, one that Covey believes is at least five years out but promises to eventually pay hefty dividends. “The interest in asteroid mining is due to the fact that it’s so expensive to put anything in space,” he explains, pinning the cost at more than $11,000 per pound. Most of that weight is fuel.

DSI imagines extracting a couple thousand tons of water from an asteroid and using half of it as fuel to carry the rest back into Earth orbit. There, it would be available for sale as fuel for any passing spacecraft.

Boeing has already signed a letter of intent to buy a hundred tons of water whenever DSI can harvest it and make it available in orbit. “And there are a bunch of people at [the Jet Propulsion Laboratory] drooling over the idea of what NASA could do if DSI could bring a thousand tons of water to Earth orbit,” Covey says.

This water could also fuel a space tug lifting a satellite from low-Earth orbit. Launch to geostationary orbit costs several times what it costs to put a payload in low-Earth orbit. But a space tug using asteroid-harvested fuel could pull a satellite from a few hundred miles above Earth to 22,000 miles out relatively cheaply. “That’s a viable business for someone,” Covey says. “We want someone else to build the tug, and we’ll provide the fuel.”

That said, the company is working on other technology that could help enable such a tug, such as thrusters that derive their fuel from water, a spacecraft designed to launch from low-Earth orbit into deep space, and aerobrakes for return to Earth orbit.

Beyond water, DSI also wants to eventually use elements harvested from asteroids to manufacture parts in space. “If we could build all the heavy, dumb parts of a satellite in space and just send up the expensive, high-tech electronics from Earth, there would be a big market for that,” Covey says, adding that solar panel cells built in space would find an even larger customer base.

And for NASA, DSI imagines its technology extending deep-space research missions that could hop from one asteroid to the next, continually refueling.

But all these ambitions hinge on basic research, some of which depends on the same crust and dirt NASA needed for planning. “To test our own excavation technology, we need asteroid simulants ourselves,” Covey says. “It’s great that our goals have matched enough with NASA’s needs that we could help NASA while helping ourselves and a few others along the way.”

Abstract
Water is “space gold,” and Deep Space Industries is working on technology to mine it from asteroids. The San Jose, California-based company answered a call from Kennedy Space Center to develop special mixes of dirt and rocks that mimic the surfaces of asteroids to help test equipment. Now the company sells the simulant to universities, space agencies, and other companies interested in space mining. 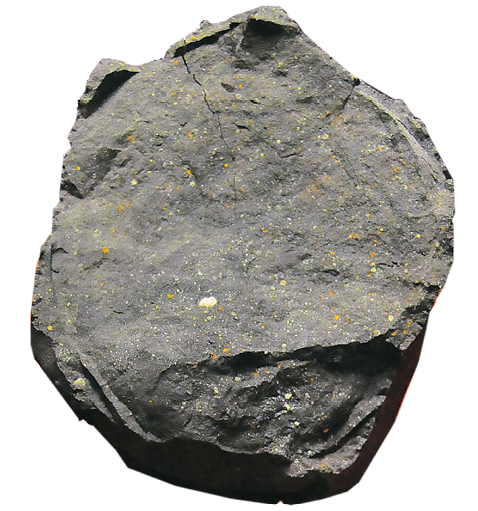 Researchers know a lot about asteroids from studying the ones that have fallen to Earth. The Murchison asteroid, a piece of which is shown here, struck near Lake Murchison in Australia in 1969. This is a CM-type carbonaceous chondrite, predominantly made up of clays and rich in organic compounds. CM-type asteroids present a potential source of water, shielding materials, and other resources and are one of four types Deep Space Industries (DSI) simulates. 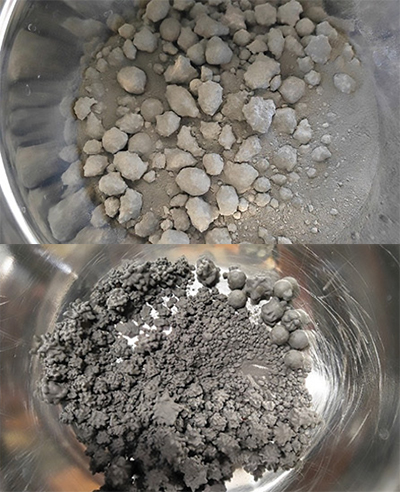 DSI customers can buy raw asteroid simulant powders or mixes of a range of grain sizes.

DSI ultimately wants to set up asteroid mining operations with spacecraft like this harvester concept. Any machinery bound for an asteroid, though, first needs to be tested in asteroid simulant to see how it will perform.