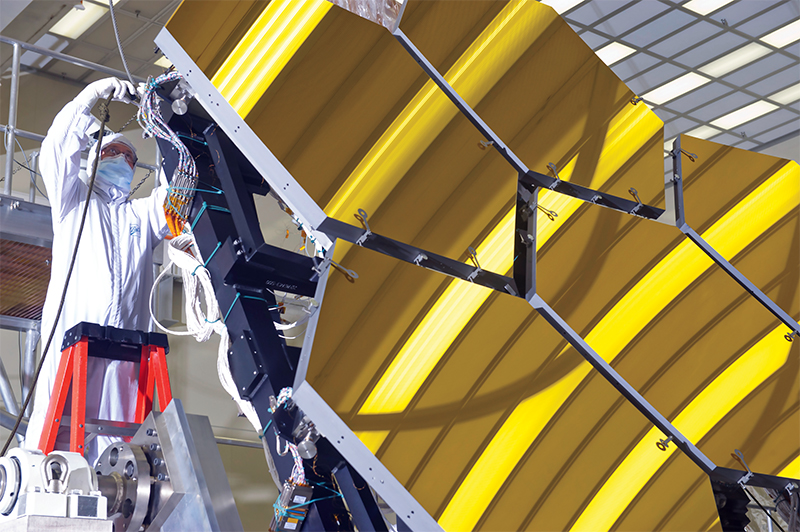 The James Webb Space Telescope is a mechanical eye so penetrating it will look back in time to the dawn of the universe. And its cornea of lightweight, durable mirrors is largely to thank for all we’ll learn from the images it sends back to Earth.

The telescope, scheduled to launch in 2021, will peer into space from almost a million miles from Earth, orbiting a Lagrange point, where the combination of the sun’s and Earth’s gravity creates a relatively stable parking spot. For observations, it will rely on a set of gold-coated mirrors capable of handling punishingly cold temperatures to collect radiation emitted by the earliest stars.

NASA couldn’t use glass for Webb’s mirror as it did for the Hubble Space Telescope’s mirror, which operates at room temperature. Detection of faint infrared light—actually heat emitted billions of years ago—requires the near absence of heat in its instruments. The Agency needed a lightweight, durable material that would maintain a stable shape at temperatures approaching absolute zero and that could withstand the hazardous journey into space.

“We had to pick a material we knew we could make at room temperature, and we knew it would change shape as it went cold but would do so in a predictable and consistent way every time,” recalls Paul Geithner, a deputy project manager for Webb based at Goddard Space Flight Center. “Beryllium is a really good material for that. It’s really stiff and, once it gets below about -300 °F, it basically stops shrinking.”

This is important because Webb, insulated by a sun shield, will operate at about 30 K (-406 °F) and only experience temperature swings of plus or minus 30 K, never reaching a temperature that would cause it to expand.

Beryllium also has a higher stiffness-to-mass ratio than other materials, “which wasn’t a selection criteria but is an advantage, as it means you get a lighter mirror, better able to withstand the high vibro-acoustic levels during takeoff,” notes Lee Feinberg, the telescope manager for Webb at Goddard.

When NASA was planning the telescope, Mayfield Heights, Ohio-based Brush Wellman, now known as Materion Corporation, was one of the top beryllium-producing companies in the world. The company owns a major bertrandite mine in Utah and had perfected the process of treating beryllium and crafting it into the kind of light but sturdy mirrors NASA needed for Webb. After a bidding process, Materion won the contract to build the mirrors.

The mirrors began as a powder. But unlike other beryllium powders, which are made up of block-like grains, Materion’s is gas atomized to be spherical, allowing for a uniformity in its properties in all directions, adding to the mirrors’ quality and durability, explains Jason Clune, manager of applications and business development for Materion Beryllium and Composites. To create the mirrors, the powder is poured into a “large pressure vessel that reaches really high pressures and temperatures. Under those conditions, the powder is pressed in all different directions at the same time, fusing it together.” It’s a process known as hot isostatic pressing (HIP).

This produces mirror blanks with a homogeneous microstructure, resulting in repeatable and predictable shape change—just the thing that was required for Webb.

The mirror blanks Materion created weighed just under 600 pounds, but other NASA contractors subsequently machined them down to roughly 46 pounds. Together, the 18 individual mirrors make up the massive 21-foot, 4-inch primary mirror.

As work continued, Materion won contracts to make additional components, including the secondary and tertiary mirrors, along with other features that were originally planned to be made from carbon composites, Clune says.

“For us, it was the first time that we had to manufacture the spherical powder in very large quantities,” he says. “That was a challenge, but we were highly successful at doing it.”

Materion won several awards for the HIP tools it created to make the mirrors, which adapted the process to ensure the mirror blanks wouldn’t fold or otherwise deform permanently when cycled through cryogenic temperatures.

The Webb mirrors “are some of the most precise large components manufactured in the United States,” Clune adds. NASA received the mirrors ahead of schedule, which Clune thinks might have helped keep the project alive amid shifting budget priorities.

As a result of the Webb work, Materion developed an industrial standard for the gas-atomized spherical beryllium powder. “We developed a quality production document just for these mirrors, and after this project, we moved our entire system to what’s called an aerospace requirement, AS-9100,” Clune says, referring to official standards of the Society of Automotive Engineers and the European Association of Aerospace Industries. “We transformed ourselves into an aerospace-certified business, so now all of our materials are made that way. Anyone can come to us and get the same high-quality product. The requirements are pretty stringent and, as a result, the products are consistent.”

Beryllium is used in military satellites and other Department of Defense equipment, but Robert Michel, manager of market development for Materion Beryllium and Composites, says it’s nice to have the NASA work in the company’s portfolio of successes. Materion has also provided components for both of the Agency’s Ice, Cloud, and Land Elevation Satellites, as well as the Cloud-Aerosol Transport System on the International Space Station.

Back on land, beryllium is used in most X-ray and mammogram machines, as the material is “almost transparent to X-rays, so technicians can use a much lower dose of radiation on their patients,” Michel says.

Both Michel and Clune anticipate Materion and beryllium’s profile will grow as other applications are embraced. “There are already talks about the next James Webb and what materials will be used,” Clune says. “We want to leverage what we did in the past to work on the next-generation program. That’s one of the strengths of our company and our work with NASA.”

NASA has been impressed with Materion’s work. “To my knowledge, there’s no other place in the country that could’ve made beryllium of this quality,” Feinberg says. “The option of making beryllium mirrors would not have been very feasible” without the company. 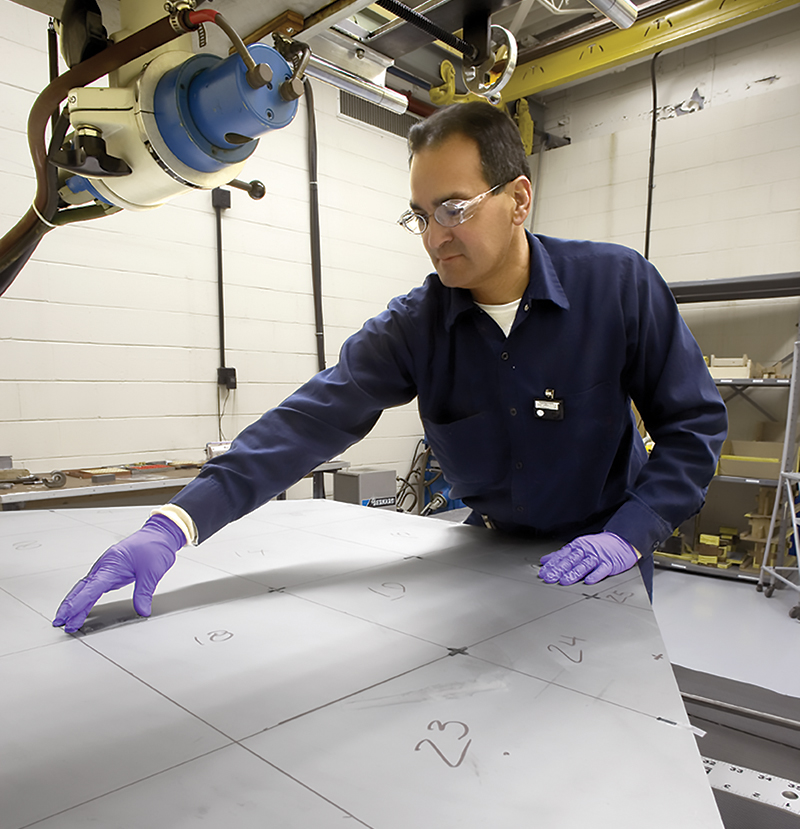 A radiographer at Brush Wellman, now Materion Corporation, prepares a beryllium mirror blank for an X-ray radiograph. The slab was later machined down to create a mirror for the James Webb Space Telescope.

The James Webb Space Telescope mirrors are removed from Marshall Space Flight Center’s X-Ray and Cryogenic Facility following testing. The mirrors are made of beryllium in part because the material will deform predictably when taken from room temperature to near absolute zero.