Space exploration comes with many giant challenges, but some of them are downright tiny. One project to solve a connection issue in printed circuit boards has resulted in a miniature solution—a micro-coil spring less than half a millimeter in diameter—that could have an outsized impact on electronics for spacecraft and here on Earth.

However, those joints can break when things heat up—a particular problem in space, where temperature swings between sun-facing and shaded orientations can be extreme, and where repairs and replacements are hard to come by. Because the circuit board and the electrical components are generally made of different materials, explains Marshall Space Flight Center aerospace engineer Jim Hester, “the materials both expand, but the integrated circuit expands less than the circuit board does, and that tries to shear that solder joint.”

The current state of the art is to create a “solder column” at the joint. The increased length allows a degree of flexibility, but it’s still fairly brittle.

“We wanted something that might be a little more robust from a handling perspective, with higher reliability from a thermal perspective,” says Hester’s co-inventor Mark Strickland, a fellow engineer at Marshall.

After considering a variety of interconnections, they decided on a tiny spring. “The real challenge comes from taking the spring and mounting it onto the circuit board,” he notes. “If you look at a spring from the side, you have a nub that sticks out: the bottom is not flat,” which makes it difficult to attach perpendicularly to the board.

Strickland and Hester devised a method and tested the resulting connections under extreme conditions, cycling back and forth from -70 °F to nearly 260 °F. Compared to solder columns, the spring connections lasted at least twice as long on ceramic devices, based on first failure for space applications, with improved consistency and uniformity, and at least five times longer on plastic devices, and could withstand vibrations at forces of up to 10 Gs.

“The springs are also just more robust from a handling perspective during assembly,” Strickland adds, “so they’re not as fragile if you are touching the part.”

In 2014, Strickland and Hester’s innovation won the top prize in the electronics category of Tech Briefs’ Design the Future challenge, and Marshall saw potential for the invention outside aerospace—after all, printed circuit boards are used in a wide array of contexts. Strickland and Hester pursued a patent, and meanwhile Marshall’s Technology Transfer Office approached Milledgeville, Georgia-based Topline Corporation.

When licensing manager Sammy Nabors showed him the details, says Martin Hart, Topline CEO, “the light bulb instantly went off. I understood the product could fit into our general product line.”

“We’re selling the springs, and we’re also attaching the springs to test components that the industry is using to make their own tests and verifications,” Hart says. The company offers a variety of sizes, from 0.2 mm diameter by 0.5 mm in length up to 0.5 mm diameter by 1.27 mm long.

To attach a component, he notes, would typically take an array of 1,000 to 2,000 springs, and he emphasizes that the process for attaching springs had to be perfected and streamlined in-house. “NASA does a great job at figuring out a better way to do things, but it’s not a blueprint.”

The target application “is large ceramic-substrate components that will fail if you use a solder ball, ball grid array,” he says, because the larger the part, the more extreme the heat expansion differences will be.

He sees potential in medical devices, like hearing aids, but notes, “We’re still at the beginning of discovering the market.”

But he says the NASA origins have helped open doors: “When the customer realizes that the invention was made at NASA, they’re more willing to listen, read about it, consider buying it.”

Abstract
A connection issue in printed circuit boards led to a tiny solution that could have an outsized impact. Printed circuit boards are layered with copper lines and pads that connect electronic components together. However, the joints can break when things heat up. Marshall Space Flight Center’s Mark Strickland and Jim Hester engineered a micro-coil spring connector that is far stronger and longer-lasting. Milledgeville, Georgia-based Topline Corporation now sells the springs and attaches them to components for industry tests and verifications. 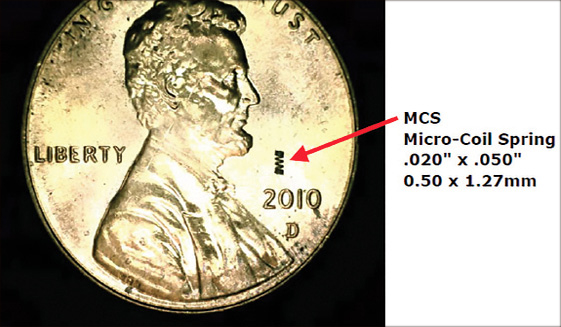 Tiny springs like this one help connect electronic components to circuit boards. Because they are flexible, they make stronger, longer-lasting connections, which is great for space—and high demand applications on the ground.