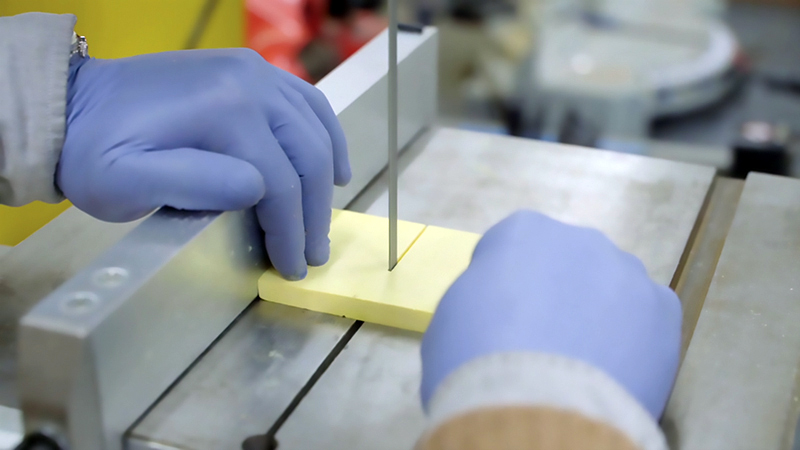 Space-Age Insulator Evolves to Replace Plastic and Save Weight

When aerogels were first invented in the 1930s, nobody had much use for them. And yet, nearly a century later, these materials could become as ubiquitous as plastics, says one entrepreneur—and it never would have been possible without NASA.

Aerogels are a class of materials made by creating a gel and then carefully removing all the liquid. The result is the world’s lightest solid—in some cases over 99 percent air, contained within nanopores distributed throughout a spongelike structure. While most aerogels have historically been made out of silica, over the last two decades scientists have developed aerogels out of a variety of other materials, each imparting its own special properties.

But the commercial potential of aerogels only really got a jumpstart after a NASA-funded project figured out how to turn the famously brittle material into something useful. In the 1990s, a Small Business Innovation Research contract funded the development of aerogel-infused blankets, which were durable, flexible, and world-class insulators.

As the promise of aerogels started to be realized, NASA continued funding research into the materials for other applications. Most recently, says Glenn Research Center’s Mary Ann Meador, “we’ve been working on using aerogels as a substrate for antennas.”

Meador has been working on techniques to create aerogels out of polyimide and polyamide materials. Unlike silica aerogels, which can shatter at the slightest touch, polyimide and polyamide aerogels can be cast into tough, flexible, and extremely lightweight sheets and boards of various thicknesses. “If we have an antenna that we want to mount on the side of the aircraft, it can conform to the wing or fuselage or wherever,” she explains.

And because aerogels are mostly air, they conduct electromagnetic waves extraordinarily well, “which means we can improve the gain of the antenna, the bandwidth, and also reduce the weight by 50 to 70 percent,” Meador says.

Meador’s antenna work for Glenn is part of a project called CLAS-ACT, which stands for Conformal Lightweight Antenna Structures for Aeronautical Communication Technologies. But she is among the first to say that the applications for these aerogels she has helped create have many other potential applications, including well outside NASA.

That’s why Glenn has not only patented several of these aerogel inventions but made them available through the Technology Transfer Program. The compelling properties of these materials, plus the low cost of licensing patents from NASA, says Aerogel Technologies founder Stephen Steiner, made licensing Meador’s aerogel portfolio “a no-brainer.”

Steiner’s company, based in Boston, was the first to license a Glenn technology through NASA’s QuickLaunch program just after it went live in 2013 and was so pleased with the results that it went on to license more technology. “NASA is creating technology that can really transform the world,” he says. “With a close relationship, companies like mine and researchers at NASA can really do the amazing things that neither of us can do alone and bring the technology to the next step.”

Meador agrees the relationship has benefited both sides. “They seem to be pretty open with us, and the more open they are, the more we can help them,” she notes. “And meanwhile, while we’re working on our own NASA-funded projects, along the way there are opportunities where their interests and ours can converge.” For example, Glenn is focused on the low electromagnetic resistance of aerogels, so there is little need for NASA to invest in measuring how well these new aerogel materials work as insulators. However, Aerogel Technologies does thermal conductivity testing itself as it works on developing other kinds of products and can share that information with Meador’s team.

Steiner traces his own interest in aerogels to a high school science fair project in 1999 in which he hoped to make a titania aerogel as part of a project to use sunlight to separate hydrogen from water for fuel. “I started by reading whatever I could about aerogels,” he recalls.

Ultimately, he won second place at Intel’s International Science and Engineering Fair with his project, which by then included a homemade supercritical dryer, or autoclave, and a new process for rapidly gelling aerogel precursors.

More importantly, Steiner’s interest was piqued—eventually leading him to see potential for aerogels to act as ultralight alternatives to plastics. “Our products are able to go into cars and airplanes to make them lighter—which can make them tremendously more fuel-efficient,” he says. “That can reduce carbon emissions on a global scale more effectively than anything I would have done from making hydrogen with titania.”

He spent more years studying aerogels and, even before the Glenn relationship, acquired aerogel patents for polymer crosslinked oxide aerogels originally invented at the Missouri University of Science and Technology, all with the goal of eventually supplying a lightweight plastic alternative to manufacturers. But he found production was limited by the size of his autoclaves—the pricey machines that extract liquid from the aerogel—because he could only make parts as big as would fit inside.

An accident in 2013 changed that: one of the autoclaves at Aerogel Technologies, loaded with drying aerogel tiles, rapidly depressurized, going from 100 atmospheres to zero in seconds instead of hours. “Normally if this happens, everything in your autoclave would be blown to smithereens. But the aerogels were intact. We took them out, put them on the counter, and found out the materials turned out just fine,” he recalls.

Within a year, Steiner says, his team had reverse-engineered the accident to create a new technique for drying aerogels, without losing any of the materials’ properties, in ambient conditions. “This new process, totally different and much faster, allows us to make aerogel parts of theoretically unlimited dimensions outside a vessel. That became the basis of the future of our company,” he says. The new ambient drying process also lowers the cost of the materials, since, notes Meador, “probably the biggest cost in the aerogel is in the processing.”

Aerogel Technologies has branded its mechanically strong aerogels “Airloys,” and it makes them out of polyimides and polyamides based on the licenses from Glenn, as well as with other materials. “To the end user, they’re different flavors of the same thing,” Steiner says.

Airloys can be manufactured with a wide array of mechanical properties—including high temperature tolerance, transparency, and varying degrees of flexibility and stiffness—many of which are built on advances made at Glenn. “We’re trying to reinvent the image of aerogels. These are a whole class of materials you can machine and glue—amazing new technology, not like what you’ve seen before,” Steiner adds.

Aerogel Technologies is working with airline manufacturers and automakers from Airbus to Ford to potentially replace many plastic parts, in particular in airplane and car interiors, with Airloys. By reducing the overall weight of the vehicle, aerogels could significantly reduce costs and fuel consumption—for a passenger jet the size of a 737, Steiner says, that could add up to a savings of around $1,100 of fuel for an average U.S. domestic flight.

Other current customers include an apparel company, drone manufacturers, and companies that make coolers, he adds. There are also a number of sensors that have integrated Airloys, he says, “where it’s a tight heat-management problem and you also need a structural non-dusty material.”

Steiner thinks that within 10 years, Airloys will be a standard material for manufacturers in many industries, once Aerogel Technologies gets past the hurdle of testing and qualifying them for these new applications. “We’re interested in the race to the top, to find the applications where a value-added material, even if you’re paying more up front, is so compelling in terms of operating cost savings that it’s definitely worth it,” he says.

“We’re working with multibillion-dollar companies that are foresighted enough to see opportunities in new materials to help reduce weight, reduce fuel consumption, and reduce costs for the world’s most demanding applications.”

Abstract
When aerogels, the world’s lightest solids, were first invented, they were incredibly brittle and nobody had much use for them. Nearly a century later, the material could become as ubiquitous as plastic, says the founder of Boston-based Aerogel Technologies. NASA has discovered ways to make different aerogels stronger, flexible, and able to withstand high heat, among a range of other properties. Now, after in-house R&D and licensing patents from Glenn Research Center, Aerogel Technologies is selling the material to a variety of industries, including airplane and car manufacturers. 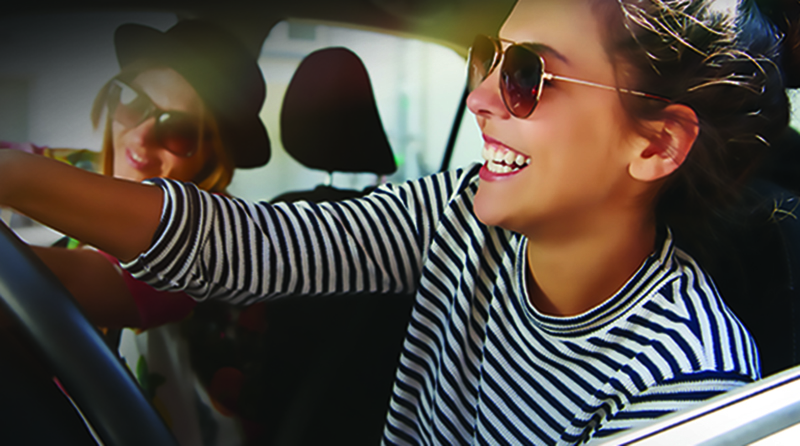 Aerogel Technologies sees its Airloys as a lightweight plastic replacement, which, if installed in cars and planes, could have a positive environmental impact by lowering fuel needs and emissions. 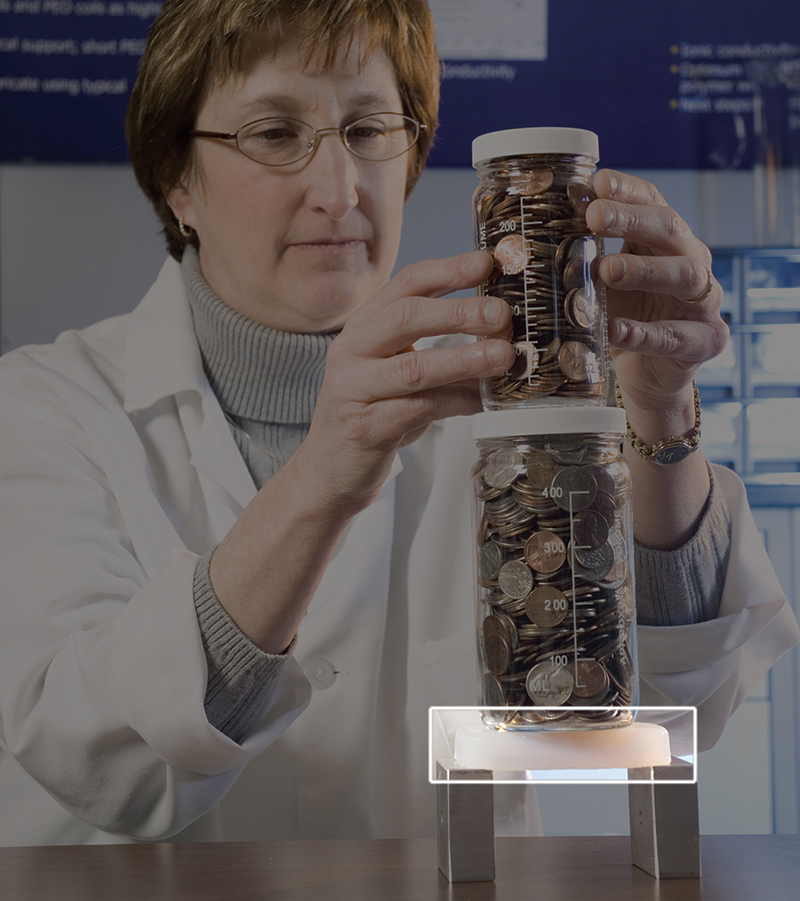 Aerogels are mostly air—they’ve been called the world’s lightest solids. But early versions were extremely breakable. Here, Glenn Research Center scientist Mary Ann Meador shows off one of the new variations she has helped craft—one that is extremely strong.

Aerogel Technologies, thanks to internal research and development as well as several technologies it has licensed from Glenn, manufacturers a class of aerogels it has branded Airloys. They can be made with a variety of properties, including high temperature tolerance, transparency, and varying degrees of flexibility and stiffness, and can be cut and machined into any shape.