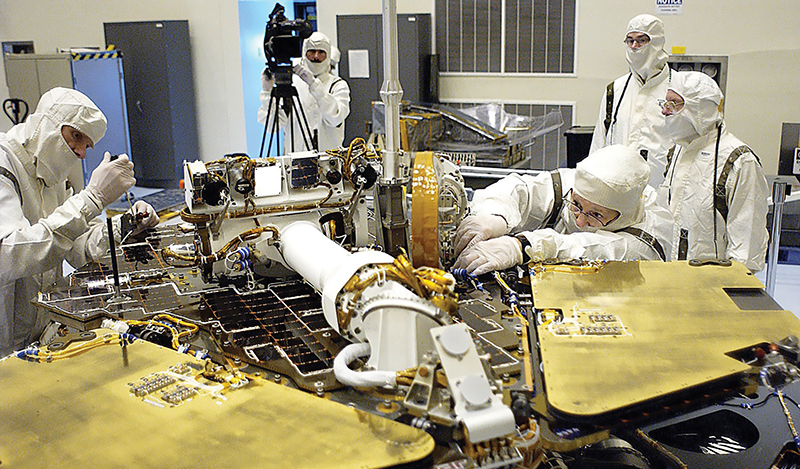 Everybody has felt it from time to time: that sharp jolt of electric shock you get when you walk across a rug and touch a doorknob.

It’s a result of static electricity—electrons rubbing off the rug and building up on your body and then jumping to the metal knob. What you might not realize is that this happens all the time, all day long. In fact, by the time you feel that electric shock, explains Goddard Space Flight Center’s Alvin Boutte, it’s only because the electric charge has built up to at least 3,000 volts or more.

Of course, besides making you jump, that electric shock isn’t going to do much damage. But what if, instead of touching a door knob, you were building a delicate sensor for a Mars or lunar rover? “When you’re building an instrument for a spacecraft, you start at a very low level: tiny parts being put on a board,” says Boutte, “and that’s probably when it’s most susceptible.

“Once you put it on a board, then in a box, then in a spacecraft, it gets less and less sensitive,” he explains, because each of those layers is built in part to protect the electronics. But in the early stages, that 3,000-volt charge from your finger is more than enough to fry the entire instrument, he says. “Many of your electronic parts are going to be sensitive at much lower ranges, 250 to 300 volts. You could build up that much charge without even knowing it and discharge without even realizing it happened.”

That’s where Boutte, his team at Goddard, and their counterparts across NASA come in, helping devise and implement protocols to minimize and avoid any electrostatic discharge events during instrument manufacturing.

One tool that has helped in recent years is a training seminar conducted by RMV Technology Group, based in Moffett Field, California. Although multiple companies offer trainings on electrostatic discharge, NASA initially went to RMV because it was one of the few that include hands-on exercises during the course, which the company holds in its own electrostatic discharge (ESD) laboratory environment.

The first training RMV provided was in 2014, Boutte recalls, and since then there have been several sessions—and the feedback Boutte and others have provided has helped shape and improve the course. For example, Boutte explains, NASA shares with the company the materials it typically uses, helping RMV tailor the training to the types of processes that would work best in those contexts.

The company said the back-and-forth has paid off in more than just improved NASA trainings. “We were very specific in our training that it applies to what the NASA requirements are,” says RMV President Renee Mitchell. “And what’s interesting is that what NASA requires, the Department of Defense requires. This collaboration with NASA also benefits the U.S. military.”

Mitchell is quick to clarify that there was never an exchange of funds or specific contract between NASA and the company to develop the training. Nevertheless, “since we work closely with NASA program managers from most centers, they collaborated with us, and we incorporated their requirements into the training program.”

Among other areas the company added to its training at NASA’s request were modules on recognizing suspected counterfeiting—so engineers and technicians could ensure the materials they buy from outside suppliers maintain the required specifications.

Last year, RMV partnered up with a company called Exemplar Global, an affiliate of the American Society of Quality, to get formal certification. As a result, NASA’s ESD program managers and NASA’s Safety Center were the first to earn certification from the International Association for Radio, Telecommunications, and Electromagnetics (iNARTE) as ESD Aerospace and Defense Engineers, a credential that is now also available to the general public.

“It’s really a great case of a vendor listening to the feedback from their customer and actually implementing it in their product,” says Boutte.

Now RMV is finding clients outside NASA also appreciate the improvements that have been made in the training. The company has just launched a subsidiary devoted specifically to marketing the course, called ESD Aerospace Training. It has already conducted two seminars for the U.S. military and had interest from two universities.

“In the military, it’s all about logistics,” Mitchell says. The company’s electrostatic discharge training teaches engineers and technicians how to handle and store electronics so they maintain their integrity over long periods of time, especially in places with extreme temperatures and very low humidity, such as the Middle East or Afghanistan. In addition, she says, like NASA, the military often manufactures its own sensitive or classified equipment, which requires careful handling.

The commercial aerospace industry is also booming, she notes, and all these new entrants are also prime candidates for electrostatic discharge training.

As with NASA, the big selling point for the company’s training is what Mitchell calls the “deep dive”—a detailed, hands-on approach. Many competitors, she says, offer basic training on standard processes but don’t teach how to troubleshoot and solve problems. “The engineer or technician isn’t able to learn how to use instruments and audit a facility or to test materials before they’re used,” she says.

And Mitchell sees much broader market potential, for example in the medical industry, which “is also dealing with harsh environments—the human body is considered a harsh environment.” Whether a company is building a pacemaker or a microdevice to track or adjust drug dosage in the body, she says, “you have to understand the relationship between conductive materials and biology.”

Abstract
The shock you might get when touching a doorknob is electrostatic discharge, and when you’re building sensitive electronics, it can wreak havoc. Goddard Space Flight Center’s Alvin Boutte and others across NASA devise and implement protocols to minimize electrostatic discharge. One tool that helps is a training seminar conducted by Moffett Field, California-based RMV Technology Group. Boutte and others have provided feedback that has helped shape and improve the course, and now that same training is helping the company’s other training clients, including the U.S. military and universities.

RMV Technologies is one of the few companies that offers hands-on training for best practices in avoiding electrostatic discharge during manufacturing, handling, and storage of sensitive electronics. Their seminar benefited from input from NASA, and is now being offered widely. The U.S. military is one customer. Image courtesy of U.S. Army

Technicians remove a circuit board on the Mars Exploration Rover 2 to repair it. They must be especially careful to avoid electrostatic discharge, essentially an electric shock. These shocks happen all the time, usually at low enough levels that people don’t even feel it. But sensitive electronics such as circuit boards on spacecraft can be damaged by even extremely low-level shocks.