It’s no surprise that some of NASA’s biggest breakthroughs and most popular spinoffs have been in the field of temperature management. The Space Agency not only has to deal with the temperature extremes of space and atmospheric reentry but also must manage large amounts of cryogenic liquids on the ground.

It was for this latter application that a Kennedy Space Center engineer sought a new material in the early 1990s. Aerogels, which are gels with all the water removed (and gel is almost entirely water), were already known to be the world’s most insulating materials, along with several other superlatives, but these ultra-lightweight, nanoporous materials were also brittle to the point of uselessness, as well as costly to make. James Fesmire, who was in charge of the systems that provide liquid hydrogen and oxygen fuel to rockets on Kennedy’s launch pads, put out a call for a flexible composite aerogel that could be used to better manage the transfer and handling of cryogenic rocket fuels.

Much has been made of the resulting insulation’s use in consumer goods (Spinoff 2001, 2008, 2010, 2018), as well as a spinoff into building insulation (Spinoff 2009), but its most widespread use is in industrial applications, where it’s saved users thousands—in many cases millions—of dollars by conserving energy and reducing labor, replacement and repair costs, and downtime.

In 1992, a company called Aspen Systems proposed a silica aerogel reinforced with ceramic fibers and won two Small Business Innovation Research (SBIR) contracts from Kennedy. The cookie-sized lab prototypes the company produced under that funding literally tested off the charts for insulation performance. Fesmire’s team had to invent a new device, dubbed Cryostat-1, to adequately assess the thermal performance of the next version Aspen created under follow-on SBIR contracts from Kennedy.

Less than half as conductive as even the best foam insulations, these blanket aerogels—the first flexible, practical aerogel insulation—were used in several critical applications. One, in 1996, was in the cryogenic liquid hydrogen and liquid oxygen umbilical connections for the X-33, an experimental single-stage-to-orbit space launch vehicle.

Further gains were made under contract to Johnson Space Center in 1999 for use in spacesuits. For this job, the company substituted polyester fibers for the ceramic fibers, resulting in significant improvement, says George Gould, now the chief technology officer at Aspen Aerogels Inc., the company that spun off from Aspen Systems in 2001 to market this new type of insulation. The company continued working with NASA, undertaking almost three dozen SBIR contracts across most of NASA’s field centers over the next decade or so.

These days, Gould says, most of the Northborough, Massachusetts-based company’s work with NASA consists of supplying the Space Agency with the existing Aspen Aerogels products that NASA helped develop.

The company’s three basic product lines, high-temperature Pyrogels and mid- to low-temperature Spacelofts and Cryogels—all in the form of flexible blankets—were established in the company’s early years and are now installed in industrial plants, steam distribution systems, buildings, pipelines, and much more all over the world.

One advantage of the company’s insulation is that it’s sturdy and easy to use, says Brian Cahill, director of marketing at Aspen Aerogels. “It’s flexible, insensitive to workmanship, it installs faster, and it’s low-maintenance.”

One Gulf Coast refinery replaced six-inch-thick calcium silicate insulation, a traditional high-temperature option, on a single yield line with less than three inches of Pyrogel—and estimated it saved $25,000 in labor alone. It was also able to restart sooner than expected, leading to additional savings.

Being thinner than other insulations due to its high thermal performance, the material allows for effective insulation in tight spaces and even saves money on shipping, handling, and storage. Pyrogel XTE, billed as the most effective high-temperature insulation on the market, is two to five times thinner than non-Pyrogel alternatives.

In the past, customers with high-temperature insulation needs were stuck with low-performance insulation, Cahill says. The best insulators used binders that oxidize at 400 or 500 °F, while those based on ceramic or silica fibers survive higher temperatures but are much less effective. But Pyrogel, with its silica aerogel reinforced with glass fibers and laced with infrared-scattering particles, offers high performance at temperatures up to 1,200 °F. “We’ve certainly redefined high-temperature insulation, and we’ve redefined the expectations of users across the world,” Cahill says.

The applications where Aspen Aerogels’ insulations might hold the biggest advantage are steam distribution and other systems that are often exposed to water. Many municipalities, universities, and hospitals still use high-pressure steam for heating, cleaning, sterilization, humidification, and powering turbines and other systems. But the pipes that deliver steam are exposed to water in heavy rain and flooding.

Traditional insulation begins to disintegrate with repeated soaking, and the moisture causes the underlying pipes to corrode. It also cools the steam pipes, robbing them of their energy, and the insulation eventually has to be discarded and replaced at considerable expense. The corrosion causes safety issues and can even lead to explosions. It’s such a problem that many municipalities have given up on insulating steam pipes, Cahill says. “We think of insulation as a force for good, but badly designed insulation can be a force for crisis and havoc when it misbehaves.”

Gould notes that all of Aspen Aerogels’ insulation is both water-repellant and breathable, meaning whatever moisture does get under it can quickly evaporate. “It has the fastest water-release response of any thermal insulation,” he says. It also maintains a pH level that inhibits corrosion.

Cahill notes that one medical institution, worried that it wouldn’t have enough steam to operate in a storm, had considered spending about $5 million to replace its steam equipment. Instead, it spent a few hundred thousand dollars replacing the pipe insulation with Pyrogel.

A South American petrochemical complex that replaced its steam line insulation with Pyrogel estimates it saves about $1.3 million worth of energy per year by avoiding insulation degradation.

“One customer described it as a pretty boring material, because it just stays where you put it,” says Cahill, noting that the company takes this as the highest compliment.

Cities with Pyrogel-insulated municipal steam distribution systems include New York, Philadelphia, Boston, Seattle, and Baltimore. Rainy Seattle had given up on insulating its steam pipes for 30 years before discovering this aerogel option.

Twenty-four of the world’s top 25 refineries use Aspen Aerogels insulation, as do most of the largest chemical companies.

Meanwhile, the company’s lower-temperature insulations, based on polyester fiber-reinforced aerogels, have also caught on. Its Spaceloft line is most commonly used to insulate buildings and subsea oil pipelines. Spaceloft lines more than 550 miles of subsea pipelines in more than 40 locations around the world. German chemical giant BASF has an exclusive deal with Aspen Aerogels making BASF the sole customer for the Spaceloft A2 product, which it uses in its Slentex wall system for the building materials market, as well as a complementary fireproof insulation.

And Cryogel, which is similarly durable and easy to apply and stays flexible at cryogenic temperatures, is also becoming popular, Cahill says, noting that in spring of 2019 the company won a $40 million contract to insulate a liquid natural gas receiving facility in Thailand with Cryogel. It’s an application that’s also catching on domestically, he says. “Liquid natural gas is quite a boom commodity at the moment, with the U.S. becoming an exporter.”

Cahill notes that it’s rare for a company to specialize in both high-heat and cryogenic insulation. “I don’t think anyone else participates in both extremes of the spectrum.”

In addition to countless industrial and consumer goods applications, Aspen Aerogels’ insulations are also popular in cars and other vehicles. Cahill notes that many German auto manufacturers buy large quantities of aerogel but don’t publicize their proprietary use of the materials. “We know we’re installed in pretty much every Formula 1 car,” he adds.

The company also has worked extensively with the military and supplies insulation to the Navy, Air Force, and Missile Defense Agency, although these agencies don’t report back what they use it for.

Gould says the work on polyimide aerogels has been key to a carbon aerogel that’s now in late-stage development. “We have a treasure trove of technologies creeping their way to commercialization,” he says.

As transportation moves toward electrical power, the company is also working on an insulation optimized for batteries, capacitors, and other components of electrical systems. “We’re pretty excited about the future of nanoporous materials for energy generation, conservation, and storage,” Gould says. “Insulation never goes out of fashion. No matter what you’re generating energy from, you’re still going to need to preserve temperature gradients.”

He also notes that the company is open to partnerships with other entities that might have new applications for its insulations. “The number of things aerogel can do is astonishing. We don’t know all the needs out there.”

Aspen Aerogels now employs about 300 people to manufacture almost 40 million square feet of insulation per year, about twice what it was producing in 2010. The company’s 2018 revenue totaled more than $104 million.

“We’re growing, and we think there’s a lot of good stuff to come,” Gould says. He says the company’s first years of product development with NASA were instrumental to its success. “That early work set the bar for what we could aspire to. I always say, if it’s good enough for NASA, it’s good enough for anyone on the planet.”

Abstract
Beginning with two SBIR contracts from Kennedy Space Center, Aspen Systems worked with NASA to develop the first sturdy, practical aerogel insulations. The effort spun off into Northborough, Massachusetts-based Aspen Aerogels, a 300-person company with over $100 million in annual revenue. While the ultra-lightweight, super-insulating materials appear in many consumer products, their primary applications are in power plants, steam distribution systems, buildings, pipelines, and other industrial applications all over the world, where they conserve energy and reduce costs and downtime.

Pyrogel insulates a heat-exchange vessel in a petrochemical facility. 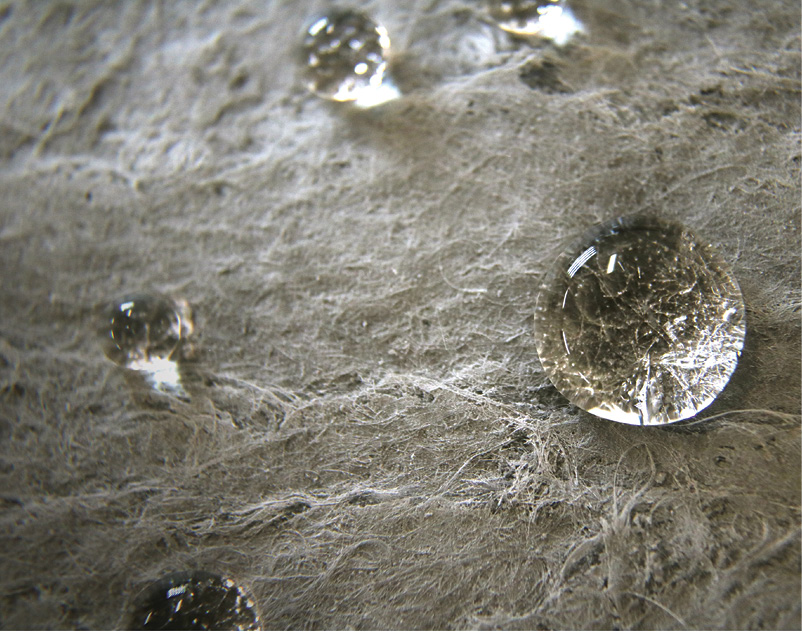 All of Aspen Aerogels’ insulations are water-repellant, one way they prevent corrosion of the underlying pipes and vessels. Corrosion due to wet insulation in steam distribution systems, for example, is such a problem that many municipalities have given up on insulating their steam lines. 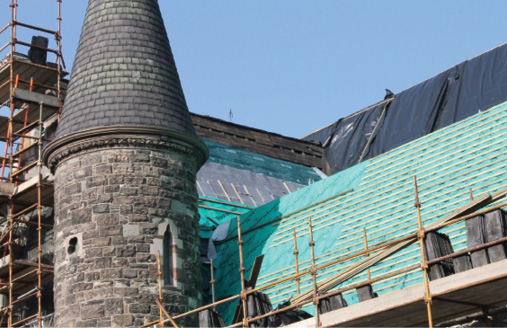 Insulation made with Aspen Aerogels’ Spaceloft product is used to renovate a historic building in Belfast, Northern Ireland.

In the spring of 2019, Aspen Aerogels won a $40 million contract to insulate pipelines at this liquid natural gas receiving terminal in Thailand with its Cryogel Z insulation.