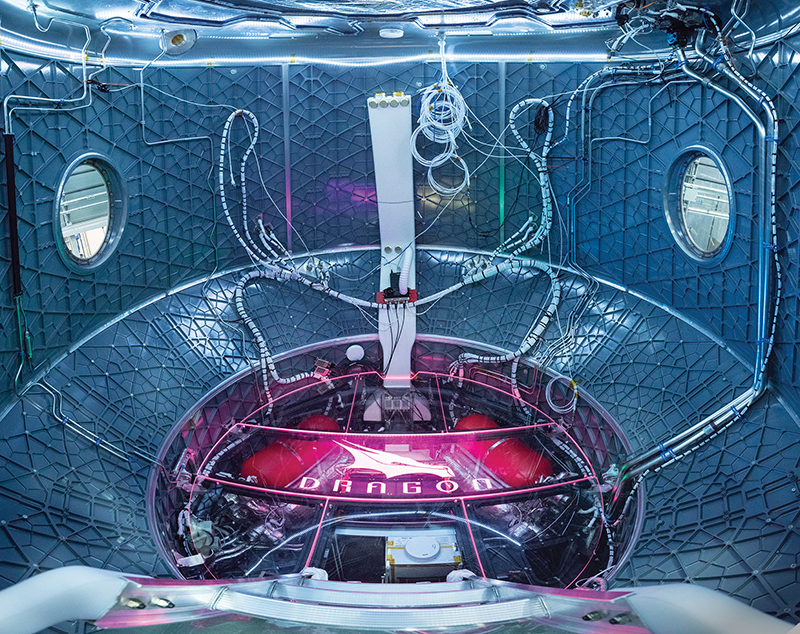 A lot can and does go wrong with technology, as Dr. Terry Rolin, an electronic systems failure analyst at Marshall Space Flight Center, knows well. His job is all about finding solutions to problems—and, if he can’t find any, inventing new ones. When Rolin and his team were tasked with figuring out what caused a particularly large battery system to fail in 2011, it led them to consider a fundamental question—can we engineer a better power source?

Drawing on the team’s background in materials engineering, Rolin and his team got to work. They took a blank-canvas approach to the problem by considering the ideal characteristics of a power source and trying to find materials to meet those criteria better than traditional systems.

“We started working with solid materials to get away from liquids and gels and to avoid toxic material,” explains Rolin. And following some cutting-edge engineering with nanomaterials, he says, “we were able to invent a novel device that we call an ultracapacitor.”

This ultracapacitor, according to Rolin, is a new class of power source, representing something like a hybrid between supercapacitors and batteries. Specifically, it combines high capacitance (or the ability to store a charge) with “battery-like discharge characteristics”—that is, delivering sustained power over time. As a solid-state material, it’s also more resistant to adverse conditions such as the temperature extremes of space, and it’s safer to manufacture and operate than traditional battery systems.

While Rolin and his team hope this revolutionary material has a big future in space and commercial power systems, in the meantime, a quirk in the properties of their innovative material has opened up an unexpected application.

In early testing, Rolin noticed a peculiarity he couldn’t explain: “For a good energy storage system, we need a lot of capacitance,” he says. “When I held the ultracapacitor in my hand and tested it, the capacitance was really high. But when I put it down on a table and tested it again, it dropped dramatically.”

The technologists initially thought Rolin’s body heat was affecting the capacitance, so they ran tests in a thermal chamber. The capacitance never changed.

“We soon realized it was the moisture in a breath that was causing this big change,” explains Rolin. “We ran it in a humidity chamber, and sure enough, we saw this huge response of capacitance over a range of humidity.”

Humidity sensors measure the amount of moisture in the air by detecting changes that alter electrical currents or temperature. The NASA ultracapacitor was extremely sensitive to changing conditions, detecting miniscule shifts. It also recovered quickly because it easily shed any surface moisture that collected.

To measure the speed of response time, the team tested its performance against commercially available humidity sensors and found that it was faster. After performing all the humidity testing they could in-house, Rolin says, they needed an industry partner for more extensive testing.

He approached the Technology Transfer Office at Marshall for help. The office advertised the technology, and a NASA supplier, Roscid Technologies Inc., based in in Woburn, Massachusetts, contacted NASA. The company supplies NASA with high-end analyzing equipment for testing high-purity gas measurements. Roscid offered to evaluate the new technology because the staff was intrigued. Collaborating on the humidity sensor was an opportunity to explore a new technology that, on first review, looked promising.

“We asked Terry if he could send some samples,” explains Ken Murray, vice president of new business development. “We initially approached it with the idea of seeing if the material was robust and how well it would perform in numerous environments.”

The tests run “in some pretty nasty environments,” including “horrible chemicals, big temperature changes, and lots of cycling.” The company confirmed the newly created NASA material has a valuable secondary property.

The size of the sensing surface needed to pick up humidity changes and give off a signal depends on a number of factors: the type of sensing material, the environment, and the application. Most sensors use some kind of polymer or ceramic, materials that can have low sensitivity, so they must be rather large.

A problem all existing sensors can experience is damage from the moisture they test. Over time, the sensors will absorb liquid, which erodes the sensing material. This causes the reading to drift, or it may cause the sensor to stop working altogether. Therefore, continuous monitoring is necessary to ensure accuracy of data and replace damaged units. This means most sensors are short-lived and add costs to system maintenance.

Murray found that a very small amount of the NASA material, about a hundredth of an inch, is all that’s required to get consistent, accurate readings. To translate that signal into meaningful data, Roscid custom-built and perfected electronic components that are compatible with the new material.

“As we got further into the study of the sensor, we wanted to take it to the next level,” says Murray. “Every time we made a comment on something we learned, Terry would tweak the recipe a little bit. The sensor would be a little bit more robust for the applications we were testing.”

Roscid signed two back-to-back evaluation licenses with Marshall to move beyond NASA testing requirements. When Murray approached potential new customers with samples, he says, “the response was overwhelmingly positive.” So the company signed a non-exclusive license and began marketing its model CBNS215 humidity sensor in 2019.

“After processing every batch of drugs, pharmaceutical companies have to check sensors against calibration standards to make sure they haven’t drifted,” he says. “If any unit failed, they could have to go back and redo or quarantine the last batch.”

Stable sensors will make it possible for a company to widen calibration cycles, resulting in a significant impact on the bottom line.

Sensors can drift or fail after a single “moisture event.” That could be as little as condensation accumulating on the sensor or as great as dousing a sensor in some kind of liquid. Because this new material sheds moisture, these problems could become a thing of the past.

“The NASA sensing material is a solid-state construction, so there is nothing to wash away,” explains Murray.

This reliability is an essential characteristic for high-humidity, low-temperature applications such as refrigeration. Because a refrigerator door is constantly opening and closing, humidity and temperature are always changing. Maintaining ideal conditions is extremely difficult without continuous monitoring.

A manufacturer of high-end residential refrigerators is evaluating the CBNS215 sensor for a vegetable crisper tray. The goal is to maintain 95 percent humidity at 37 °F. Until now, the company has never found a sensor that will do that consistently over time.

“There’s a test that those guys run that’s pretty challenging,” says Rolin. “Roscid ran a similar test in-house and according to Roscid, ours was the only one that ever passed. That’s pretty exciting.”

A significant problem Rolin would like to solve is one that would save consumers and gas companies millions of dollars annually—water leeching into gasoline.

Murray believes the new sensor can help. “Monitoring moisture levels inside underground gas storage tanks can cut down on the transferability of the water into your automobile,” he explains. Sensors could also be added to vehicle gas tanks warning drivers before moisture enters the fuel supply.

Companies that produce oil and gas have also expressed interest the CBNS215 sensor. They need a technology to function at low dew points and down to -94 °F. The aluminum oxide sensors currently in use have serious limitations—a slow response time and the duration of dry-down. It can take days or weeks before a system is operational after a moisture event. Murray is working with the industry to verify that the NASA sensor will be a viable replacement.

Cold sterilization, refrigerated shipping containers and trucks, and airlines are just a few more industries interested in this sensor technology and in discussion with Roscid.

“Especially for military airplanes, it’s good to have a moisture sensor that accurately reads the dew-point levels in the atmosphere the plane is flying through,” explains Murray. “That’s being investigated right now.”

These varied applications are introducing new industries to NASA technology, and Murray gives a lot of credit to the Space Agency for that.

“If NASA says it works, then it works,” he says. “NASA is such a great partner because they’re really committed not only to their work, but also to the commercialization process.”

Rolin and his team are looking for space applications to benefit from this unexpected discovery.

“Now that we know it’s sensitive over a range of humidity and that it seems to survive temperature excursions, we have the confidence to put this in one of our test beds,” he explains. “Then if it performs well, NASA has a sensor that was made possible because of the partnership with Roscid.”

The sensor is scheduled to go into space on the Materials International Space Station Experiment flight. A successful flight will prove the new material can be used in future missions.

Noting that NASA uses humidity sensors on the space station for environmental control and life-support systems, Rolin envisions a tiny sensor that will help monitor everything from sleep apnea in astronauts to early detection of dangerous system leaks.

As for the ultracapacitor application, preliminary results are promising, with more tests to come.

“You could have a combination system that stores energy and also serves as a humidity sensor in rockets and other spacecraft,” says Rolin.

This new NASA ultracapacitor is a solid material designed to store energy and to be safer than batteries made with toxic liquids and gels. While this new power source was undergoing testing, it showed a remarkable sensitivity to humidity. 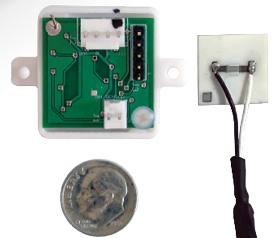 The accidental discovery of a solid-state humidity sensor surprised the NASA engineers who were working on a new power technology. The effort to find a substitute for batteries made with toxic materials led to this new humidity sensor that can provide moisture-level readings for the inside of a refrigerator or spacecraft. 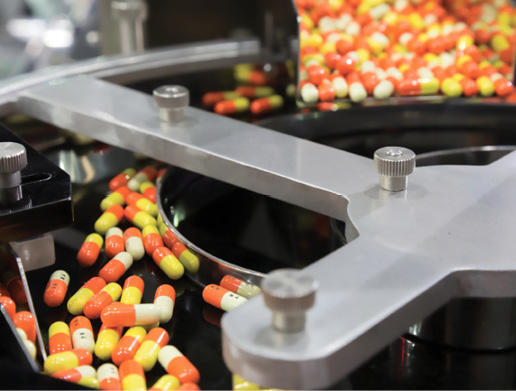 Moisture is a problem for manufacturing in numerous industries, including pharmaceuticals, making it critical to sense and control humidity. If a sensor fails or the calibration drifts, it can result in significant losses. NASA’s new solid-state humidity sensor could revolutionize the industry with more reliable hardware.

This replica of the SpaceX Crew Dragon spacecraft is testing the Environmental Control and Life Support System for crewed spacecraft. Life-support systems in space are complicated and delicate. The NASA-invented solid-state humidity-sensing material could help detect small leaks in these systems because it’s sensitive to minute changes in the air, making it possible for astronauts to make necessary repairs and prevent any serious problems.Image courtesy of SpaceX