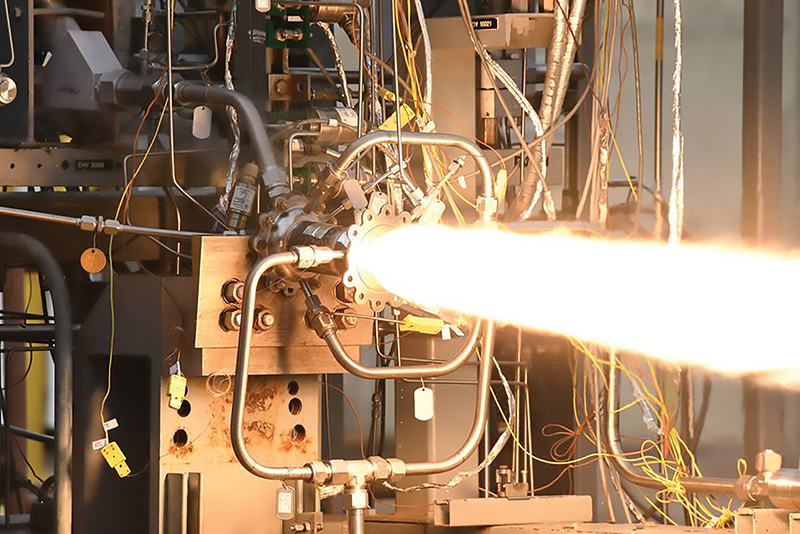 Spacecraft fuel tanks have always been round, because they need to hold as much fuel as possible under as much pressure as possible with a minimum of material, and the best shape to balance those factors in pressure vessels is a cylinder.

But even though round containers are stronger than square ones, which have weaknesses at their corners and edges, they’re still a less efficient use of space. So what if you could build a cube that could maintain the same pressure as the cylinder, without adding much mass?

That’s never been realistic under traditional methods of manufacturing, explains Ted Swanson, who recently retired as Goddard Space Flight Center’s senior technologist for strategic integration. But there is a way to do it, he says, at least potentially, with 3D printing. “You can maintain the pressure by building internal struts, and it’s all built at once so there’s no welds or anything like that.”

That’s not the only type of structure that could be vastly improved or made possible for the first time through 3D printing (also called additive manufacturing, because structures are typically built up layer by layer). “We’re also looking at it for things like sensors: getting parts small and making a 3D structure such that you don’t have to worry about adding in these tiny wire bonds, which are a failure point on electronics. You can just print it all together, and fewer parts means higher reliability and lower costs,” Swanson says.

And of course there is another massive benefit to 3D printing: portability. “When we’re up in space, we don’t want to carry a storehouse of stuff. We’d like to be able to make anything we want.”

In short, says Swanson, 3D printing “is the way of the future,” or at least a big part of it. But getting to that future will still take a fair amount of work, because compared to traditional manufacturing, much less is known about the materials, the vendors, the equipment, and ultimately, the potential pitfalls of the process.

“We currently don’t have the perception of reliability, and therefore there’s a much higher perception of risk,” Swanson says. “There are a lot of variables that just leave you wondering, ‘Well if I get this part out of this thing, can I use it? Do I know that it’s going to perform the way I expect it to perform?’”

The only way to combat that perception of risk is with plenty of research and testing, which is something NASA does very well.

NASA isn’t the only Federal agency looking at 3D printing. The Air Force, for example, is interested in having a reliable source of spare parts in remote locations without waiting for them to be flown in.

Recognizing that widespread interest, as well as the broader commercial potential within the U.S. economy, in 2012 the Obama administration established a public-private partnership called America Makes to advance research in and applications for additive manufacturing. NASA was among the original partners and provided some of the funding.

Swanson, who was already advocating for more 3D printing research at NASA, went to the kickoff event for America Makes and there met Larry Varholak, then head of Oxford Performance Materials (OPM) Aerospace and Industrial, who was interested in a thermoplastic called Polyetherketoneketone (or PEKK) for 3D printing.

Swanson immediately thought the material could be great for space, he says, “because it’s a very high-grade polymer. It can be used for selective applications—if we know its printed properties and we can be assured that it’s manufactured in a reproducible and predictable fashion.”

Varholak teamed up with Northrop Grumman, which was already working on adding PEKK to the materials it uses for printing airplane parts, explains Eric Barnes, a Northrop Grumman Fellow. “This eventually led to our current formulation of PEKK mixed with discontinuous carbon fibers,” which help dissipate electrostatic charge.

Northrop Grumman proposed research and testing of printed PEKK, with the material supplied by OPM and another company, to America Makes. The proposal included testing for some 3,000 data points on strength and durability and other qualities important to knowing how a part would perform over time in real life.

Of the 3,000 data points, nearly 1,000 were suggested by NASA to qualify the material for space, Swanson says. “We go much colder than aircraft ever go, so I wanted some cryogenic tests done. I also wanted to know if it will outgas volatiles, which might condense on our sensors or optics and mess things up,” he says, adding, “We weren’t involved in the proposal, but we were involved in the analysis.”

The testing was a success, says Varholak, whose division at OPM has since been sold to Stamford, Connecticut-based Hexcel Corporation. First and foremost, the printed material performed extremely well: among other results, it showed almost no outgassing and it was resistant to deterioration from radiation, which made it a good material for space. It’s also a 600-degree melt plastic, which means it is able to withstand temperatures from 300 °F below zero to 300 °F above, and in a fire, it is flame retardant with very low smoke generation and toxicity.

Although the printed parts are not quite as strong or durable as ones machined from a solid using traditional manufacturing, the results are very close, and the benefits of 3D printing outweigh the difference for many applications, Varholak says.

“The unique thing about 3D printing is there are no tools and no upfront costs,” says Varholak, which makes it much faster and less expensive to build a prototype or a new part. In addition, “you can build anything in any shape with any level of complexity. Now you’re building things that historically only nature could conceive.”

The comprehensive test results enabled the company to demonstrate to customers they could have confidence in the reliability and properties of the final product. That quickly paid off, Varholak says: “We won a major contract from Boeing to build parts for the Starliner,” a new commercial crew spacecraft. He says they built 600 parts for that spacecraft, including important structural elements such as brackets to hold fuel lines, as well as components of the life support systems inside the crew capsule.

Since the America Makes project ended in 2015, Northrop Grumman, with Hexcel as a key supplier, has also been using the PEKK-carbon fiber composite, says Barnes. They started with parts for ground systems and in 2017 expanded to parts for military aircraft. The company is also developing it for space applications, he adds.

The process will replace existing parts, he says, or combine multiple processes into a single part, and because the material is safe in a fire, it could be used inside the cabin to provide a very high level of safety for passengers in an emergency.

The basis for getting these new applications approved is the database the company created with NASA’s input during the America Makes testing, he emphasizes. “It’s an excellent story of how America Makes funded the development of this next-generation technology that has been wildly successful.

Abstract
Additive manufacturing, or 3D printing, makes it possible to manufacture entirely new structures or integrate existing ones into single components. But for applications like aerospace, high-grade structural materials and extensive testing are required. As part of the America Makes initiative, a public-private partnership to advance research in and applications for additive manufacturing, Goddard Space Flight Center teamed up with private companies on a project to investigate the properties of PEKK, a high-grade polymer, and now Stamford, Connecticut-based Hexcel Corporation is selling the material and 3D printing parts for spacecraft and aircraft.

Another benefit of additive manufacturing is that, because the process builds components layer by layer, allowing engineers to combine parts together into a single component rather than joining multiple pieces. Hexcel Corporation printed this piece using the NASA-tested Polyetherketoneketone (PEKK) material and was to be used for ducting.

In 2019, engineers test-fired a 3D rocket engine combustion chamber at Marshall Space Flight Center. NASA has been exploring the use of 3D printing for a variety of spacecraft applications, because it speeds up the development and production timeline for prototypes and new parts and allows for replacement parts to be easily manufactured away from Earth.