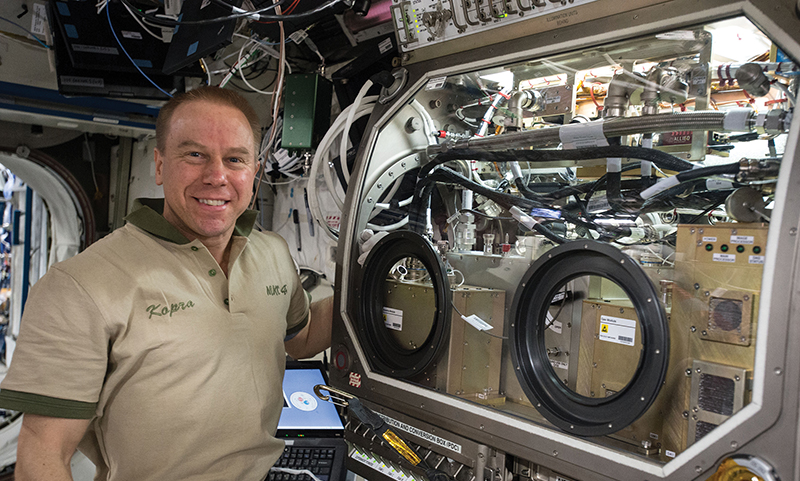 Gravity draws water from a faucet into a cup. Air bubbles rise because they’re lighter than the water around them—gas and liquid effortlessly self-separating. In countless ways, we take advantage of such predictable behavior, every time a boat floats or water circles a drain. But in space, none of these rules apply. Without gravity to put them in order, gases and liquids must be managed in other ways.

So NASA scientists have long sought better ways to observe the behavior of these fluids in zero gravity and to monitor the systems that handle them, such as those that purify air and water in spacecraft.

“There’s always been a desire to measure how phases are distributed in a tank or in a flowing tube and how that impacts function,” says Brian Motil, chief of the Thermal Systems and Transport Processes Branch at Glenn Research Center.

This was especially important for projects like the Two-Phase Flow Separator Experiment and the Packed Bed Reactor Experiment, both of which Motil oversaw. The former aimed to separate air and water through inertia by spinning them. The latter observed how air and water moved together through a packed bed reactor, a type of device that directs substances into a vessel packed with a catalyst to create desired reactions. Packed bed reactors are used on the International Space Station in air and water purification systems, fuel cells, and other devices, as well as in many applications on Earth. Currently, none of the packed bed reactors on the space station both liquid and gas, because scientists don’t know how a two-phase system would perform in microgravity, but such a device would promise more efficient thermal-management and life-support systems.

In the interest of both projects, Glenn started talks with a few teams that were using electricity for three-dimensional imaging in the mid-2000s. One, at Ohio State University, was working to bring new advances to the technique of electrical capacitance tomography (ECT) and would soon found Tech4Imaging LLC of Columbus, Ohio.

The technique isn’t entirely different from other forms of tomography—ways of seeing the insides of pipes, structures, or bodies. “A ray passes through the material, and the intensity of the ray changes,” explains Qussai Marashdeh, the company’s CEO and cofounder. “How it’s attenuated by the material inside will tell you what the material is.”

ECT uses low-frequency electrical signals instead of the sort of high-frequency, dangerous radiation used in CT scans and X-rays. And it doesn’t require any of the bulky, high-powered equipment used in MRI techniques. Instead, a series of metal capacitance plates surrounding an object send and receive the signals. But ECT had serious limitations. Its three-dimensional scans were built from layers of two-dimensional scans, leading to low resolution.

Marashdeh and his Ohio State colleagues solved the problem by inventing what they call Electrical Capacitance Volume Tomography (ECVT), in which improved circuitry allows the plates to send signals to each other in all directions, vastly multiplying the number of signals. These are combined with sophisticated mapping software to create a true three-dimensional image.

When Motil started talking with Marashdeh’s team, they were able to image solids and gases reasonably well with this method. “He did it better than anyone else, showing an ability to measure these things, but only in a really pristine lab setting,” says Motil, adding that there were still issues with resolution and calibration. After Tech4Imaging formed, Motil encouraged the company to apply for NASA Small Business Innovation Research (SBIR) funding.

In 2015, under a Phase I SBIR contract from Johnson Space Center and a larger Phase II contract with Glenn, the company set out to measure multi-phase flows with ECVT technology.

“Through the NASA work, we were able to overcome a major hurdle, which is how to measure liquid water,” says Marashdeh.

Motil says another major development under the Phase I work was the ability to measure the rate and amount of liquid, gas, and solid flowing through a conduit by detecting shifting gradients in capacitance. Motil says Marashdeh’s team is the first he knows of to develop algorithms to translate that gradient into a velocity profile. It can distinguish oil from gas and water, suggesting one likely lucrative market.

With Phase II funding, the company developed new algorithms and refined its electronics to detect not just changes in the amplitude of electric signals but also shifts in their phase, Motil says, noting that this resulted in higher resolution and eliminated a need to frequently recalibrate the system.

The resulting ECVT technology still hasn’t flown in space, as it wasn’t ready when the Packed Bed Reactor Experiment launched in 2015, and funding was cut for the Two-Phase Flow Separator Experiment.

However, the company had already been selling earlier versions of the technology to scientists and researchers, and Marashdeh says he’s been in talks with major companies in a number of industries about a commercial version of the technology he developed for NASA.

“The oil industry now can’t tell you how much oil is flowing through a pipeline,” Marashdeh says. “They have to wait on separation, drain it, and then measure it.” Tech4Imaging has been working with industry leaders to develop a standard product for gas and oil pipelines, which he expected to be available around late 2019.

The company is also working with Marashdeh’s colleagues at Ohio State University to validate a product to measure powder and airflows in pharmaceutical manufacturing. But he notes that the technology could help optimize and monitor manufacturing processes in any industry, from plastics to potato chips.

He and colleagues have also been working on applying the technology to nondestructive testing of infrastructure. For example, it can detect holes, cracks, and water in concrete piping, and an added magnetic signal can look for corrosion on steel rebar.

Another potential application, he says, is in improving computational fluid dynamics software that engineers use to simulate air and liquid flows when designing vehicles and a slew of other products.

Marashdeh is especially excited, though, at the possibility of using ECVT for medical imaging. “It’s safer, smaller, and cheaper, and you could wear an image sensor and link it to a device,” he says. Although an MRI scan still offers higher resolution, he adds, the company is working to close that gap.

For now, though, he says the company is in talks with major players in the oil and gas, mining, and chemical industries, who see immediate opportunities for savings.

While the SBIR funding seemed like a high-risk investment at first, Motil says, it was always apparent that if the technique could be improved to meet the Space Agency’s needs, it would also open many other possibilities. “The end result is going to have more impact on industry than on NASA,” he says. “I think there’s tremendous spinoff potential with this.”

Abstract
In the interest of studying interactions of liquids and gases in zero gravity, Johnson Space Center awarded SBIR contracts to Tech4Imaging LLC of Columbus, Ohio. The company had invented a technique that used electrical signals to create a 3D image of solids and gases inside a pipe or vessel. With the SBIR funding, the company developed the ability to distinguish water and oil and also improved resolution. The technology has clear applications in the oil industry, as well as manufacturing, testing infrastructure, and medical imaging.

Tech4Imaging’s ECVT technology uses a series of capacitance plates surrounding a pipe to sense flows of up to three phases. A processor uses sophisticated mapping software to make sense of the data, calculating the flows and displaying three-dimensional images.

NASA astronaut Tim Kopra shows off the Packed Bed Reactor Experiment on the ISS. The experiment, which observed how gas and liquid move together through a packed bed reactor in microgravity, was one reason NASA invested in Tech4Imaging’s electronic capacitance volume tomography (ECVT). It would have helped to get clearer images of substances moving through the packed bed, although the technology wasn’t ready in time to fly with the experiment.