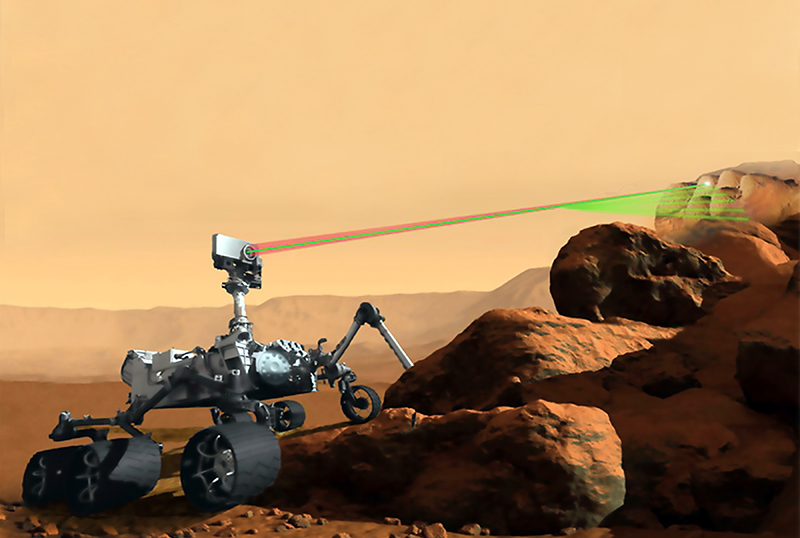 On the outside, NASA’s Mars 2020 rover will look nearly identical to the 2011-launched Curiosity rover. But inside, engineers are packing more-advanced instrumentation—and more instruments—into the same frame. Together, these will, for the first time, search directly for signs of past microbial life on the Red Planet and attempt to extract oxygen from the carbon dioxide in the atmosphere, among other objectives.

One of Curiosity’s most-used instruments is its laser-induced breakdown spectroscopy (LIBS) system, which can analyze the composition of surfaces at distances of more than 20 feet. The instrument, the first of its kind ever flown in space, fires a high-powered laser pulse that momentarily rips surface molecules into plasma, producing a brilliant flash. By analyzing the spectrum of that flash, the system can determine the molecular composition of the surface. In its first two years on Mars, the LIBS instrument was used 160,000 times at 4,500 locations.

The only way to fit this handy tool into the 2020 rover with all the additional and enhanced instruments was to shrink it down, so in 2015, the Space Agency put out a call for a smaller, more efficient version. The Hawaii Institute of Geophysics and Planetology at the University of Hawaii responded with a plan to enhance a compact LIBS prototype it had built. To do this, the university partnered with longtime laser specialist Q-Peak Inc. of Bedford, Massachusetts.

Q-Peak, which has been doing cutting-edge laser work for NASA and other Government agencies since the 1980s, was awarded two NASA Small Business Innovation Research (SBIR) contracts to develop a pulsed laser source far smaller and more efficient than anything on the market, a feat the company pulled off in short order. The work has resulted in a new commercial product from Q-Peak, the first to make laser diode-sized packaging practical for a pulsed-energy laser.

Q-Peak’s Moonbow laser, based on the laser it developed for possible use on the Mars 2020 rover, is the smallest laser of its kind. “This is a new capability,” says company Vice President Eric Park. “It’s never been possible to get 1- to 10-millijoule laser pulses in this kind of package size.” While comparable lasers have been around the size of a shoebox, he says, Moonbow is closer to in size to a matchbox.

It wasn’t a single innovation or a new configuration that dramatically reduced the laser’s size, weight, and energy efficiency, but rather a series of careful, clever, and meticulous engineering, packaging, and material choices, says Anthony Yu, of the Lasers and Electro-Optics Branch at Goddard Space Flight Center. Although funding for the laser came from the Jet Propulsion Laboratory (JPL), Yu oversaw the work. To rethink laser engineering, he says, “you have to involve a multidisciplinary team—an optical engineer and electrical, thermal, and mechanical engineers.”

The smallest, simplest lasers, such as those used in DVD players, are typically diodes that produce low-energy, continuous output or micro-Joule-level pulses. To get the kind of power that will disintegrate molecules, energy has to be stored up and then fired in a short, high-powered burst.

A common method for achieving pulsed laser is known as Q-switching: A diode pumps energy into a crystal, with the Q-switch letting energy build up until the crystal is saturated. At that point, the Q-switch suddenly allows optical amplification to begin, and light intensity builds up rapidly, resulting in a brief, high-energy pulse.

Q-Peak relied on this well-known technology to design both its Mars rover laser and its commercial Moonbow device, but the company managed to pack all these elements into a device a fraction of the size of other commercial pulsed laser sources. “You have to use the right materials, have the right cavity design, control the temperature of all the elements in the cavity,” says Yu. “Then, how do you package it? That’s the optomechanical design.”

According to the University of Hawaii, using Q-Peak’s laser source brings down the size of its entire LIBS system by 20 percent and reduces its weight by 30 percent.

While the laser source on Curiosity’s LIBS system weighs about 500 grams, the one provided by Q-Peak weighs just 65 grams.

There are a number of uses for a tiny, powerful laser, but one of the most exciting to emerge so far, according to Park, is to treat glaucoma in the developing world.

Glaucoma is most commonly treated with eye drops, but in remote locations, it can be hard to provide consistent, ongoing treatment. An increasingly popular glaucoma remedy is laser surgery, which is quick, painless, and effective for about three years. In early 2018, Q-Peak began working in conjunction with a medical equipment supplier on a variant of the Moonbow CB-G laser source, the one most closely based on the Mars 2020 work, as the laser source in a small, portable, rugged unit to perform laser surgery in the field.

“The intent is to build an instrument the size of a small coffeemaker that can be put in the back of a Land Rover and carried from village to village,” Park says. Clinical trials and regulatory approvals are underway, and the treatment is expected to become available within a couple of years.

Other customers to date include the Air Force Research Lab and Sandia National Laboratories, and Park sees potential markets in the oil and gas industry, the Department of Defense, and beyond. A laser like Moonbow can be used to determine molecular composition through not just LIBS but also Raman and fluorescence spectroscopy, making it useful for mining, drilling, industrial process control, and environmental monitoring, among other fields. It can also be used in lidar instruments that have a host of applications, from sensors for autonomous drones—where size, weight, and efficiency are especially crucial—to three-dimensional measurement of mechanical parts. Park notes that non-lethal dazzler weapons, which use intense light to temporarily blind opponents or sensors, are another potential application.

The company is continuing to advance the technology under SBIR contracts with JPL to develop an ultra-compact lidar range-finding capability that will help guide the landing of a probe planned for Jupiter’s moon Europa.

“Anytime you need a 1- to 10-millijoule pulsed laser, it’s possible to build a much smaller, more flexible system with this technology,” he says. “This is a new scale factor that hasn’t been available before.”

Abstract
To pack more instruments into the Mars 2020 rover than its predecessors, NASA had to shrink components. SBIR contracts overseen by Goddard Space Flight Center paid Q-Peak Inc. of Bedford, Massachusetts, to develop a high-powered, pulsed-energy laser of unprecedented tininess for one of the rover’s spectrometers. Based on that work, the company’s Moonbow lasers pack technology that would normally fill a shoebox into a housing the size of a matchbox. These lasers could be used to treat glaucoma in developing countries, as well as in spectroscopy, lidar, and military applications.

Q-Peak Inc.’s Moonbow laser series produces higher-energy pulses than any other laser of its small size, in green and infrared wavelengths. The technology is useful not just for the LIBS instrument NASA needed but also for lidar range-finding, Ramen and fluorescence spectroscopy, and other applications.

The Mars 2020 rover will look almost identical to the Curiosity rover that landed on the Red Planet in 2012. But it will pack more—and more advanced—scientific instrumentation. In an effort to help make that happen, Q-Peak Inc. developed a pulsed laser source smaller than any laser of its kind for the rover’s laser-induced breakdown spectroscopy (LIBS) instrument, which can determine the composition of a surface by zapping it and observing the resulting flash.