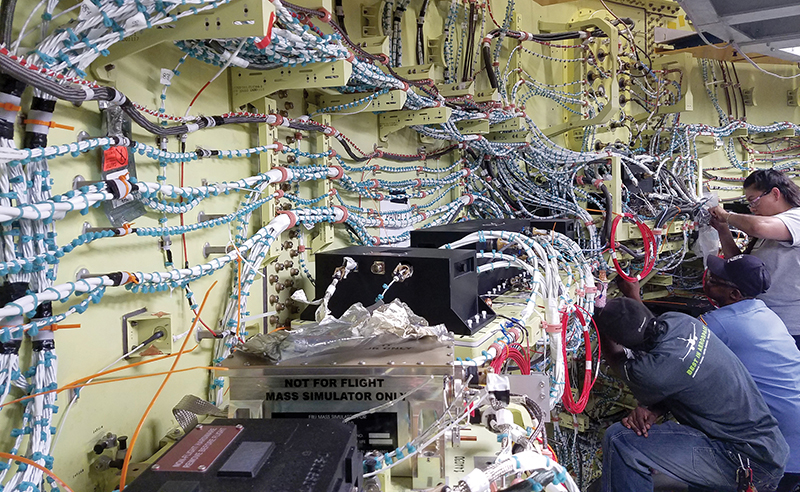 NASA famously uses simulation software to design spacecraft, predict satellite orbits, and train astronauts. But modeling and simulation are powerful tools that can generate valuable information anywhere they can be applied. In the early 2010s, a group at the Jet Propulsion Laboratory (JPL) successfully used simulation software to model the data transmissions, storage, and processing within and among all the sub-systems on a hypothetical spacecraft. The team wanted to predict the performance of a possible replacement for outdated, inefficient spacecraft data networks.

But they couldn’t do it on their own. Instead, they helped enable existing commercial software to simulate what is fast becoming a popular communication protocol in the space community and beyond, known as RapidIO.

A computer communication protocol is a set of standards defining the physical and functional qualities of communication systems within or between computers, known as data networks. Spacecraft data buses were traditionally designed according to a protocol the military established for avionics in the mid-1970s, known as the 1553 protocol, which results in networks that can handle about one megabit of data per second. SpaceWire, a network standard developed in the early 1990s, offers higher speeds—up to 250 megabits per second—but lacks the fault tolerance and predictability the 1553 standard offers. By the 2000s, though, future space exploration demanded interconnect technology with bandwidths up to 10 gigabits per second or even higher for onboard applications.

So around 2010, JPL’s internal research and development program funded a three-year project to explore alternatives.

“We were tasked with looking at all the available commercial standards out there, the notion being that to start from scratch would be hard and wouldn’t be well accepted,” says Raphael Some, chief technologist of the Autonomous Systems Division at JPL, who led that effort at the Center and later across multiple Government agencies and commercial industries. The group assessed 14 different network standards, narrowed those down to four, and finally settled on Serial RapidIO, an open source protocol.

Compared with other candidates, Serial RapidIO offered a scalable bandwidth starting from a few gigabits per second to 100 gigabits per second or beyond. It had the lowest complexity for the capabilities it offered, including flexibility of implementation, multiple data transmission types, high levels of fault tolerance, easy encapsulation of Ethernet and other message packets, and excellent power efficiency. Being an open standard, it was also royalty-free.

But the standard needed augmentation to meet the needs of spaceflight, so JPL wanted a way to simulate its performance and try out modifications, which would be far cheaper than building and rearranging actual avionics systems in a lab.

JPL researcher Yutao He, principal investigator of the trade study for protocol evaluation, searched for software-based modeling and simulation that might provide a solution and ultimately selected a software called VisualSim. Made by Sunnyvale, California-based Mirabilis Design Inc., VisualSim simulates electronics and networking systems.

“It included an off-the-shelf library of compoments commonly used in avionics systems, which could be tailored to meet our technical needs at a low cost,” says He. And the software was able to provide a high-level analysis to simulate a system’s overall behavior and look for bottlenecks, for example, or it could drill down and model the workload on individual components. And it could calculate detailed, complete power consumption values that are especially important to NASA space missions.

“We gave them our requirements, the features we wanted, and they were very supportive in the technical and business aspects,” says He. As JPL started using the software, the company provided technical support and a discount licensing fee for his project.

Mirabilis founder Deepak Shankar describes VisualSim as a graphical environment with a library of standard hardware components, each with its own set of attributes, as well as generic blocks that the user can customize with attributes and parameters. Simulated software, schedulers, interfaces, and other components can also be plugged in. Once a system is built, he says, “the discrete event simulator simulates what would happen in real time, and when.”

In the example of a satellite, he says, systems might operate in one mode during launch, another in the initial orbit, and then two more day and night modes. “We map these behaviors against the satellite hardware platform and make a recommendation for the best configuration for this set of use cases.”

The ability to do all this according to the RapidIO protocol is now a standard feature of VisualSim.

Designed and controlled by a nonprofit corporation, the RapidIO communication protocol has come to be used in the data center, supercomputing, communications, and automation industries, among others.

“The name of the game for spaceflight is high speed at low power and low complexity, and RapidIO did that best,” says Some, adding that the design is also highly reliable and compatible with different types of networks, from copper wire to fiber optics.

After JPL successfully modeled an entire hypothetical spacecraft network using the Visualsim Rapid IO model that Mirabilis developed, Some and a representative from the Air Force Research Laboratory convened a joint Government-industry working group to discuss spacecraft interconnect protocols. The workshop resulted in the formation of the Next Generation Spacecraft Interconnect Standard (NGSIS), which subsequently joined the RapidIO Trade Association and developed the space and harsh environment Serial RapidIO standards. The NGSIS also joined another trade association that was working to develop physical standards for space system electronics.

“Combining physical electronics packaging standards with Serial RapidIO provided an interoperable set of standards for next-generation spacecraft avionics that is being adopted across the industry,” says Some.

NASA’s involvement has led to improvements to the Serial RapidIO standard itself, such as adapting it to the longer wires in spacecraft and increasing speed, reliability, and accuracy, Shankar says. The project also brought more commercial attention to RapidIO in the space and high-reliability markets, in part through the experiments JPL ran, demonstrating the protocol’s high throughput, low latency, and other efficiencies. “After we started this, a lot of people came onboard with RapidIO,” he says.

“We’re moving to use RapidIO as the fundamental interconnect that will be incorporated into spacecraft,” Some says.

It’s just one of many standards VisualSim can simulate, but adding it helped expand the software’s customer base, Shankar notes. “The more libraries we have, the more customers we can access.” And as aspects of RapidIO get incorporated into other standards, “people are asking us to model them because we were there from the beginning.”

NASA, the Department of Defense, and other Federal agencies and their contractors are among the primary users of VisualSim’s RapidIO capability, he says.

Other VisualSim RapidIO users include designers of lithography equipment for semiconductor manufacturing, which runs massive systems with many interconnected processor boards. Companies building mobile phone infrastructure have come on board, as have computer chip manufacturers who want to incorporate the RapidIO fabric into data signal processors on their chips.

Meanwhile, NASA and the Air Force are working on another joint project, to define the requirements for high-performance space computing. The processor will operate with the latest version of Serial RapidIO.

Abstract
In 2010, the Jet Propulsion Laboratory (JPL) sought a new computer communications protocol for spacecraft. This set of standards defines the physical and functional qualities of communication systems within or between computers. JPL settled on the Serial RapidIO protocol and wanted to use VisualSim—electronics simulation software by Sunnyvale, California-based Mirabilis Design Inc.—to model its behavior. The Center partnered with Mirabilis to build a RapidIO simulation capability, which is now available to other industries that use the protocol, such as data centers, supercomputing, communications, and automation.

This screenshot of VisualSim’s RapidIO simulation shows multiple computers of different configurations connected by the Serial RapidIO communications protocol. Graphs on the bottom display the amount of data being processed on individual computers.

Cables line the core stage of NASA’s Space Launch System, connecting flight-guidance avionics to the Orion capsule, ground control, and other systems. NASA’s need for higher-speed onboard electronic and communication networks drove the adoption of the Serial RapidIO communication protocol, but only after the Space Agency funded the development of a computer simulation of the Serial RapidIO standard by Mirabilis Design.