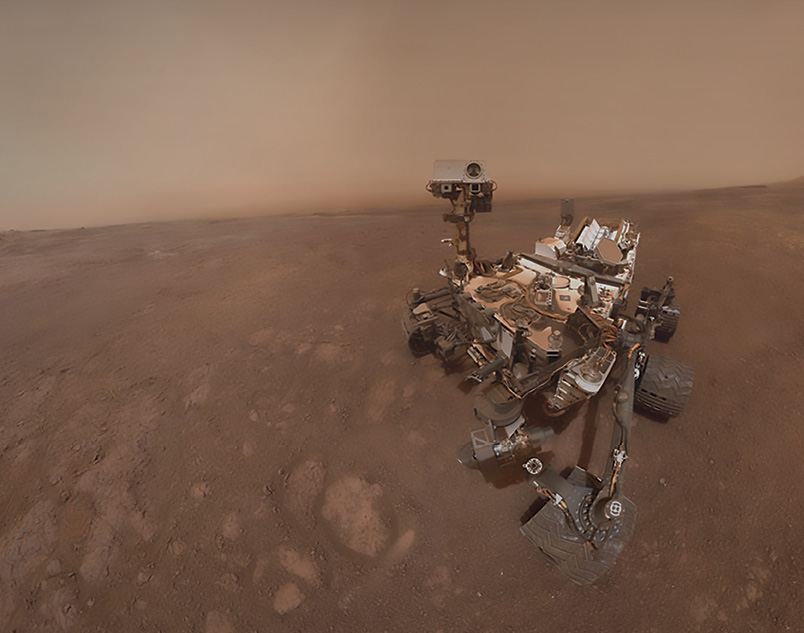 There are so many pieces to a successful mission in space, and keeping track of it all is no easy task. Software designed to simplify the interface between mission controllers and spacecraft data is making it easier than ever to see at a glance what’s happening and where, and when there’s a problem. And now, thanks to a NASA open source software platform, researchers, students, and others are all taking advantage.

The project started at Ames Research Center in the early 2000s, recalls Jay Trimble. The Ames computer scientist was collaborating with colleagues at the Jet Propulsion Laboratory (JPL) on software to support JPL’s Mars rover operations team, and he found it challenging that the software separated displays between disciplines. It was an echo of issues he’d seen in earlier software as a flight controller for the space shuttle.

“In the early shuttle days, all of our displays were designed by discipline. If we had a display looking at payload data, and we also wanted communications data, we had to go to the display in the communications discipline or build our own display with their data,” he explains. Same for electrical systems, data processing systems, and every other kind of data needed to know the status and health of the vehicle: there was no operational way to get it all in one place, or at the level of granularity at which we needed it across disciplines. Yet even team members working on a specific aspect of the mission often needed a more holistic view.

Today, Trimble is part of a NASA team designing rover missions to explore the lunar poles, and the same issues apply. For example, “if I’m looking at a payload on a rover, I need to know where that rover is, what the environment looks like, where we are on our mission operations timeline, and more, to understand the context in which my payload is operating,” Trimble explains. “I need to be able to look at that data and not just ask somebody every time I need it.”

In the early Shuttle days, building and specifying displays was done months ahead of a mission he says. In the run-up to a mission, the different teams would anticipate what they’d need to see and test out displays during simulation and training. If needs changed later, it was extremely onerous to change the display.  “We’d submit display requests, and it would take months to get those built.”

But computers had improved, and Trimble saw an opportunity to integrate those improvements into the flight controller’s user experience as well. He built a team that began designing a new program that would integrate and display the data feeds in a flexible, dynamic interface.

That required a lot of work on the back end, to convert data feeds into compatible formats and display historical data to help visualize trends. But Trimble says he was most focused on the user experience, and on that end, flexibility was crucial. “There have been technological walls around those disciplines. The idea here was to knock those walls down: thinking about the data and how you view it rather than the applications,” he explains. “To do that, we wanted to create an environment where you have all the data in one place, and you can view that data and compose it however you want.”

Trimble’s team began building prototypes around 2005, he recalls, and started with a desktop-based platform that was used in testing but never took off. He then started working on a web-based version with NASA’s Advanced Multimission Operations System (AMMOS) and with JPL, which offers significant advantages for collaboration and portability across centers and partner organizations. The web-based version even works on smartphones, Trimble notes, which “extends control-center decision support to anywhere.”

Today, the platform is called OpenMCT (mission control technologies) and can be adapted for planning and operations of any system that sends data. The web-based platform can display streaming and historical data, imagery, timelines, procedures, and other data visualizations, all in one place, and can be quickly configured and reconfigured.

It was designed for space missions, but Trimble is quick to note that it can be adapted to many other kinds of projects. To facilitate its wider adoption, in 2015 Ames released the software to the public as a free, open source code with an Apache 2.0 license through the software-sharing platform GitHub.

“We are excited to use open source as a model for collaboration,” Trimble says, adding that he is working with other potential partners to continue to disseminate the software as widely as possible.

The reception has been positive, he notes, including at NASA, where the platform has already been used on several NASA missions, from the Jason 3 Earth Orbiter to the MarCO CubeSats that launched with NASA’s InSight Mars lander.

With any open source platform, it’s somewhat difficult to keep track of how it’s being used, since there is no way to know if or when someone is implementing it unless they report back. However, a quick glance at the program’s GitHub homepage shows thousands of “stars” and over 700 “forks,” the latter indicating a user has made a personal copy of the project for their own use, either to experiment with modifications or to use it as a jumping-off point for something new.

Trimble’s team at Ames is also trying to keep track of and publish user stories. One recent addition was the Planetary Society, which adopted OpenMCT to visualize the data coming in from LightSail 2, a spacecraft in Earth orbit propelled only by sunlight.

LightSail 2 launched in mid-2019, but the team had already used OpenMCT for their July 2018 operational readiness test, after hearing about the software from colleagues at JPL. Previously, mission data was stored in a database with a very limited front end, says John Bellardo, the director of California Polytechnic State University’s CubeSat Laboratory, who overhauled the spacecraft’s software system for the Planetary Society. “It was cumbersome: we ended up with only a few composite graphs that everyone could see, and it limited the ability of our students and other team members to do analyses without involving someone who knew how to manipulate the database.”

OpenMCT was much more flexible and user-friendly, he says. “The majority of our students were able to figure out how to use it within three or four minutes, at least enough to play their role in the test.”

Bellardo says his group at Cal Poly has since used OpenMCT on several additional projects, including a satellite launch. He expects his group to continue relying on the platform, in part because he is training students for jobs at places like NASA, where knowing the software will give them a leg up. And of course, no cost is always an attractive feature.

The lack of price tag was also a key enticement for Mariusz Eivind Grøtte, a researcher at the Norwegian University of Science and Technology (NTNU), who was looking into using the software on an upcoming joint NTNU-NASA CubeSat mission.

The nano-satellite will house a hyperspectral imager to map coastlines and monitor ocean color in an effort to learn more about harmful algal blooms and their damaging impacts on marine habitats, which may be increasing, possibly as a result of climate change.

Grøtte said his team had initially considered another program to do the data visualization, “which has similar functionalities, but it costs money.” In contrast, he says, OpenMCT is “available for everyone—and understandable for everyone involved in mission management.”

Abstract
Software designed at Ames Research Center helps mission controllers see at a glance what’s happening and when there’s a problem. The web-based platform, Open MCT, can display streaming and historical data, imagery, timelines, procedures, and other data visualizations and can be quickly configured and reconfigured. Now that it is open source and freely available, it has many users, including the Planetary Society, based in Pasedena, California, which adopted Open MCT to visualize the data coming in from LightSail 2, a spacecraft that is propelled solely by sunlight.

Among other ways OpenMCT software is being applied outside of NASA is a Norwegian project to study algal blooms, seen in turquoise in this image from a European Space Agency satellite, which can be harmful to marine habitats. OpenMCT will help the team manage operations for a nano-satellite that will take images of coastlines from orbit. Image courtesy of ESA CC by-SA 3.0 IGO

When operating a rover or a spacecraft, it is helpful to have access to the full range of data—from electrical systems to weather reports to communications data—on one screen. While working on software to support Mars rover operations in the early 2000s, Ames Research Center computer scientist Jay Trimble began working to build an interface that could do that. It became OpenMCT.