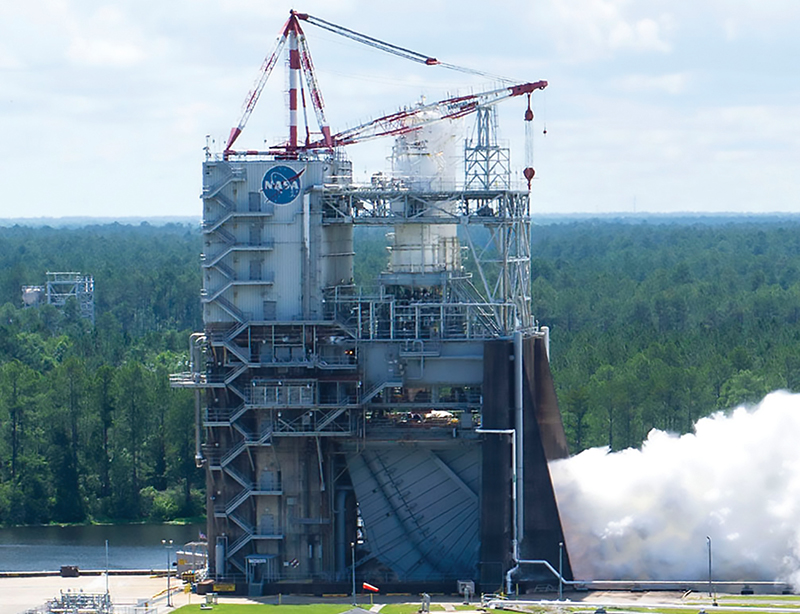 When it comes to monitoring and managing the health of any system, sensors are the front-line technology. They gauge a system’s vital signs, such as temperature, pressure, fluid flows, and voltages—measurements that can be used to detect and even predict faults and failures. But what if the fault is in the sensor?

A company that develops advanced sensor network technology now has an answer, as a result of its work with NASA.

A potentially faulty sensor is a familiar problem to Fernando Figueroa, the lead for autonomous systems and operations at Stennis Space Center. System health management is essential for autonomy, he says. “If you want to make a system autonomous, it has to be able to detect anomalies, make a diagnosis, mitigate any fault, and continue operating.”

NASA has a clear interest in this sort of technology. The Space Agency operates countless large, complex systems wherein small failures can trigger catastrophic ones. For example, Figueroa has been overseeing an effort to implement autonomous operations at Stennis’ high-pressure gas facility, which provides air, helium, nitrogen, and hydrogen to the Center’s rocket test stands. These gases are stored at cryogenic temperatures, making any failure dangerous and costly.

Autonomous operations at the facility are part of the NASA Platform for Autonomous Systems (NPAS) project, which ultimately aims to achieve autonomy of systems on spacecraft such as the planned Gateway lunar outpost. Stennis is the lead center for the project, with Figueroa as the principal investigator.

Over the course of more than 10 years, Stennis has awarded Simi Valley, California-based American GNC Corporation several Small Business Innovation Research (SBIR) and Small Business Technology Transfer (STTR) contracts to develop software and hardware that monitors systems, detecting and predicting faults. Some of the work has focused on health maintenance and predictive fault diagnosis for rocket engines and outfitting engine test stands with a network of sensors. Two 2015 STTR contracts funded a system of standardized “smart” sensors with diagnostic software at the sensor and network levels, as well as secure wireless communications.

All of this led to what’s known as a Smart Transducer Integrator (STI). A transducer is a device that receives energy in one form and converts it to another useful form—typically some kind of signal. One example is the device in speakers that converts an electrical signal into sound. The transducers in this case are the sensors, and the integrator is a device that gathers and synthesizes information from the various sensors to deliver findings on a system’s health.

Part of what made the sensors and integrators smart was their ability to detect faults not just in the system they were monitoring but also in themselves. This was largely thanks to Figueroa’s early involvement in the work, when he suggested American GNC embed a transducer electronic data sheet (TEDS) for each sensor. A TEDS includes specifications and calibration data for a given sensor and can be used to detect the sensor’s deviation from normal behavior. The Institute of Electrical and Electronics Engineers (IEEE) now includes TEDS in its standards for transducers.

“The idea is that sensors should contain information about themselves,” Figueroa says. “TEDS is part of that.” He notes that incorporating IEEE standards lets components be used interchangeably. Likewise, he suggested the company make its algorithms for detecting anomalies in a system standardized and modular so anyone could incorporate them into their system, enabling wider use. Figueroa and American GNC have since developed health electronic data sheets (HEDS), which are a new type of TEDS that enable the use of different fault-diagnostic algorithms in smart transducers using a common, standard format.

The company is now working under a pair of Stennis contracts to hone a unique communication and charging capability for its STI design, which it pioneered with Rensselaer Polytechnic Institute. Rensselaer invented a way to use ultrasound to charge and communicate with a device wirelessly through a metal barrier that would block a radio signal. Charging relies on a piezoelectric element—a substance that generates an electrical charge when deformed. Two transducers are placed on opposite sides of a barrier. One generates ultrasonic vibrations that pass through the barrier and strike the piezoelectric material on the other, which might be a temperature or pressure sensor. The vibrations generate a charge to power the sensor, which then modulates the vibrations reflected back through the barrier to send temperature or pressure data without wires or radio signals.

“Rensselaer invented this, and we came along and made it more practical, smaller, embedded, and better for use in the field,” says Stephen Oonk, chief scientist at American GNC, noting that Rensselaer’s original device covered an entire tabletop. The ultrasonic device can now be mounted on the company’s three-and-a-half-inch STI. “It expands the reach of measurement capabilities and sensing networks to previously inaccessible places,” he adds.

The company’s STI and its coremicro Reconfigurable Embedded Smart Sensor Node (CRE-SSN), both of which benefited from the company’s work with Stennis, are now among American GNC’s commercially available products. Currently, the company is working with NASA and the Navy to further develop the STI for different applications and to expand its capabilities.

The STI translates different types of signals from various sensors and makes sense of them all taken together. Some sensors are digital while others are analog, Oonk notes, and they all have different data rates and require different signal conditioning. Both the STI and the CRE-SSN act as a bridge “between the end user and these sensors of all different types—a device in the middle handling calibration, conversion, signal conditioning, and communication.”

They’ve been used in advanced system health monitoring applications. For example, the company demonstrated a trained neural network on the devices that could detect and classify leaks in a pipeline.

Both products send alerts to clients via smart devices, letting them know where and when a failure is detected. All failures and other data regarding the sensors and the system that’s being monitored are automatically logged in a database.

The technology can be applied anywhere large sets of sensors are in use, and the company expects it to catch on in a number of industries as the ultrasonic through-wall communication capability expands. Francisco Maldonado, American GNC’s director of product development, notes that it could monitor corrosion inside pressure vessels or send signals from sensors on the outside of an aircraft to the inside. In both cases, puncturing the pressurized structure to run a wire through it would compromise its integrity.

“The oil and gas industry would be an important customer,” says Oonk. “They already have sensor networks related to pipelines, but a lot of that is using legacy technology.”

The Navy wants it to communicate through ship hulls, and NASA is interested in getting sensor data from inside pressurized tanks and its vacuum-jacketed pipelines.

“We’re extending the range of sensor networks by incorporating the ability to transmit data and power though barriers,” Oonk says.

“We feel this product has a lot of potential in the market,” adds Maldonado.

Abstract
Stennis Space Center awarded Simi Valley, California-based American GNC Corporation several SBIR and STTR contracts to develop smart sensor networks that monitor systems to detect and predict faults. The technology can also detect faults in its own sensors. The work led to the company’s Reconfigurable Embedded Smart Sensor Node and its Smart Transducer Integrator, which can gather information from many sensors, package it, and deliver it wirelessly.

American GNC’s work on smart sensor networks for Stennis led to the company’s coremicro Reconfigurable Embedded Smart Sensor Node (left) and the Smart Transducer Integrator that can gather and package information from a sensor network (right).

Stennis Space Center has awarded American GNC Corporation several SBIR and STTR contracts over the years to develop smart sensor networks that could monitor rocket engines and systems in and around its rocket engine test stands.