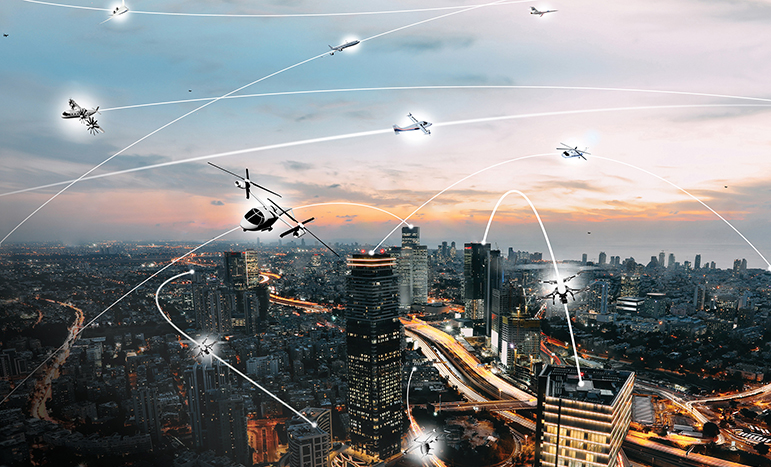 The skies are on the brink of major change. The number of U.S. aircraft flying through the national airspace is likely to multiply many times over in coming years, with the expected introduction of delivery drones, other unmanned vehicles, and, perhaps eventually, air taxis.

“Humans can’t deal with monitoring and managing so many vehicles at a time,” says NASA’s Kee Palopo. “It’s beyond what a brain can handle. Automation is necessary in areas that could support decision making—for example, in conflict detection.”

Researchers and developers working on new aviation technologies need to understand how thousands of new aircraft will interact with each other and the thousands of flights already in the skies. To help them, a team at NASA’s Silicon Valley-based Ames Research Center, including Palopo, is building the Air Traffic Management-eXploration (ATM-X) Test Bed, an environment that hosts simulations of air traffic based on real Federal Aviation Administration (FAA) and other data, sometimes in real time.

The idea is for other technology developers to conduct their own simulations using the test bed’s air traffic management simulation environment and framework.

With the goal of accelerating technology development, ATM-X will enable the aviation community—including government, private-sector, university, and international researchers—to test their technologies without having to create a complete test platform that simulates the country’s complicated air traffic control system. NASA is currently working with the FAA, Boeing, Uber, and others on ATM-X projects, and the Space Agency expects to begin transitioning the platform to general users after September 2020.

“As the airspace management system modernizes,” Palopo says, “it is expected to accommodate new operations, like supersonic flights—which are coming back—air taxis, and drones. The test bed is also able to evaluate this range of technologies.”

In developing the ATM-X Test Bed, Palopo and his Ames colleagues realized that airspace simulations used in technology development were often slowed down by a lack of both quick access to operational data and the tools to build, archive, and recall flight scenarios. Without better simulation tools, simulations were labor intensive to create, less realistic, and less repeatable.

“Using realistic data and air-traffic-management systems make the simulation more convincing,” Palopo says. “The datasets and systems in the test bed let technology developers confirm whether their concept makes sense or not—whether it can work in reality.” Also, ATM-X simulates flight scenarios under various weather and traffic conditions before additional investments are made to mature the technology.

One aspect of national airspace system modernization efforts is training, which is “a really big deal,” according to Chris Brinton, CEO of Mosaic ATM Inc., a Leesburg, Virginia-based company that works on airspace technologies. “Training is really important, especially as aviation technology becomes more and more complicated and as managers become overseers of the whole system rather than making every single individual decision down to the flight level.”

Based at air traffic control facilities around the country, managers keep their eyes on flow control, making sure the controllers don’t get overloaded and that there aren’t too many airplanes in the same place at the same time. The job involves a good deal of human interaction with other managers at air traffic control facilities across the country and with the Air Traffic Control System Command Center, which oversees the national airspace from Warrenton, Virginia.

Mosaic’s training platform, called COMETTS for Comprehensive Environment for Traffic Management Training by Simulation, aims to train the managers in all aspects of the job. “We’ve emulated many of the systems that traffic managers have to use,” Brinton says. “But then we also created a simulation not just of the flights and the flight routes that they follow but also of the people in the air traffic control system, like other traffic managers in different facilities.”

One problem Brinton says FAA experts flagged is that, for staffing and scheduling reasons, air traffic managers are often trained in winter months and get no exposure to summer weather flight scenarios, when traffic can be at its peak level. COMETTS can simulate conditions under any weather or traffic conditions, giving managers experience with the types of situations they’ll actually face on the job, no matter the season.

Brinton has given COMETTS demonstrations to a number of FAA organizations and high-ranking officials, with the expectation the FAA will invest in it to train U.S. air traffic managers. Indeed, the platform was designed with the FAA in mind.

NASA’s Palopo, who worked with Brinton and the Mosaic team on the SBIR project, notes that some of the technology they developed will also help other users of the ATM-X Test Bed.

“When they put this system together, there were many components that needed to be synchronized to work correctly,” Palopo says of COMETTS. “That capability is reusable. It’s part of why NASA and the ATM-X Test Bed team in particular is interested in this project.”

Another technology that Mosaic calls Check Point enables users to go back to a particular moment in a simulation to repeat or work with a variation in the scenario. It creates what Palopo describes as a snapshot of any given point in the simulation, with all inputs saved.

“This capability is useful for users to create training programs of their own technologies and other non-training applications as well,” Palopo says, adding that the technology helps ATM-X Test Bed projects move beyond mere simulation into more rigorous, live-testing conditions.

Mosaic CEO Chris Brinton, left, looks on as a retired air traffic coordinator tests a flow-management feature in the training program the company developed with NASA funding. The platform works within the ATM-X Test Bed, an airspace simulation created at the Ames Research Center.

The skies of the future are likely to be full of all sorts of high- and low-flying aircraft, both with and without pilots, as shown in this artist’s depiction. To help speed the development of technology for these future skies, NASA is building a simulation of the national airspace that researchers can use to test their concepts.