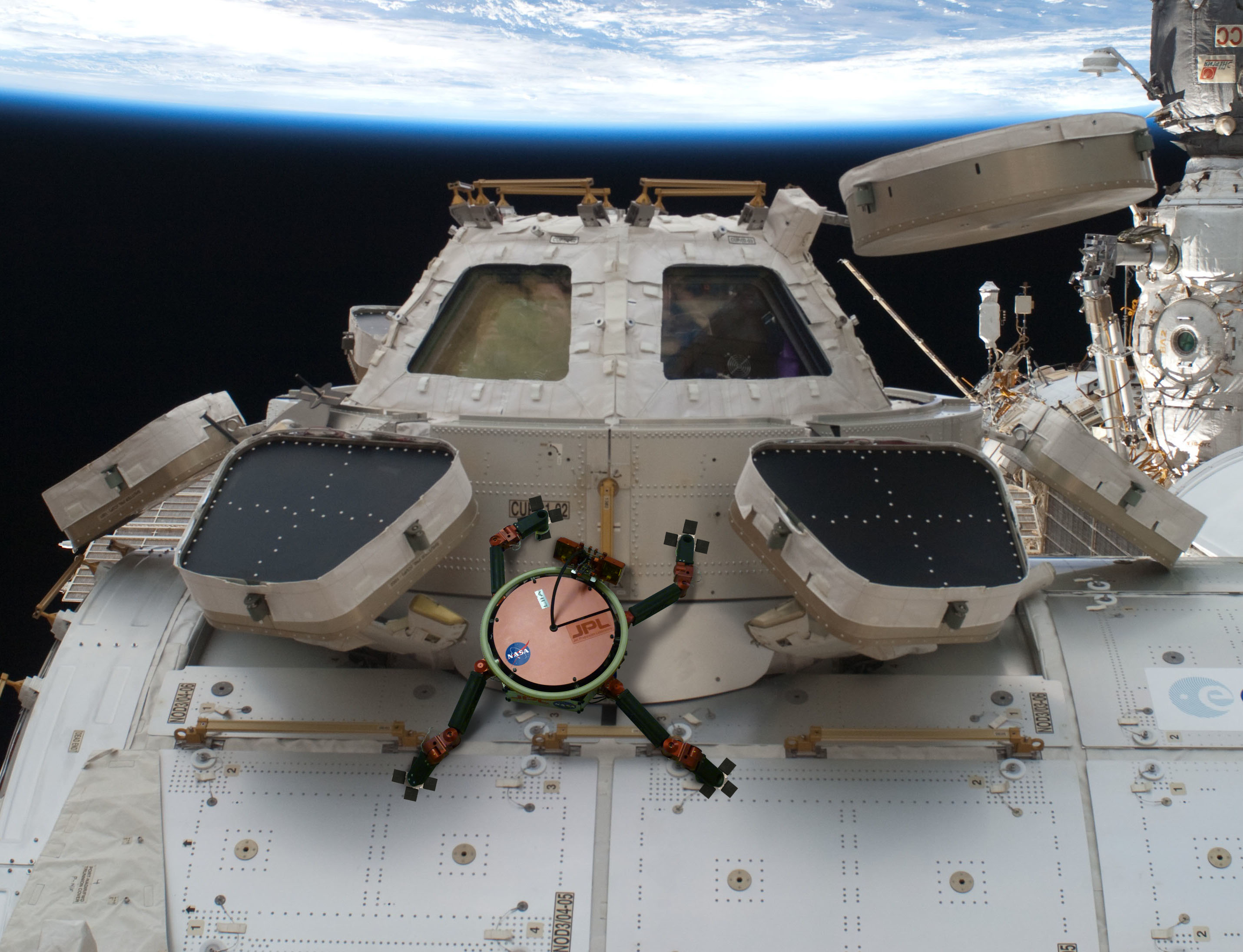 No sooner had the gecko’s secret been cracked than humans got to work trying to copy it.

“It was one of those mysteries that had been around for a long time,” says Aaron Parness, who until recently managed the Robotic Climbers and Grippers group at the Jet Propulsion Laboratory (JPL).

Aristotle was the first to go on the record asking how the gecko is able to scurry up and down surfaces in open defiance of gravity, but anyone watching a six-inch lizard cross a ceiling would have to wonder. The Greek philosopher’s question wasn’t answered until about 20 years ago, in part because the secret lay in a force of physics discovered millennia after Aristotle’s death.

Geckos’ toepads take advantage of this slight attraction by multiplying it. Each pad has about half a million hairs, made of keratin like human hair but much thinner. Each of these setae ends with hundreds of far thinner nanohairs, creating an incredible amount of surface area that, with minimal pressure, completely conforms to the tiniest features of any surface it touches. It’s enough surface-to-surface contact that van der Waals forces become significant.

The concept is simple, but recreating such a surface is not.

From Spacewalks to Circuit Boards

When Parness arrived at JPL in 2010, a decade after scientists had unlocked the gecko’s mystery, he had already been working on gecko-like human climbing technology as a graduate student at Stanford University. (Spider-Man gloves are still in the prototype stage.)

NASA was interested in such gripping technology for space operations. “Moving around in microgravity is more of a climbing problem than a walking problem,” he says, noting that gecko-like pads would be easy to use and radiation-resistant, and they wouldn’t rely on suction cups or other vacuum technology that’s useless in a vacuum.

By the time Nick Wettels joined Parness’ group as a post-doctoral researcher in 2013, the work had turned to grappling satellites for repair in orbit. Wettels is now director of research and development at OnRobot, the first company to offer a commercial robotic gripper based on the gecko toe pad. At the time, he was leading the company Perception Robotics, which he had recently cofounded.

Following his JPL post-doctoral work, and as the company focused on developing standardized products, he says, “the gripper was really a prime candidate.” He saw potential in automated manufacturing, where such a tool could offer advantages over conventional alternatives for lifting and moving objects on an assembly line, for example.

He licensed the underlying technology from Stanford and the California Institute of Technology, which manages JPL—the two teams had cooperated on the work. And Perception Robotics won Phase I and II Small Business Innovation Research contracts from JPL to fund further advances. In 2018, the company merged with Hungarian robotic sensor company OptoForce and Danish company On Robot, which specialized in finger-based robotic grippers. The Gecko Gripper debuted almost immediately thereafter, starting to take preorders that June, with the first units shipping at the end of the year.

“I had never heard of anything like this prior to speaking with Nick,” says Enrico Krog Iversen, CEO of the newly merged company, OnRobot, which is headquartered in Odense, Denmark, but produces the Gecko Gripper near Culver City, California. But he immediately saw its potential.

In particular, he saw a market in the manufacturing of printed circuit boards. These start out full of holes, so they can’t be picked up with a vacuum gripper. Most circuit board manufacturers use finger grippers, but the Gecko Gripper could do the job quicker and with less programming.

OnRobot is still improving the device and releasing new generations, but it’s already come a long way. The gripper can achieve an adhesion force of 35 to 40 kilopascals on a polished surface, compared with a maximum of just four or five kilopascals at the time NASA started working on it. This makes it competitive with vacuum grippers. The company says it can easily lift polished metal weighing up to about 14 pounds.

Wettels notes that this improvement is partly because the company has figured out how to apply even tinier tendrils to the ends of the microstructures, increasing their surface contact.

The gripper is equipped with an ultrasonic sensor to locate its target and a load sensor to determine its weight.

It’s also able to activate and deactivate adhesion using the same technique as a gecko toe: the tiny fibers stick out at an angle, so they only adhere if they’re pulled in the right direction. Pulled the other way, they’ll release their hold.

“It’s really cool to demonstrate it at a trade show, and people’s eyes light up, and they’re like, ‘Whoa, that is magic,’” he says, but he notes that even people working in robotics or manufacturing often don’t intuitively grasp its usefulness.

If it replaces a Venturi pump—a common vacuum gripper that relies on compressed air—a Gecko Gripper pays for itself in seven to nine months, Wettels says. It’s stronger than suction-cup grippers when loaded in shear, and the upcoming version runs on low enough power that it won’t require an external cord, increasing its mobility.

He says the gripper easily grips anything flat and smooth, such as circuit boards, solar panels, glass, and metals, and it doesn’t leave a mark on anything it grabs.

As the company continues to improve the technology and work it into different designs, and as more manufacturers become aware of it, Krog Iversen says he’s confident it will catch on, given its advantages. “It allows us to handle applications that couldn’t be handled by existing technology or had to be handled in a different way.”

Meanwhile, NASA successfully tested its own version for long-term gripping ability in a year-long test on the International Space Station. A gecko-inspired technology will be further tested on the space station by integrating a gecko-style gripper with an Astrobee robot. Astrobee serves as a research platform that can be outfitted and programmed to carry such experiments in zero gravity.

Gareth Meirion-Griffith, who now manages the JPL climbers and grippers group, says human engineers can't take full credit for this remarkable technology: “If nature hadn’t come up with this, I don’t think anyone would have ever thought of it.”

The Gecko Gripper, based directly on technology developed by NASA and Stanford University, is now available for manufacturing facilities, where it can move circuit boards, solar panels, and many other smooth objects more easily than traditional grippers. Credit: OnRobot 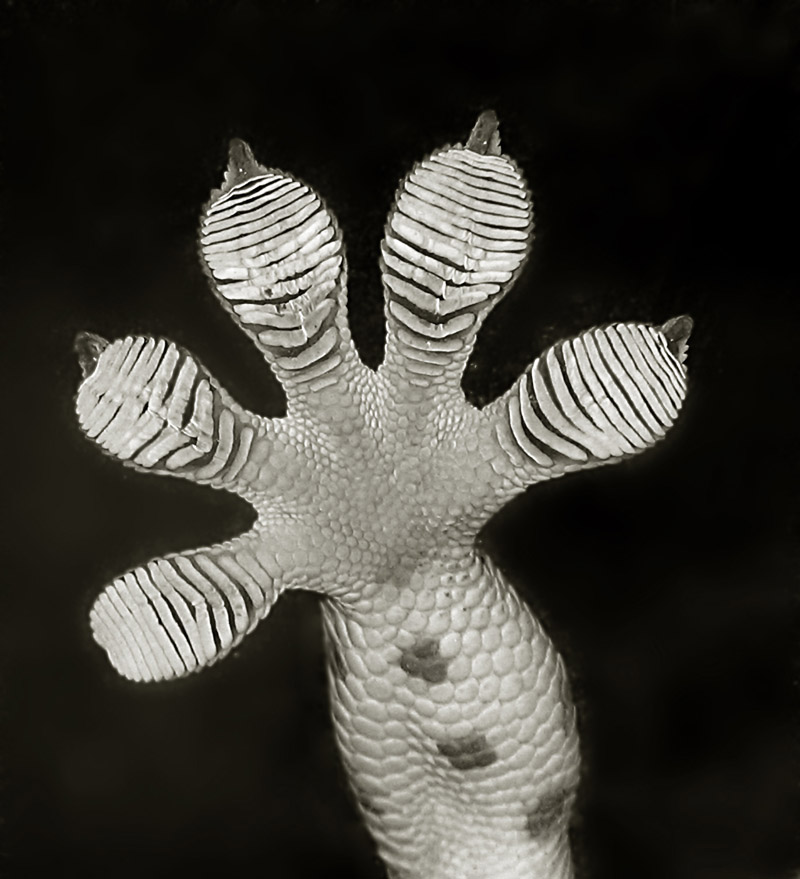 A gecko’s toepads have millions of microscopic hairs that capitalize on a weak electrical attraction known as van der Waals force to let the lizard scale even the smoothest surfaces. It’s a simple concept but difficult to reproduce. (CREDIT: Image courtesy of David Clements)

In this illustration, a Limbed Excursion Mechanical Utility Robot (LEMUR) climbs around the outside of the space station. The Jet Propulsion Laboratory (JPL) considered outfitting LEMUR with its gecko-imitating gripper technology. Credit: NASA 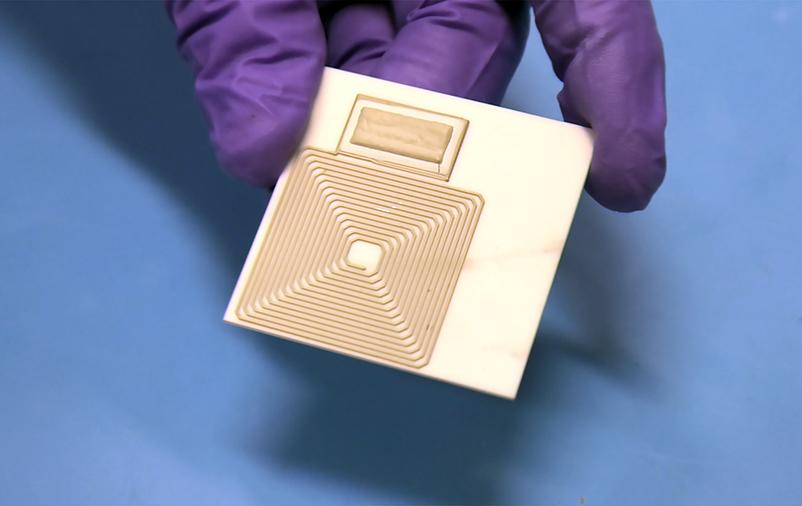 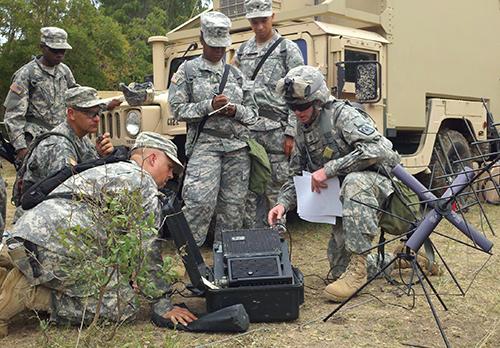