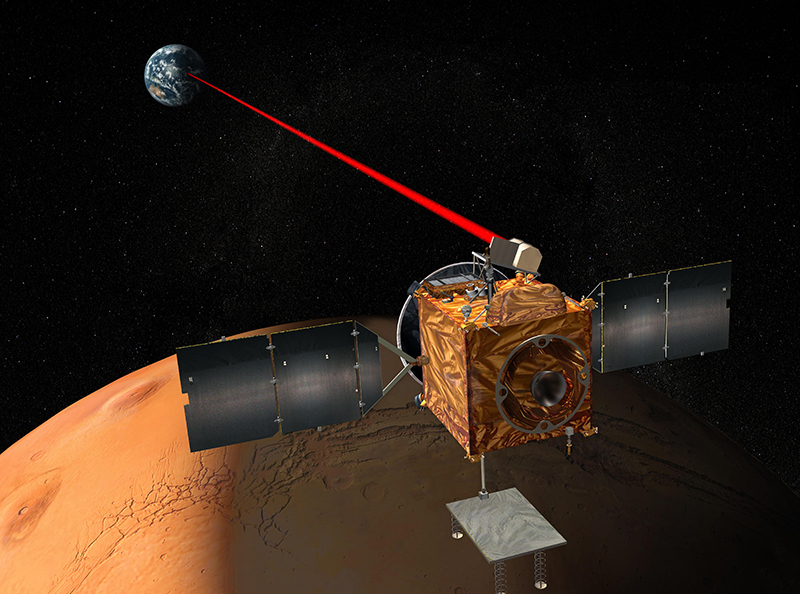 Visible light has been used to communicate for centuries: lanterns on ships and Morse code flashes allowed information to be conveyed at a distance. But now there’s a better way to use light to communicate over even further distances and with far more accuracy – lasers.

An infrared laser can carry information in a similar way to radio waves. By modifying the invisible beam a certain way, the varying modulation can transmit a digital signal. Space is a perfect use for the technology, because there’s no atmosphere or buildings to impede the beam’s path, and compared to other communications standards, lasers offer a wide range of benefits. Light waves can support a high data rate and take less power to run. On Earth, fiber optic cables provide similar benefits to laser communications, but using lasers over a longer distance without any physical cables has proved more challenging.

In 2013, a demonstration on the Lunar Atmosphere and Dust Environment Explorer (LADEE) spacecraft relayed video between ground stations on Earth and the orbiter. The orbiter was able to transmit 622 megabits of data, enough to carry 30 HDTV channels. While future lunar astronauts might not need to watch reruns, the ability to transmit that much data could be a game changer for space exploration. To further explore how this technology could be developed and utilized for future applications both public and private, NASA’s Goddard Space Flight Center in Greenbelt, Maryland, looked into partnering with the private sector.

“Transferring the optical communication technology to the private sector contributes to creating high paying jobs, heightens the competition among companies to bring the cost down, and enhances the system’s efficiency by increasing the data rate, reducing power, and mass,” said Hossin Abeldayem, senior technology manager at Goddard’s Strategic Partnerships Office.

Denver-based BridgeComm, formerly known as BridgeSat, was founded in 2015 to dive into the opportunities presented by using lasers to communicate in space. The company had reached out to NASA centers, and pitched potential uses for lasers at a workshop on advanced communications technologies. Bridgecomm gained some interest from Goddard’s Strategic Partnerships Office, and signed a Space Act Agreement soon afterward.

Over the course of this and the other following agreements, BridgeComm engineers met with their counterparts at NASA to discuss development of the company’s laser systems. A large portion of the collaboration was through consulting, ensuring that the researchers at BridgeComm had access to a wide knowledge base. While working with Goddard, the company also made agreements with NASA Headquarters, NASA’s Ames Research Center in Silicon Valley, California, and NASA’s Glenn Research Center in Cleveland. With all these centers on board, the company could apply NASA expertise to every part of its system.

There are a few key parts to make these systems work. Compared to the wide area a radio signal can cover, lasers from space can only be received across an area the size of a football field. To allow ground stations to reliably pick up the signals from space, BridgeComm and NASA teams brainstormed a way to ensure the beam remained trained on a spot on the planet below. By mounting the entire laser system on a gimbal and using fine steering mirrors, the engineers could ensure the beam didn’t wander as the satellite moved through its orbit. Gimballed optical modules are also used on the LCRD payload. Barry Matsumori, CEO of BridgeComm says that the expertise gained from NASA helped to make the company’s ability to precisely aim the beam and receive the reflected signal work.

Also key to the system are amplifiers. While the lasers can travel a great distance, they need to be powerful enough to travel the potentially interplanetary distances needed for NASA missions. BridgeComm’s amplifiers are able to keep the beams strong, while being small enough to fit on a satellite.

Shining Lights on the Horizon

BridgeComm’s primary customers are those that need high-speed communications but don’t want to compete for bandwidth on the already crowded radio channels. “Radio-frequency spectrum is in short supply,” said Matsumori. “By going optical, we can transmit more data without using any of it.”

Since the completion of the Goddard agreement, BridgeComm has received additional funding from Boeing Horizon Ventures to further build out BridgeComm’s communications technology, making additional ground stations for future satellites that might use its system. There are already interested customers for the BridgeComm system as well. The company is working on laser communications equipment for satellite manufacturer ICEYE and the geospatial data company HySpecIQ, which both hope to use the light amplifiers and specialized gimbals on their new satellite constellations. With the award of the HySpecIQ contract, due for launch in 2022, BridgeComm is one of the first companies to commercialize optical communications technology in space, and Matsumori thanks NASA for the kickstart it gave to the company.

Abstract
After a demo flight, NASA partnered with a private company to further develop laser communications technology, and the is now preparing for launch on multiple satellite constellations. 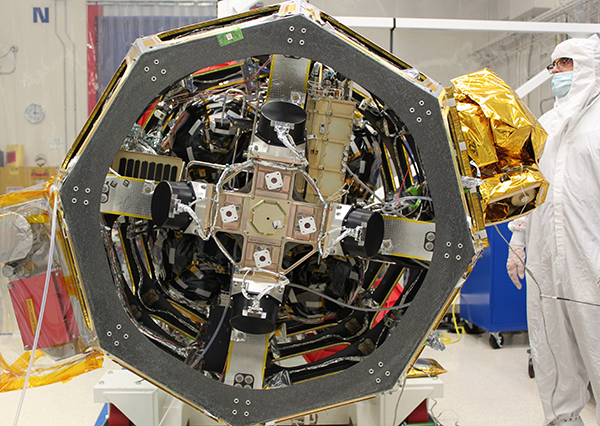 The demo laser system on the Lunar Atmosphere and Dust Environment Explorer orbiter could relay enough data for 30 simultaneous high-definition video streams between Earth and the Moon. The success of the test opened the door for further testing and development of “freespace” laser communications. Credit: NASA Goddard 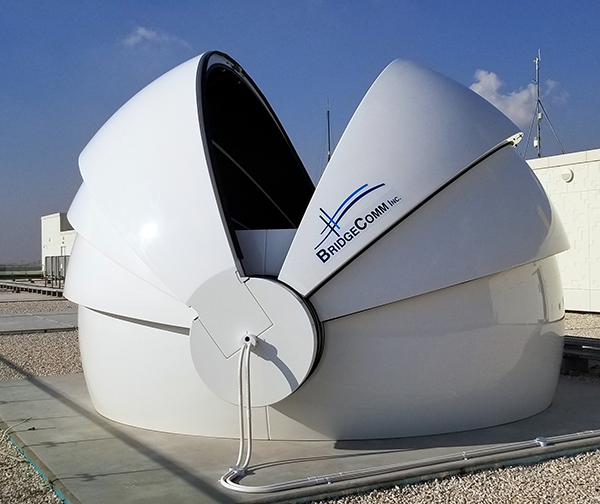 Thanks to Space Act Agreements with various NASA centers, BridgeComm benefitted from NASA’s wide knowledge base to develop their laser communication technology. The company’s ground stations are able to transmit and receive data from satellites in orbit using visible light. Credit: BridgeComm

NASA is exploring the use of lasers to communicate over potentially interplanetary distances. Through collaboration with the private sector, future NASA missions could use a powerful beam to send data back to Earth. Credit: NASA/JPL