Richard Dudgeon, Inc. (RDI), Bridgeport, Connecticut supplies hydraulic jacking equipment, along with engineering and technical support, for heavy lifting projects. The company rents and sells standard jacks and also designs and manufactures custom jacks for specific applications. Among the company's products are a line of high pressure jacks/load cells that evolved from a prototype system developed for a NASA heavy lifting project.

The project involved lifting segments of giant antennas in NASA's Deep Space Network (DSN), which is managed by Jet Propulsion Laboratory. The DSN is composed primarily of three communication complexes located at Goldstone, California; Madrid, Spain; and Canberra, Australia; they are about 120 degrees of longitude apart to permit continuous tracking of a spacecraft by at least one station at all times, despite Earth's rotation. Key facilities are three giant antennas, one at each location, that support deep space (interplanetary) missions; each measures 70 meters in diameter, is 22 stories high and weighs some 8,000 tons.

In 1990, JPL discovered that modifications to the antennas over the years had redistributed weight to the point where bearing failure-and possible collapse of the antenna-was threatened. JPL asked RDI to devise a solution for simultaneous measurement of several key load points within the bearing housings of the 70-meter antennas, an initial step in correcting the alignment.

The job called for a heavy lifting load cell system of extraordinary capability. It had to be ultralight for portability (it had to be carried to the bearing housing level 120 feet above ground via narrow ladders); it had to be extremely powerful to lift the weight of the structure above the bearings; and it had to be thin enough to fit between load points that measure as little as .025 inches. Additionally, it had to be developed within a tight time frame.

RDI assembled a project team composed of its own experts augmented by those of a number of Connecticut firms that assisted in the design, development and ultimately the manufacture of a complete synchronous load cell system. Prototype development took only six weeks and the system was used successfully in the DSN project.

RDI subsequently commercialized the technology with its Dudgeon High Pressure Ultrathin Pancake Jacks/Hydraulic Load Cells, which are designed for applications requiring minimal lift but high portability. They are ultralight as well as ultrathin; a system capable of lifting 700 tons weighs only 79 pounds, where a conventional jack of similar lift capability might weigh half a ton. Available in a capacity range from 50 to 2,000 tons, they are intended for such applications as bridge weighing/lifting, heavy industrial and turbine weighing/positioning, and weighing/positioning of utilities and power plant equipment.

Abstract
Under contract to Jet Propulsion Laboratory, Richard Dudgeon, Inc. developed a heavy lifting load cell system to lift segments of giant antennas in NASA's Deep Space Network. The company commercialized the technology in its Dudgeon High Pressure Ultrathin Pancake Jacks/Hydraulic Load Cells. They are ultralight and ultrathin -- a system weighing 79 pounds can lift 700 tons and can fit between points that measure fractions of an inch. They can be used for bridge weighing/lifting, heavy industrial and turbine weighing/positioning, and weighing/positioning of utilities and power plant equipment. 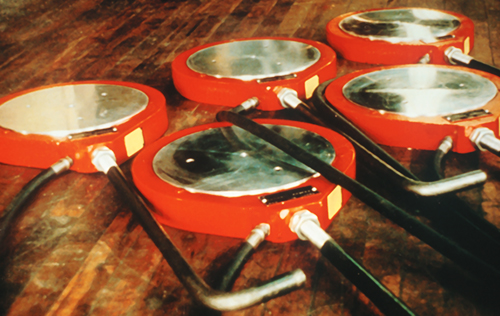 A group of Dudgeon 700-ton load cells/hydraulic jacks, each of which weighs only 79 pounds. 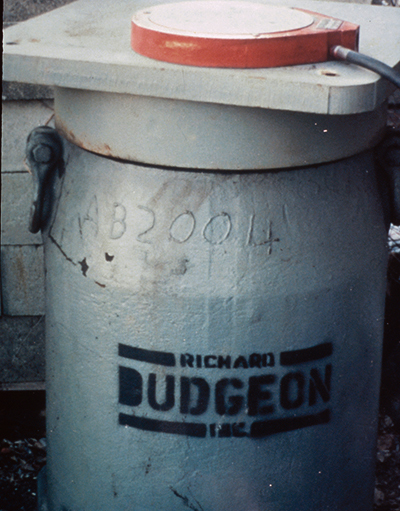 A comparison of the NASA technology load cell (red) and a 3,000-pound standard hydraulic jack of the same lifting capacity.