MiraNet of Palo Alto, California is one of two companies that have spun off from Recom Technologies of Roseville, California. The other firm, Attention Control Systems, Incorporated of Mountain View, California is utilizing intelligent planning software that Recom developed for the Ames Research Center's (ARC's) Computational Sciences Division.

In the fast-paced, head-spinning, computer technology-driven world of Silicon Valley, there is one obvious linkage between the three high-tech entrepreneurial organizations—NASA technology. But first, a little history.

Recom Technologies was established in 1980 by Jack Lee, a 15-year veteran of ARC involvement, working as a contractor employee. Areas of expertise for Lee centered on simulation and modeling, information systems development, engineering applications, artificial intelligence, and expert systems development.

"Entrepreneurial aspirations," got the best of Lee, he says: The ability to pursue those aspirations, particularly as they related to creating products and services resulting from scientific research. After forming Recom Technologies, Lee later was awarded an ARC contract to assist the NASA center in producing software to control a telescope mount. Just a year passed, with Recom staffed with scientists capable in the area of expert systems, software engineering and simulation systems.

Recom Technologies has grown quickly, with the company's nearly 450 employees proposing a broad range of business-oriented research topics, from fiber optic sensors that recognize brain tumors to a virtual reality training system for surgical procedures and next generation video games.

Eventually, two efforts were chosen, along with two subsidiary companies formed to permit ownership by the employees who generated the concepts. Attention Control Systems focused its energies on a hand-held device, employing real-time planning software together with neuropsychology therapy concepts. This device is being prepared as an aid in cognitive rehabilitation of brain injury patients. It can also assist other people with psychological disorders such as Alzheimer's Disease and Attention Deficit Disorder. The core system makes use of intelligent planning software that Recom developed for ARC. The hardware provides patients with detailed daily activity scripts with the help of their therapists and provides a major step into autonomous living.

Recom has committed to spinoff an average of one subsidiary per year.

Sound a little ambitious? As Recom's Jack Lee is fond of saying: "Anyone can provide technology...Recom's people deliver solutions."

MiraNet was founded to bring NASA technology to the Internet and the Web, and its first product, WEXpert™, is a web-enabled version of the NASA-developed, rules-based expert system called CLIPS.

WEXpert guides web visitors to answers in an intelligently interactive process. Although the system appears to be a web site, there are only the WEXpert engine plus a knowledge base in the form of text-based rules. Web pages are automatically generated for each visitor based on the answers given during a consulting session. No technical programming is needed to set up a WEXpert Guided Web, only English-like rules that reflect the type of knowledge or expertise being dispensed.

Where typical web sites are a jungle of information requiring perseverance, search engines, and Internet surfing skills, WEXpert guides you to answers or advice. It is targeting corporations who wish to enhance customer service or provide web-based sales advice. The growing frustrations of telephone menus and waiting for human support are turning a growing population of people to web sites for help. WEXpert will make web sites friendlier and more productive, says Alex Cheng, President of MiraNet. 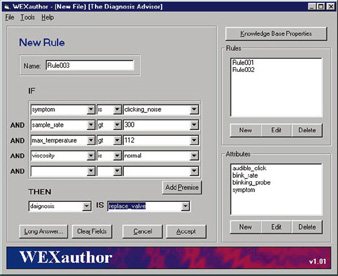 WEXauthorTM This figure depicts a sample knowledge base used to diagnose problems in photography. By defining important attributes and creating rules based on these attributes, the knowledge base designer maps the path to a correct diagnosis.