Planning for “What If” Scenarios

You think you have a busy schedule? Try running the Hubble Space Telescope!

Now the most successful scheduling technology ever developed for NASA is available to customers who want to minimize production costs while maximizing throughput.

The founders of Interval Logic Corporation of Sunnyvale, California were the developers of the SPIKE scheduling system specially created for NASA's orbiting observatory, the Hubble Space Telescope. The operational efficiency of the astronomical eye-in-the-sky was doubled by the scheduling software. This same system has now logged over 60,000 hours of operation in mission-critical applications, managing assets worth billions of dollars.

Interval Logic Corporation was founded in 1995 with the express purpose of providing scheduling and optimization solutions. The group had help in opening its doors, courtesy of the Ames Technology Commercialization Center (ATCC). This hightech incubator is available for companies commercializing NASA technology.

Formerly an ATCC company, Interval Logic has moved on from incubation status to a company producing powerful and sophisticated scheduling software based upon NASA technology. Software offered by the company allows scheduling and optimization of large, complex systems.

Interval Logic has introduced its SPIKE™ scheduling software on a commercial basis, targeted at the semiconductor industry. The product can dramatically streamline semiconductor production. Semiconductor manufacturing operations comprise some of the most difficult and complex of all manufacturing scheduling problems in business today. The frequent challenges of innovation in this industry require adaptation to constant change. Global competitiveness creates intense pressure on production managers to effectively manage manufacturing cycles and cut costs.

To answer semiconductor industry needs for dramatic increases in handling demand, along with optimizing fabrication and backend operations, Interval Logic has created a scheduling and optimization product family.

"Semiconductor manufacturing is not run like a newspaper or steelmill," says Donald Rosenthal, President and founder of Interval Logic. "Simply focusing on dispatch rules for a few pieces of equipment can't maximize throughput across a plant, even in the best of circumstances," he says.

Rosenthal explains that as the product mix varies, as hot orders arrive, or whenever plans are changing, adjustments to flow are needed. That assures that the entire fabrication, assembly, and test floor is optimized for throughput--while maintaining balance across the entire facility. Interval Logic's software is capable of providing a user look-see at "what if" scenarios, and does this with unmatched speed, he points out.

With a click of the mouse, lot rescheduling, machine availability, and product cycle times are effortlessly manipulated. Easy to use, the software planning and scheduling system can provide visibility and control over semiconductor manufacturing operations--from wafer release through final test.

Despite billion-dollar-plus fabrication investments, overall utilization can be as low as 30 percent. That is a tremendous cost drain, Rosenthal says. To optimize profits in these high cost fabrications, chip makers must elevate their utilization factors. "It's a pervasive challenge," he adds.

Interval Logic has evolved a set of products that provide a leverage--the power to act effectively--software for making hard choices easier.

SPIKE is a trademark of Interval Logic Corporation.

Abstract
Interval Logic Corporation is a graduate of the Ames Technology Commercialization Center (Ames Research Center's business incubator). The founders are the developers of the Spike Scheduling system, the most successful scheduling technology ever developed for NASA. This software was used to double the operational efficiency of the Hubble Space Telescope. Today the software is called Leverage and used to optimize all levels of semiconductor manufacturing. 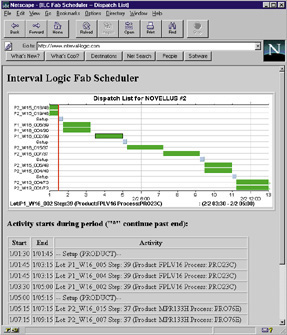 Interval Logic Corporation’s scheduling system is based on software created to double the operational efficiency of the Hubble Space Telescope.