Aerogel is the lightest solid material known. Some call it "frozen smoke"...others see it as "pet cloud."

Despite its density—three times that of air—the material has tremendous insulating capability. NASA scientists have found aerogel critical for several space missions. Part of the Mars Pathfinder mission that landed on the Red Planet in July 1997 included treks of the tiny Sojourner rover. To guard against the rover freezing in the chill of a Martian night, aerogel kept Sojourner on the run. Aerogel is also set to fly on the Stardust mission, being readied for launch in 1999. Stardust is built to haul aerogel that will snag dust samples from a comet and return the specimens to Earth.

Under a NASA Small Business Innovation Research (SBIR) contract with the Kennedy Space Center (KSC), Aspen Systems, Inc., Marlborough, Massachusetts, has manufactured a variety of aerogel products, including aerogel superinsulation. Its advantages are more than clear. A one-inch thick aerogel window has the same insulation value as fifteen panes of glass and trapped air.

Aspen Systems' aerogel-based superinsulation is an innovative, flexible cryogenic insulation with extremely low thermal conductivity. The design of this product takes advantage of the unique properties of specially-made aerogel materials. Aerogels formed at the fiber-fiber contacts of a matrix material force solid heat transfer to occur through the very low thermal conductivity aerogels. Air conduction is greatly reduced due to the very fine pore size of the aerogels.

Founded in 1984, Aspen Systems has matured into a multi-disciplinary organization with a number of products ready for commercialization. Company expertise ranges from energy and environmental systems to specialty materials, photonics, and biotechnology. As a technologically diversified small business, Aspen Systems serves many Federal and state agencies, as well as industrial and commercial clients.

First steps in commercializing the easy-to-use aerogel superinsulation have taken place, notes Hamed Borhanian, Vice President of Aspen Systems. "We are now in the process of securing investor funds to embark on a full scale commercialization," he says.

Superinsulation can be manufactured as fully flexible or as relatively rigid, but not brittle, for insulating a wide variety of objects. An external jacket of pipe, foil, or plastic may be employed, as required, to protect superinsulation from environmental or mechanical impact. SBIR awards to Aspen Systems has spawned a unique aerogel fabrication process, in which the physical properties and thermal performance of the aerogels can be tailored for a given application.

Since the moment Aspen Systems opened its web site advertising aerogel material, hundreds of inquires have poured into the company. This interest has shown the vast potential of aerogels. Potential markets appear ripe for commercial exploitation. Aside from the cryogenic insulation market that constitutes the first tier market for aerogel insulation, other product areas also look favorable. Among these: insulation for offshore oil well underwater pipelines; insulation for shipping containers; refractory insulation for automotive firewalls, floorboards, and exhaust systems; as a high-efficiency filtering media; and as acoustic damping insulation for buildings, process equipment, and headphones.

This smoky hue of a product appears to have a clear future. 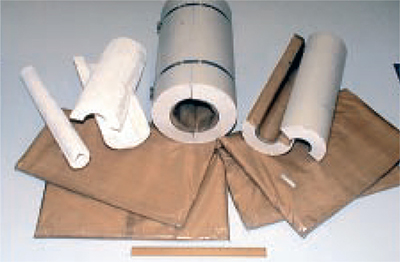 Blankets of aerogel materials act as phenomenal insulators. NASA-supported research has stirred commercial interest in the product for a variety of business and consumer applications.