The ability to use ceramic materials for space-based components has helped reduce product development cycles in equipment manufacturing via rapid prototyping.

Using the most advanced systems available today, Javelin has designed one of their most notable developments, the SteamRoller™ System, a rapid prototyping process that produces functional ceramic prototypes directly from computer-generated models. This fully automated ceramic-laminated object manufacturing—CerLAMTM for short—is a process that builds ceramic prototypes layer-by-layer using ceramic sheets. The prototype is built directly from a computer-generated model without any tooling.

Rapid prototyping is an exploding new technology that is evolving within the design and manufacturing industries. This technology makes it possible to fabricate physical parts, without the need for tooling, through the direct conversion of three-dimensional data. Rapid prototyping uses the principles of slicing, layering, and bonding to build the part.

Javelin's SteamRoller™ System couples the CerLAM™ build process to the conventional laminated object manufacturing (LOM) machine. Prior to the SteamRollerTM, the build process was semi-automatic and required an operator to position each ceramic sheet in the LOM machine for lamination and cutting. Recently introduced by Javelin, the commercially available SteamRoller™ System allows both ceramic and metal sheet materials to be rapidly prototyped on the LOM.

The CerLAM™ process gives design and manufacturing engineers a rapid, cost-effective, and flexible option for ceramic prototyping or when small quantities of parts are needed. A companion to the CerLAM process has been developed at Javelin for metal prototypes and tooling as well.

Initially, Lone Peak Engineering, under which Javelin operates, conducted contract research studies. However, the company's focus has shifted to emphasize design, prototyping, and production of industrial components out of engineered models, such as technical ceramics and advanced polymers. Several developmental efforts have been pursued, such as producing erosion resistant parts, corrosion thwarting pumps, laser guides, and automotive seals.

The company has also manufactured the following products: ceramic golf shoe spikes that never flatten; zirconia ceramic-bladed razor blades for microtomes that never rust, corrode, or need sharpening; ceramic turbines with a hardness approaching that of diamonds and a strength equaling the best German steels; and even bioceramic bones prototyped directly from medical data.

SteamRoller™ and CerLAM™ are trademarks of Lone Peak Engineering, Inc.

Abstract
Javelin, a Lone Peak Engineering Inc. Company has introduced the SteamRoller(tm) System as a commercial product. The system was designed by Javelin during a Phase II NASA funded small business project. The purpose of the invention was to allow automated-feed of flexible ceramic tapes to the Laminated Object Manufacturing rapid prototyping equipment. The ceramic material that Javelin was working with during the Phase II project is silicon nitride. This engineered ceramic material is of interest for space-based components. 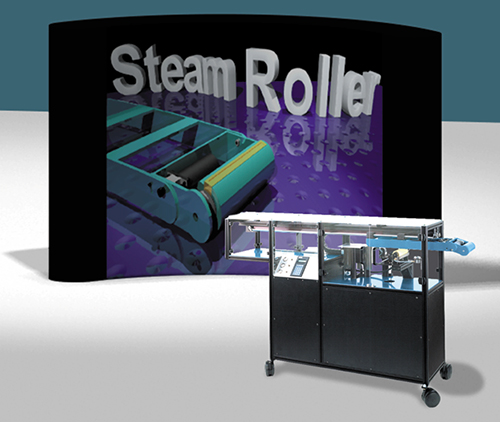